The Egyptian army is bulldozing the homes of citizens in the Egyptian city of Rafah as part of a plan to build a buffer zone with the Gaza Strip, with no alternative plan to relocate the citizens who are left homeless. 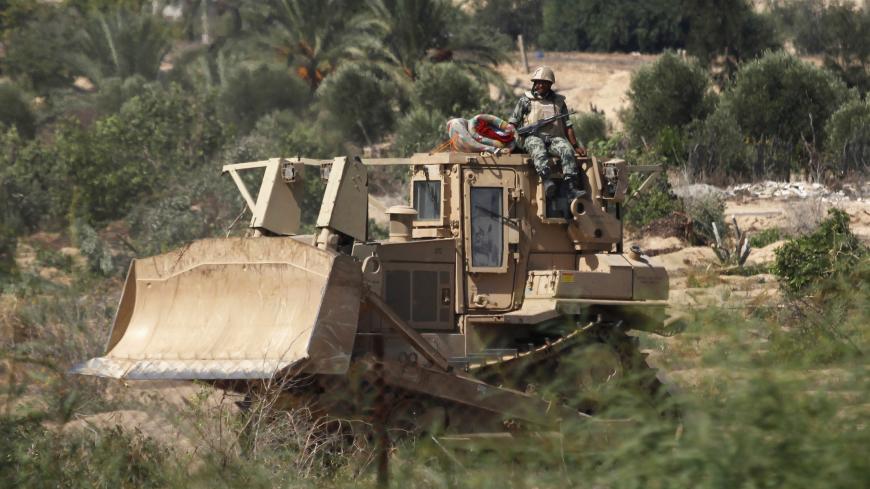 An Egyptian soldier sits atop a bulldozer on the border between Egypt and southern Gaza Strip, Sept. 12, 2013. - REUTERS/Ibraheem Abu Mustafa

The Egyptian army began expanding its operations Oct. 4 to demolish the homes of civilians in the Egyptian city of Rafah as part of the third stage of building a border buffer zone with the Gaza Strip.

Since October 2014, the Egyptian army has worked on establishing a buffer zone along the border line with Gaza as part of the security plan to destroy tunnels used for smuggling between Gaza and the Sinai Peninsula. The Egyptian government accuses Hamas of using the tunnels to carry out terrorist operations inside Egypt.

Al-Monitor received a copy of the press statements of the governor of northern Sinai, Abdel Fattah Harhoor, in which he said that the third phase consists of an area of 500 meters (0.3 miles) wide, thus destroying all the houses and buildings there. During the first and second stages, 500 meters were added to the buffer zone per stage, and with the latest developments, the width of the buffer zone would reach 1,500 meters (0.9 miles) with a length of 13 kilometers (8 miles).

Harhoor noted that the third phase comes in the framework of the army protecting Egypt’s national security and countering terrorism that is seeping into Sinai from the Gaza Strip through the tunnels.

Public anger increased in Sinai following Harhoor’s statements. According to M.A., a citizen who spoke on condition that only his initials would be used and who will be affected by the new forced displacement decision, people accused the government of capitalizing on terrorism to displace them for political ends. He told Al-Monitor, “How can the Egyptian army and intelligence meet with Hamas in the Gaza Strip, but at the same time kick us out of our houses under the pretext of building a buffer zone that protects Egypt from Hamas, saying the latter sends terrorists to Sinai through the tunnels?”

He said, “The army destroyed the neighboring houses and displaced thousands of citizens during the first and second stages along an area of 1,000 meters, turning the houses into military barracks that are off-limits, and no one can approach due to strict military measures, gunfire and erratic raids at night. How do terrorists cross through the tunnels and how does the army control the border area under which the tunnels pass? Why is the army destroying our houses and besieging us? We cannot go anywhere. Terrorists are moving freely in el-Arish — the capital of northern Sinai — and in sight of security headquarters; in response, Rafah residents are displaced 50 kilometers [31 miles] away from the terrorist attacks.”

M.A. noted, “Army forces including military tanks, armored vehicles and a bulldozer surrounded my house and my neighbors’ without prior warning early on Oct. 5 and raided it. They told me to leave immediately with my family and children so they could destroy my house. I tried to convince them to allow me to go back for my possessions, but one of the soldiers threatened to arrest me and accused me of sheltering terrorists.”

He added, “I cried bitterly when I saw the bulldozer demolishing the house that had taken me 10 years to build in the blink of an eye. I wept because I could not defend myself, my family or our memories and the only place we owned. We cannot find somewhere safe to sleep. We no longer have a house or a country to protect us.”

The displaced from Rafah are facing difficulties in finding alternative housing. Hundreds have resorted to building huts from the remains of houses and palm trees in desert areas in the surroundings of Sheikh Zuweid, Rafah and el-Arish. But their presence in these areas puts their lives at risk because there has been constant military combing and launching of random missiles between the army and the Egyptian branch of the Islamic State, Wilayat Sinai, since 2013.

During the first two stages of the buffer zone construction, the Egyptian government paid financial compensation to the forcibly displaced homeowners, which the recipients said was insufficient. There are no indications so far that compensation will be offered to the displaced at this time.

S.R., who did not want his full name to be revealed, is a Rafah citizen who was asked to leave because his house would be destroyed. He told Al-Monitor, “An officer and several infantry soldiers came by Oct. 5 and asked us to leave the house within five hours. I asked them where to go and told them that we had no money to go anywhere. They answered that it was not their problem and that they did not have knowledge of any compensation so far.”

S.R. said, “My family and I worked hard to move our belongings out of the house as we had little time. We have been left for dead and we can only pray and complain to God. I remember our past life when we owned a fruit garden that provided a decent living. But the army bulldozed the land last year and here we are — barely finding a crumb to eat.”

He noted, “We ran out of food 40 days ago, and we had to eat the barley reserves that my father would use to feed the donkey. We ate some vine leaves from our backyard. My wife would bake the vine leaves on a fire she made from the remaining leaves from our garden. We don’t have gasoline or electricity to cook or to operate the household appliances.”

S.R.'s mother refused to tell Al-Monitor about her experience. She said, “There is no use talking about it. But what hurts us most is that they kicked us out and deprived us of our country on the anniversary of the [6th of] October War victory. They said the war liberated Sinai 40 years ago, but now we know what they meant. They should have left us living under the occupation where we could shelter our children. They would have spared us the bloodshed, bitterness and pain.”

A local journalist in northern Sinai told Al-Monitor on condition of anonymity that he received a call from a security source threatening to arrest him for promoting terrorist groups and spreading fake news if he would take photos or write the stories of the displaced citizens and their suffering. He said, “Unfortunately, I cannot report on the suffering of people under forced displacement that happened without prior warning or governmental plans to shelter the displaced, provide for their needs and integrate them into society.”

The residents of Rafah city on the international borders between Egypt and the Gaza Strip said that the army imposed a tight siege on them in August. The army forces blocked the roads leading to Rafah and banned the entry of merchandise, medication, petroleum and food items. Residents from Rafah’s villages and towns told Al-Monitor that the army forbade civilian cars from moving around and shut down communication methods.

Rafah expands about 8 kilometers in length from the Egyptian border with Gaza, reaching Sheikh Zuweid city where the conflict between the Egyptian army and Wilayat Sinai is heated. However, nearly 20% of Rafah nearest to the border has been completely destroyed. The army opened a pathway for cars through the international road as part of the third phase of the evacuation of residents in the early hours of Oct. 5, but the entry of goods and necessities for those still in the Rafah area and its surrounding villages was banned.