In an exclusive report, Al-Monitor witnessed the evacuation of Palestinians from their homes in Rafah. 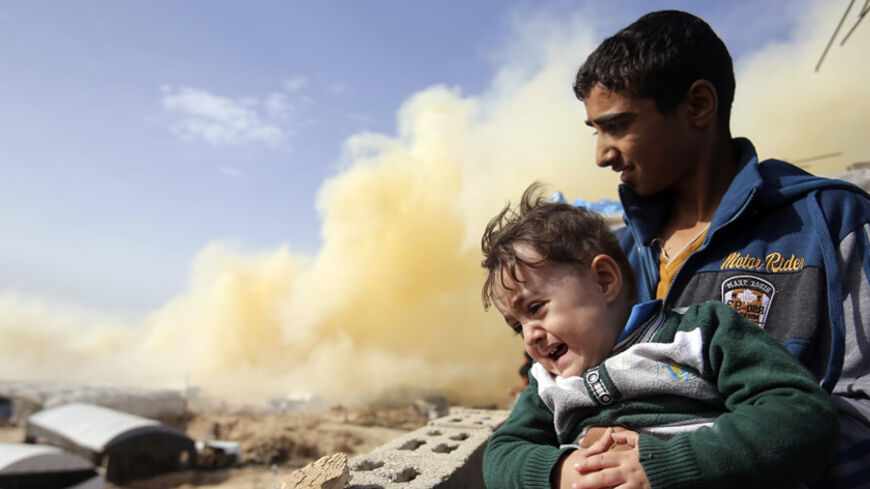 A Palestinian carrying his brother watches as smoke rises after a house is blown up during a military operation by Egyptian security forces in Rafah, on the border with the southern Gaza Strip, Nov. 2, 2014. -

A correspondent in Sinai
November 2, 2014

RAFAH, Egypt — Residents living along the border with the Gaza Strip were seen evacuating their homes, after the Egyptian government ordered them out, giving a 48-hour ultimatum. This decision by the authorities aims at establishing a buffer zone.

Although army forces increased the number of checkpoints along the road leading to Rafah in a bid to bottleneck the movement of journalists, Al-Monitor — after great difficulty — arrived in the border area.

About 200 meters (a tenth of a mile) from the stone wall separating Rafah on its Egyptian and Palestinian side lie hundreds of houses, awaiting demolition. Thousands of residents rushed to collect their belongings amid threats of their homes being demolished with them in it, should they refuse to leave.

As tears stream down his face, Qumbuz, who lives in Rafah's Saladin neighborhood on the Egyptian side, shouts at the top of his lungs, “They want us to leave our home within 10 hours — to leave the home that I struggled to build while the government was absent, marginalizing us. Where should I go?”

Nearby, in front of her four-story house, stands the mother of Qumbuz, a woman in her 70s. The building is located a stone’s throw away from the Gaza Strip. While looking at the building, she said, “We lived here and our ancestors lived here. Many occupation armies have passed by: the Ottomans, British, French and Jews. But we remained here and no one was able to displace us. We remained here and we protected our homeland from their evil. In a flash, our history is being taken away.”

Al-Monitor entered the building and saw men, women and children hastily carrying around pieces of luggage. They seem to want to stop time; the women express their sorrow as they move around, while the men's faces show despair with the tragedy that has befallen them.

“What should I take with me?” asked Qumbuz's wife, while trying to sum up the situation they are in.

She told Al-Monitor, “We only have four more hours and I am still not done with moving all our stuff. How can I pack everything? The officer told us if we were not out by the end of the day, they would demolish the house over our heads.” It was 2 p.m. then, and the curfew would go into effect at 5 p.m.

Another woman said, “They gave us 48 hours to leave, half of which is made up of the curfew. They should have given us a month. It is not that easy. We need to find a place to go to instead of being on the street with our fate unknown. They are telling the media that they have given us compensation. Until now, we haven’t received anything, except humiliation.”

A young child sits on a pile of luggage, playing with her doll. In what seemed like a heartbreaking movie moment, she addressed the doll, saying, “We should hurry up, my dear. We are leaving our home. The army wants to blow us up. We will travel and not come back.”

“More than 1,000 children in schools will be homeless. Have those who are talking about national security thought about them before taking this decision? To the officials, I say, we are the national security and our displacement means that security and the homeland are going down the drain. Over the years, we were the alarm and we protected the homeland from the greedy,” Qumbuz said.

The sound of Apache helicopters, intensively patrolling at a low altitude, mixes with the sound of trucks and animals transporting the residents. Every few seconds, a truck loaded with luggage and people passes by, headed to relatives’ in neighboring areas or to the Desert Thaheer Housing Project.

Mustafa Sanjar, a political researcher concerned with the affairs of Sinai, told Al-Monitor, “The buffer zone project is old and the United States has been supporting it since the days of [former President Hosni] Mubarak and allocated budgets for it by deducting from the US aid to Egypt. The office of military cooperation at the US Embassy was directly supervising its implementation during the Mubarak era. The office staff visited Rafah weekly and periodically, but it failed to implement the project among popular refusal.”

“One cannot overlook the US-Israeli desire to prohibit weapons from reaching resistance movements in Gaza. I do not believe that establishing a buffer zone will end terrorism in Sinai. Tunnels may be a part of the problem, but they are far from being the [only] problem,” Sanjar said.

He believes that the decision to evacuate the residents at this pace will create new crises and tension. “Residents should have been given alternatives before giving them a 48-hour ultimatum.” He said the repercussions of the decision will be reflected in the rights of children to education and health care, and the rights of residents to job opportunities in the areas to which they are heading.

The border area to be evacuated extends from the northern coastal region to the Rafah crossing in the south. It covers an area of 500 meters (0.3 miles) by 13.5 kilometers (8 miles). Statistics indicate the area comprises 802 houses that host 1,156 families. Some families were not eligible for compensation as smuggling tunnels passed through their homes. The number of displaced is estimated at tens of thousands of citizens.

Sinai is heading to the unknown, its fate dependent on the way the regime will handle the situation. Every time the security card is used, the situation is complicated further, especially amid the absence of other solutions Sinai residents have been aspiring to for decades.