The decline of Hezbollah's public image in the Palestinian territories is attributed to its support for the Syrian government. 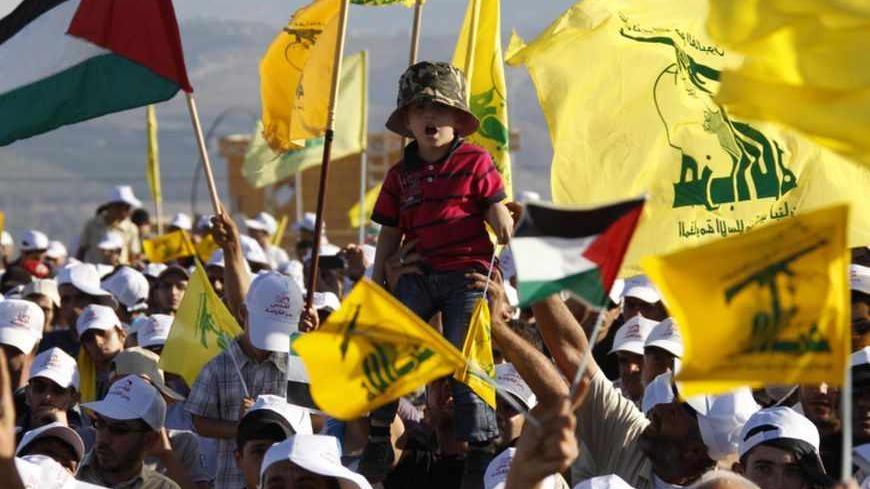 Supporters of Lebanon's Hezbollah wave Hezbollah and Palestinian flags during a rally to mark "Quds (Jerusalem) Day" in the southern Lebanese village of Maroun el-Ras, near the border with Israel, Aug. 26, 2011. - REUTERS/ Ali Hashisho

A recent survey conducted by the Pew Research Center, published on June 7, shows the decrease of Hezbollah’s popularity in the Arab region following its military involvement in the Syrian conflict alongside Bashar al-Assad's regime and its victory over the Syrian rebels in Qusair.

According to the survey, the Lebanese militant group has significantly lost popularity among Palestinians living in the territories due to its stance on the Syrian conflict. While in 2011, 61% viewed the militant group “favorably,” this has decreased to 43% in 2013.

Al-Monitor interviewed several Palestinians in the Gaza Strip and asked their views on Hezbollah, particularly in light of its position on the Syrian conflict. Many argue that this alleged decrease in Hezbollah’s popularity is best understood in light of the sectarian politics that has increasingly characterized the Syrian conflict. The argument goes that predominantly Sunni Palestinians view the Shiite group’s participation in its neighbor’s affairs as largely motivated by sectarianism.

Others believe that Hezbollah, despite being Shiite, has not in fact lost support among the Palestinian public. Hezbollah, they argue, still enjoys Palestinian support and is seen positively by Palestinians due to its strong militancy and resistance to Israel.

For example, Hani Abd Rabbo, 23, believes that Hezbollah’s participation in the Syrian conflict is sectarian-motivated and has further fueled sectarian tensions between Sunni and Shiite Muslims, not only in Syria but also in neighboring countries.

“We have always supported Hezbollah because of its anti-Israeli stance,” the university student said. “Even after it sent its members to fight alongside the Assad regime, I don’t think there has been a major change among Palestinians regarding Hezbollah.” Regardless of what happens in Syria, Abd Rabbo said, Hezbollah will remain “a resistance group that has fought and will always fight against the Israeli occupation.”

He added, “I am not a supporter of the Assad regime, but I am also no fan of the opposition. I know that the conflict is becoming more and more sectarian, and this is what worries me the most. Regardless of all this, I will always remember that Hezbollah once inflicted a crushing defeat on Israel.”

Similarly, Masuud Halawa, a 44-year-old pharmacist from Gaza, believes that it was “pure sectarianism” that pushed Hezbollah Secretary-General Hassan Nasrallah to commit his followers to the battle in Syria. This, according to Halawa, has fundamentally changed Palestinian views on Hezbollah. The group, which had previously been perceived as a "source of pride” for all those fighting against Israeli aggression is now “enmeshed in a bloody sectarian war and has the blood of too many Syrians on its hands.”

“I think Hezbollah has lost its credibility and popularity after their fighters got mired in the Syrian civil war," he continued. "I think if they weren’t Shiite, they wouldn’t have come to the aid of the murderous Assad regime … They showed themselves as a group of assassins and committed awful crimes chiefly targeting Sunni Muslims in Qusair.”

Samer Anabtawi, a Nablus-based political commentator and political science professor at An-Najah National University, said it is “erroneous” to claim that Hezbollah has lost popularity among the Palestinian public. Nonetheless, the Palestinian support for Hezbollah mainly depends on how they view the ongoing fighting in Syria.

“We cannot claim that the view of Hezbollah is generally unfavorable and that Palestinians now fail to see it as a resistance group," he said. "In fact, this is how it is still largely seen by Palestinians because this is what it is. Palestinians do still support Hezbollah.”

Moreover, he explained that Hezbollah has lost its popularity among only those who chiefly view the conflict in sectarian terms. These people, he emphasized, have always been “mistrustful” of the Lebanese militant group, even at the height of its resistance activity during the 2006 July War in Lebanon.

“The public is generally vulnerable to the kind of mobilization based on prevalent sectarian discourse by Sunni clerics who constantly warn of a creeping Shiite threat … They try to present the conflict as primarily a battle for survival between Sunni and Shiiite Muslims. They urge the public to side with the Sunnis in their fight against this Shiite threat,” Anabtawi said.

In addition, Gaza-based writer and political analyst Khader Mehjez told Al-Monitor that only among Hamas followers did Hezbollah lose popularity due to the major rift in relations between the once close allies.

Hamas and Hezbollah’s political relations have notably deteriorated due to their differences over Syria and the dramatic changes of the region's political map, which saw the rise of major Sunni Islamists in Egypt, Turkey and Qatar.

Mohammed Suliman is a Gaza-based writer and human rights worker. Mohammed obtained a masters degree in human rights from the London School of Economics. His writings appeared on different online publications including Al-Jazeera English, openDemocracy, the Electronic Intifada and Mondoweiss. On Twitter: @imPalestine