The new generation of Syrian refugees in Turkey prefer to speak Turkish rather than Arabic in order not to be discriminated against. 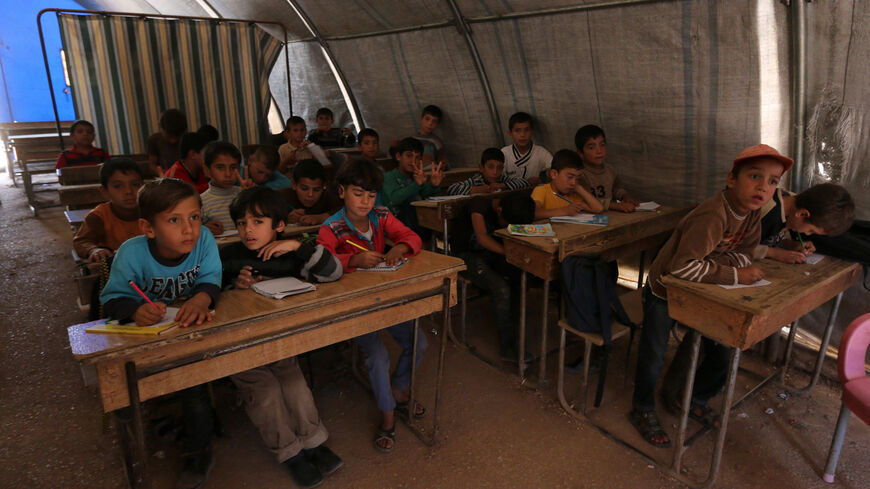 Displaced Syrian children attend a class in Bab al-Salama camp for people fleeing the violence in Syria, on the border with Turkey, Oct. 27, 2014. - Baraa al-Halabi/AFP via Getty Images

Thousands of Syrian children attend school in Turkey every day alongside Turkish students, and communicate in a language that is different from their mother tongue. This situation has affected a large number of Syrian students, especially the young ones, who gradually have started losing the ability to use the Arabic language.

The Turkish government has been implementing an integration policy for Syrian refugees for nearly two years now, which has largely contributed to the decline of the Arabic language among Syrian children, especially since licensed Arab schools in Turkey are costly for most parents, forcing them to enroll their children in free Turkish public schools.

On Oct. 3, 2016, the Turkish Ministry of Education issued a decision stipulating the integration of Syrian children subject to the Temporary Protection Law into Turkish schools, forcing students who were studying the curricula of the Syrian opposition’s Interim Government to transfer to Turkish public schools.

Thus, the new Syrian generation in Turkey is becoming fully proficient in the Turkish language, neglecting at the same time its mother tongue. While most Syrian children are able to speak the Syrian dialect, they lack the skills to read and write in literary Arabic.

Meanwhile, Syrian children sometimes strive to master Turkish at the expense of Arabic, perhaps to escape discrimination, racism and bullying, which have increased in Turkish society in the past two years.

Rana Shalhoub, a refugee from Aleppo, told Al-Monitor that she sought refuge in Turkey nine years ago with her two daughters, Lama and Sarah, who were then in third and second grade, respectively, and decided to enroll them in a Turkish school in Konya province.

“My children cannot read or write Arabic. I find it difficult to communicate with them now or explain school work to them. But every Syrian parent here knows that children need to master the Turkish language to avoid bullying from Turkish students. This is why I'd rather they don’t speak Arabic at school or in public since some Turkish people would refer to them as ‘Souriali,’ meaning Syrian in a very demeaning way,” she said.

Shalhoub added, “At first we were excited about our children learning a new language. But then there was a gap between languages, especially since all school subjects and TV shows are in Turkish, and everything around us is in Turkish. My girls found it easier to learn, especially since they lost interest in Arabic. I tried to read them Arabic stories and make them watch cartoon shows in Arabic, but to no avail.”

Syrian teachers in Turkey warn of the dangers of not being able to teach Arabic in Turkey. The new generation's ignorance of its mother tongue may have social and cultural repercussions, as well as cause identity issues, and an increased feeling of alienation and isolation from society, whether the Arab society from which the children descend or the Turkish society in which they currently live.

A Syrian teacher in Gaziantep told Al-Monitor on condition of anonymity that the Arabic language has started to gradually fade with the closing of the temporary Syrian education centers that taught the Syrian curriculum, and the problem was exacerbated by the Turkish government’s integration decision.

“It all went downhill when Syrian teachers were no longer allowed to teach Arabic and Islamic lessons. Instead, many Turkish teachers are now teaching such classes,” he said.

He noted that Turkey began gradually closing the temporary Syrian education centers in 2016 and expelled many Syrian teachers, especially after the program was stopped by UNICEF in 2021.

Enas al-Khatib, an Arabic language teacher based in Turkey, told Al-Monitor that she started her own project to teach Syrian children the Arabic language online and in person.

“This project was very important for me, especially after my contract with one of the private institutes in Istanbul ended. I had an administrative position and I couldn't believe what I would hear; Arab students would try to speak Arabic to one another and end up with only one Arabic word in a full Turkish sentence. This is why I decided to do something to solve this issue,” she explained.

During the early days of the coronavirus pandemic, she began teaching children the Arabic language online while also urging the parents to encourage children to speak Arabic, in an attempt to rebuild the origins of communication between Syrian children and their mother tongue.

Khatib said, “My initial goal was to teach young children because most of them came to Turkey at a very young age and grew up here mostly hearing Turkish. They despise the Arabic language and have no interest in learning it. Yes, it’s their mother tongue but their Turkish surroundings and their hatred for the Arabic language discourage them.”

She noted, “I once asked one of my 16-year-old students why he doesn’t speak Arabic even though he is Syrian and it is his mother tongue. He told me he was ashamed to speak Arabic at school or anywhere else because he didn’t want Turkish people to know he was Syrian to avoid being made fun of and bullied.”

Khatib added, “That’s how I learned the main reason why the new generation wants nothing to do with Arabic. It is the racist Turkish discourse against Arabs in general and Syrians in particular.”