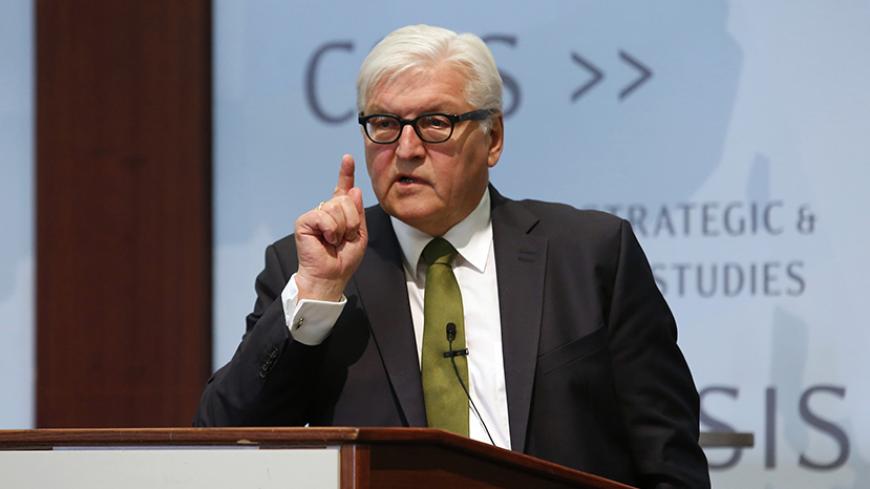 WASHINGTON — As nuclear negotiations with Iran approach another deadline, the United States' main European partners are expressing concern that recent actions by members of Congress have undermined Western credibility in the talks and given Iran more leverage.

Responding to a question from Al-Monitor during a visit to Washington on March 12, German Foreign Minister Frank-Walter Steinmeier said the letter signed by 47 Republican senators warning Iran that a deal would not outlive the Obama administration unless approved by Congress has made an already difficult process “a little more difficult now.”

In the past decade of off-and-on negotiations with Iran, Steinmeier said, the “advantage we [the West] had was to be found in the fact that we said we were credible” and the onus had been on Tehran to prove its ability to live up to its promises. Now, “all of a sudden, Iran is in a position to turn to us and ask 'Are you credible?'” Steinmeier said at the Center for Strategic and International Studies. “We’re not talking about minor details of minor importance.”

Senior French and British diplomats echoed Steinmeier’s concerns and urged Congress to stop interfering in negotiations that may be on the verge of yielding a political framework for a comprehensive deal.

Asked about recent congressional actions, including the letter and proposed legislation that would impose more sanctions on Iran if no agreement is reached this month, British Foreign Secretary Philip Hammond told the House of Commons on March 10, “It could become a spanner in the works.”

The British Embassy in Washington declined to comment further as did the French Embassy. However, a French spokesman for Ambassador Gerard Araud pointed to a March 8 tweet by Araud: “For a foreigner, Washington can be full of surprise.... Open Letter from GOP Senators …”

Cornelius Adebahr, a German who directs the Carnegie Endowment’s Europe program, told Al-Monitor that the letter — masterminded by a freshman Republican senator from Arkansas, Tom Cotton — and the recent hawkish speech by Israeli Prime Minister Benjamin Netanyahu before the US Congress at the invitation of Republicans might give Iran more leverage in the talks.

“The Iranians knew it before,” Adebahr said of the opposition by President Barack Obama's opponents to an emerging nuclear deal, especially among Republicans who since January have controlled both houses of Congress. “If they can point to the US and the West as potentially unfaithful, they will have an advantage in the public debate,” Adebahr said.

Congressional interference could give Iran leverage to demand more upfront sanctions relief or resist demands for additional reductions in its nuclear capacity. Iran is also seeking speedy action on a UN Security Council resolution that would give a deal the force of international law and thus make it harder for the Obama administration’s successor to disavow it.

Numerous commentaries about the Cotton letter — including one  by Iranian Foreign Minister Mohammad Javad Zarif, who has a doctorate from the University of Denver’s Korbel School of International Studies — have pointed out that its main assertion, that Congress must ratify any agreement with Iran, is wrong.

Indeed, more than 90% of international agreements signed by both Republican and Democratic administrations since 1939 have been executive actions, not formal treaties that had to be ratified by the Senate.

Among these agreements have been some of the crowning achievements of US foreign policy, including the 1972 Shanghai communique that began the process of US normalization with China and the 1975 Helsinki Final Act that provided the basis for Eastern Europe to emerge from Soviet domination. More recently, Obama has used executive authority to reach an agreement that removed Syria’s chemical weapons and to restore full diplomatic relations with Cuba.

As president, Obama has sufficient authority to sign a nuclear deal with Iran and to waive nuclear-related sanctions without congressional approval. But a long-term arrangement could require Congress eventually to lift some sanctions and to allow others — such as the Iran Sanctions Act, which penalizes foreign investment in Iran’s oil and gas sector — to expire.

If no deal is reached or Congress blocks implementation of a deal, the consequences could be serious.

A blame game is certain to ensue if the negotiations collapse and Iranian officials are able to point to the US Congress as a justification for rejecting concessions on the size and scope of their nuclear program.

If the United States is seen as being more at fault than Iran, it will be harder to maintain multilateral sanctions against Iran — sanctions that were instrumental in bringing about the election of President Hassan Rouhani and a positive change in Iran’s negotiating posture.

Iranian officials have also warned of dire consequences for Rouhani and his team — especially Zarif — if nearly two years of effort fail to produce a nuclear agreement. Iranian hard-liners would be poised to win upcoming parliamentary elections. Zarif has suggested that he could be impeached.

Iranian Supreme Leader Ayatollah Ali Khamenei has repeatedly expressed skepticism about US trustworthiness and did so again in the aftermath of the Senate letter and the Netanyahu speech.

“The negotiating team that President [Rouhani] has chosen for the talks are good, trustworthy and act based on the interests of the country,” Ayatollah Khamenei said. “But I’m worried because the other side is cunning, deceitful and backstabbing.”