During a meeting between Lebanese Foreign Minister Gebran Bassil and his German counterpart Frank-Walter Steinmeier, Bassil mentioned that some European countries are selecting Syrian refugees to move from Lebanon to Europe based on educational and religious standards. 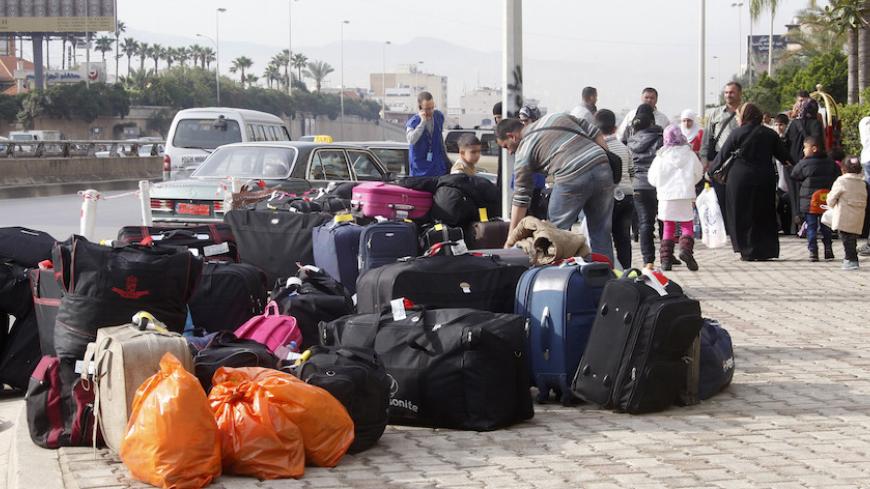 Syrian refugees wait with their luggage and belongings outside a hotel in Beirut to be transported by buses to Beirut international airport for resettlement in Germany, April 15, 2014. - REUTERS/Sharif Karim

Lebanese Foreign Minister Gebran Bassil spoke at a joint press conference with his German counterpart, Frank-Walter Steinmeier, in Beirut on May 15. The German guest talked about the situation of displaced Syrians in Lebanon, and about the need to help the Lebanese state carry such a heavy burden.

When it was Bassil’s turn to reply, he was surprisingly honest by saying, “We are concerned about the strategy followed by some countries to choose the people they receive in their countries based on certain specifications such as culture and religion. For us, such attitudes, in addition to direct financial support for displaced people in Lebanon, are nonproductive positions. On the one hand, [these positions] encourage the displaced not to return to their homeland, and on the other, contribute to emptying the region of its essence; that is, the diversity of religious groups.”

This was a clear statement that involves frank criticism of countries, especially European ones such as Germany, that deal with the issue of displaced Syrians in Lebanon. However, what are the reasons behind it?

Lebanese Foreign Ministry sources following up on the issue told Al-Monitor that what Bassil said to his counterpart Steinmeier reveals a sensitive issue that the Lebanese Ministry of Foreign Affairs has been closely looking into for some time now.

The sources said the numbers of displaced Syrians have been increasing in Lebanon since the start of the Syrian war in 2011 and have exceeded 1 million refugees. Some European countries showed interest in hosting a limited number of refugees from Lebanon, but the sources said, on condition of anonymity, that the Foreign Ministry in Beirut noticed that standards appear to have been set by authorities in European host countries in choosing the displaced people willing to move from Lebanon to the concerned European country.

The Lebanese Foreign Ministry also noted that there are two standard criteria for the filtering and selection process: the first is educational and cultural levels, and the second is religious affiliation. Europeans tend to give a clear advantage to the most educated Christian Syrians.

The government sources said European authorities denied the existence of such discrimination during their negotiations with the Lebanese Foreign Ministry, insisting that they do not rely on any discriminatory criteria in the selection of displaced people. Al-Monitor tried to contact Steinmeier’s office for comment, but none was given. Despite these denials, the official Lebanese point of view is different. This is exactly why Bassil publicly raised this issue in his speech, pointing out “certain specifications such as culture and religion.”

The sources further said that the refugee issue for Lebanon is primarily a matter of principle, in the sense that one cannot deal with a major humanitarian tragedy — such as the tragedy of displaced Syrians — according to any discriminatory criteria. What if a disaster had occurred in a Western country and the authorities there saved university graduates and followers of a particular religion first, before saving other people?

The mere idea of doing such a thing is enough to stir rejection and condemnation. However, this is actually happening in Lebanon with displaced Syrians, according to the sources.

The government sources added that adopting an educational standard in the selection of the lucky ones, reveals another issue that is no less dangerous to Lebanon. Such behavior indicates that European authorities who select the refugees are not dealing with this issue as a temporary displacement, where each displaced person would eventually return to his or her country of origin.

According to the sources, the focus on educational and professional levels shows that the European authorities are being selective about which of the 1.5 million displaced Syrians in Lebanon would benefit their economies, and about who the authorities see as a model to be a permanent immigrant capable of contributing to the migration process set by the countries.

Such behavior means that the rest of the displaced who remain in Lebanon may not return to Syria eventually, and that the West is actually acting on the following basis: attracting the people it deems elite and leaving the rest as a burden on Syria’s neighboring countries.

The first risk is similar to that posed by the selection of refugees based on education level. By selecting Christians, Europeans are choosing the refugees they deem more capable of culturally integrating into their societies. Such behavior on the part of Europeans also indicates that these refugees will not be returning to their countries anytime soon, or that their return is not confirmed or inevitable.

The second risk posed by choosing the Christians of the East to move to Europe is that European authorities contribute in undermining the presence of Christians in the region and in reducing their demographic and geographic presence in the Middle East. Noteworthy is that the Christian community in Syria is the largest in the Levant countries; dispersing this community will pose a great threat for the remaining Christians in Iraq and in Lebanon.

This dangerous move may turn the region into an arena for extremist fundamentalism in uniform communities that reject the other. This is what Bassil meant when he told his German counterpart that the adoption of discriminatory criteria on the basis of religion in the selection of the displaced is a policy that contributes "to emptying the region of its essence" of religious diversity.

Do Europeans understand how dangerous their policies are? The Lebanese government sources hope so, while stressing that they will continue to raise their voices, so that all concerned parties realize the seriousness of this issue.