Is Erdogan changing his tune on Israel?

Turkish President Recep Tayyip Erdogan's silence during the recent Israeli election campaign, despite controversial remarks about the Palestinians, and the reopening of a synagogue in Edrine might signal a change in Ankara's policy toward Israel. 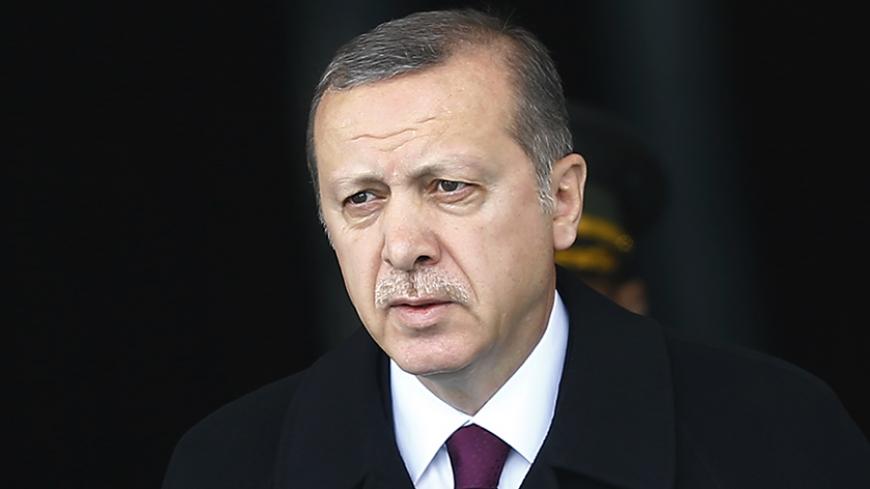 We cannot accept Iran’s efforts to exert its hegemony over the Middle East. Iran is only taking action against the Islamic State to advance its interests in the region and to wrest control of Iraq and Syria.

That was the message delivered March 26 by none other than Turkish President Recep Tayyip Erdogan in expressing his support for Saudi Arabia's military actions in Yemen to prevent the Houthis from seizing control of the country. The Shiite Houthis are considered by many to be the “long arm of Tehran.” In that sense, Erdogan’s remarks were practically a reiteration of an assertion made by Israeli Prime Minister Benjamin Netanyahu in his March 3 speech to the US Congress: “Your enemy’s enemy is your enemy.” Netanyahu's comment was intended to convince the Americans that Iran poses an existential threat not only to Israel but also to the entire region, if not the world.

Erdogan made his remarks on the same day he held a long phone conversation with US President Barack Obama, after a lengthy and troublesome disconnect between the two men, similar to the Netanyahu-Obama relationship. The White House news release said that Erdogan and Obama discussed pressing issues in the Middle East, including Iran’s nuclear program. It did not say whether they touched on Netanyahu’s remarks that Arabs were flocking to the polls “in droves” or his disavowal of the two-state solution during the recent Israeli elections. Netanyahu’s remarks troubled Obama, who neither hid nor tempered his criticism of them.

In contrast, the forceful way in which Obama has expressed himself lately in regard to Netanyahu magnifies Erdogan’s reticence toward the Israeli prime minister’s remarks. Over the past few years, Erdogan has not missed an opportunity to attack the Israeli government over its treatment of the Palestinians. During his election campaign for the presidency in summer 2014, he crossed certain red lines in the language and images he used, calling Israeli politicians “worse than Hitler” and accusing them of attempted genocide in the Gaza Strip.

During the Israeli election campaign, the right wing provided more than enough “old-school ammunition” to Erdogan, who is currently leading his Justice and Development Party in a parliamentary election campaign, with balloting scheduled for June 7. Yet, Erdogan remained absolutely silent. Ibrahim Kalin, Erdogan’s devoted adviser, even published a moderate and thoughtful analysis March 24 about the Israeli election results. Although he mentioned Netanyahu’s controversial remarks, he also tried to convince his readers that the only way for Netanyahu to achieve his goal of a secure Israel is through a just and lasting peace with the Palestinians.

Where were the emotional outbursts and rage from “Erdogan, Defender of the Palestinians” to which we have become so accustomed over the past few years? Where were the shrill accusations that we have grown so used to hearing from him? Not only Erdogan but other government leaders in Turkey also avoided responding to the contentious statements by Netanyahu and Foreign Minister Avigdor Liberman about the Arab citizens of Israel and a Palestinian state.

After the Israeli elections, a lavish ceremony was held March 27 in the city of Edirne, in northwestern Turkey, to reconsecrate the city’s Great Synagogue. In its glory days in the early 20th century, it was the largest synagogue in the Balkans and the third-largest in Europe. The impressive building, designed as a replica of the Leopoldstaedter Tempel in Vienna, was renovated by the Turkish government at a cost of $1.7 million. Just a few months ago, in November 2014, the governor of Edirne province, Dursun Ali Sahin, caused a controversy when he called for the synagogue to be confiscated from the Jewish community and turned into a museum because of what he called “the rumblings of war from the [Israeli] criminals, who are destroying the Al-Aqsa Mosque and killing Muslims there.”

The ceremony was intended to be an expression of Turkey’s tolerance and openness toward the Jews, who had long ago left Edirne. Representatives of the Jewish community were invited to attend, along with top-level Turkish officials, as would be expected according to protocol. A number of them actually showed up. Even Israel’s chief rabbis were invited, but at the suggestion of the Foreign Ministry, they chose to remain in Jerusalem. Israeli diplomats serving in Turkey, however, attended the event.

Deputy Prime Minister Bulent Arinc, who had apologized to the Jewish community on behalf of the Turkish government for Sahin’s remarks, called on all Jews who so desire to come and live in his country. Arinc was trying to supplant any expressions of anti-Semitism, which has been rearing its head in Turkey and which, according to a report by the Anti-Defamation League, is directly connected to public statements by senior politicians about Israel.

Another report, published at the beginning of the year by the Hrant Dink Foundation in Turkey, determined that anti-Semitism is the most common prejudice in the country today. According to the report, during Operation Protective Edge, the Turkish media made no distinction among Jews, Israelis and Zionists and used terms referring to Jews whenever it commented on Israeli actions in Gaza. This makes it impossible to ignore that the message being conveyed by the ceremony at the Edirne synagogue was not simply one of inclusiveness and brotherhood toward the Jews, but also one of reconciliation, or at least of “good intentions” by the Turkish government toward the State of Israel.

The Foreign Ministry in Jerusalem noted that Turkey, like so many other countries, had been disappointed by the Israeli election results. It attributes the change in tone in Turkey to the internal issues Erdogan currently faces. In the upcoming parliamentary elections, Erdogan needs to win an absolute majority to amend the constitution to adopt a presidential system of government, but his chances seem slim. The reasons for this include the obstacles he is imposing on continued peace negotiations with the Kurds, various corruption scandals associated with him that he cannot shake off, devaluation of the Turkish lira and a failed foreign policy.

Namik Tan, who served as Turkish ambassador to both Israel and the United States, attended the ceremony in Edirne. He told Al-Monitor that regardless of whether the relationship between Turkey and Israel was flourishing or at a low point, “The two countries are carbon copies of each other, and we cannot escape our common destiny here in the region.” Thus, once it became clear that the government of Israel had not been replaced, and that there are no indications of an impending dramatic shift in power among the Turkish leadership, it also became obvious the two governments would be forced to compromise and coexist, all the more so now, given the regional challenges they face.