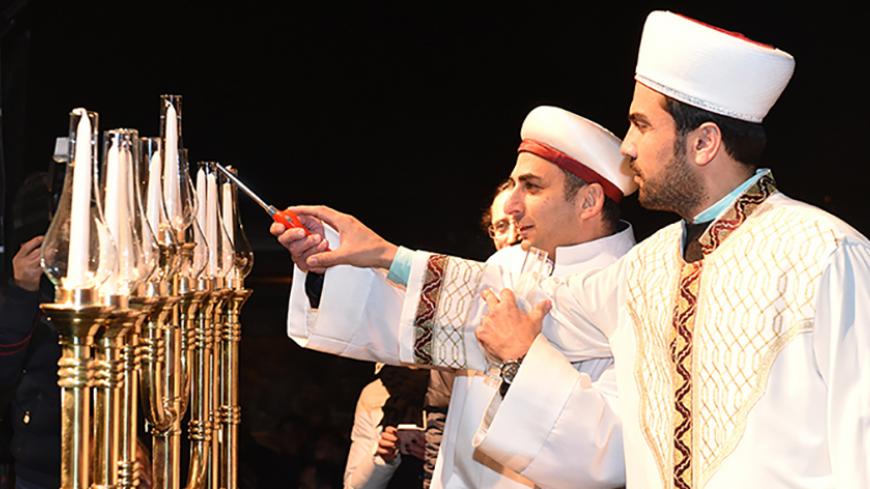 The rabbi of the Ortakoy Synagogue, Akaali Rav Naftali Havela, and the imam of the Ortakoy Grand Mecidiye Mosque, Bilal Dogan, light candles together at the Jewish Hanukkah celebration in Istanbul, Dec. 13, 2015. - Shalom Newspaper

Turkey’s Jews marked a milestone Dec. 13 with a public celebration of the Hanukkah holiday, said to be the first in the republic's history after decades of Hanukkahs marked behind closed doors in synagogues or homes. Members of the tiny community took to the streets for the ceremony, as the tradition requires, lighting thousands of candles at Istanbul’s Ortakoy Square.

The call for the public celebration had come from Ivo Molinas, the editor-in-chief of Shalom, the newspaper of Turkey’s Jewish community. In remarks to Al-Monitor, Molinas said how he would look yearningly at images of Hanukkah celebrations held in city squares across Europe and the United States. “I shared those pictures on Twitter and asked why we shouldn’t do the same in Istanbul,” he said. “The reactions were positive, and then we had talks with the mayor. Due to reservations about security, we did not make an announcement [in advance] and instead sent SMS [text] messages to community members shortly before the celebration.”

Molinas said the sentiment of stupefaction was overwhelming. “There were about 1,000 people of all ages — old, young, children. They were lighting up candles and singing in the street. The elderly Turkish Jews were crying, shedding tears of joy. Some would not believe it. ‘We are out in freezing weather, celebrating our holiday in the street. Is this for real?’ they would ask. Then, they would go to the candelabra and touch it, and would go ‘Oh, it’s really real.’”

Molinas stressed it was the first Hanukkah ceremony held at a public venue in a Muslim-majority country.

Ibrahimzadeh hailed the event as a step forward in breaking prejudices and building intercommunal trust. “The fears that minorities have inherited from past traumas are still alive today. On the other hand, the society at large has prejudices against minorities — confirmed by independent research — due to lack of knowledge or misconceptions about them,” he told Al-Monitor. “We believe those fears and prejudices can be overcome only through joint efforts on the basis of mutual respect and understanding. The reopening of the Edirne Synagogue and the latest Hanukkah celebration are examples of these efforts, which we should strive to enhance together.”

Asked whether the Hanukkah celebration was a step forward for religious freedoms in Turkey, Ibrahimzadeh said, “The event should be seen more as a societal gain in terms of equal and dignified citizenship than as a gain in terms of individual faith and worship freedoms. As such, we should see it as a contribution to efforts to bring our country to the level of democratically advanced, modern nations.”

Along with the applause, however, the Hanukkah event stirred also indignation, mainly in Islamist quarters. The imam, who lit candles together with the rabbi, faced a character assassination campaign on social media. The Felicity Party, the successor of the Islamist party in which President Recep Tayyip Erdogan began his political career, was also incensed. Milli Gazete, a newspaper close to the party, decried the event as an affront to the memory of “martyrs massacred by Zionist Israel,” while Islamist young people held protests. The protesting groups, however, were representative only of a tiny segment on the political spectrum.

Mehmet Gormez, the head of the government-run Religious Affairs Directorate, told Al-Monitor that “what is actually odd is to find such occasions in Istanbul odd.”

Gormez pointed to Istanbul’s long history of religious cohabitation: “Ever since Muslims conquered Istanbul, it has been a city of civilizations, where different religions, cultures and faiths have coexisted in peace. Nowhere in the West are mosques, churches and synagogues to be found together. Istanbul, however, is a city where these three edifices have coexisted together in any neighborhood populated by Muslims. Mehmed the Conqueror himself protected Orthodox Christianity. And when Europe banished all its Jews, Istanbul was the place where they took refuge. Jewish scholars wrote their doctrine books in Istanbul.”

Representatives of the Religious Affairs Directorate and the Foreign Ministry also attended the Hanukkah ceremony, along with diplomats from the Israeli, Spanish and US consulates and members of Turkey’s Christian communities. Erdogan, for his part, issued a congratulation message.

No doubt, the presence of state officials at the celebration had to do with renewed diplomatic efforts to normalize Turkish-Israeli relations.

The bilateral crisis, sparked by the killing of 10 Turks on the Gaza-bound Mavi Marmara ferry in 2010, had nothing to with Turkey’s Jews, but they, too, bore the impact of diplomatic tensions. The deadly Israeli raid fueled a wave of anti-Semitism in Turkey, which saw threats to synagogues and a rise in discriminatory and openly anti-Semitic rhetoric, including by public officials. And beyond the Mavi Marmara crisis, Turkey’s Jews have always found themselves as an addressee to reactions from any spat or political move in Turkish-Israeli relations.

Earlier in December, Turkey and Israel were reported to have reached a tentative deal to normalize relations. The agreement, which is yet to be finalized, is said to include a number of mutual conditions, including Israeli compensation for the Mavi Marmara victims. How the talks will wind up remains to be seen, but their positive impact on Turkey’s Jews is already visible in domestic politics, even if on a symbolic level.

The fact remains, however, that the Jews living in this country are citizens of the Republic of Turkey. As such, they are supposed to be treated equally on the basis of national laws and not according to policies defined by the shifting and slippery ground of diplomacy.