A column published by a Jewish student in Turkey has highlighted the response of the Jewish community to recent incidents targeting them. 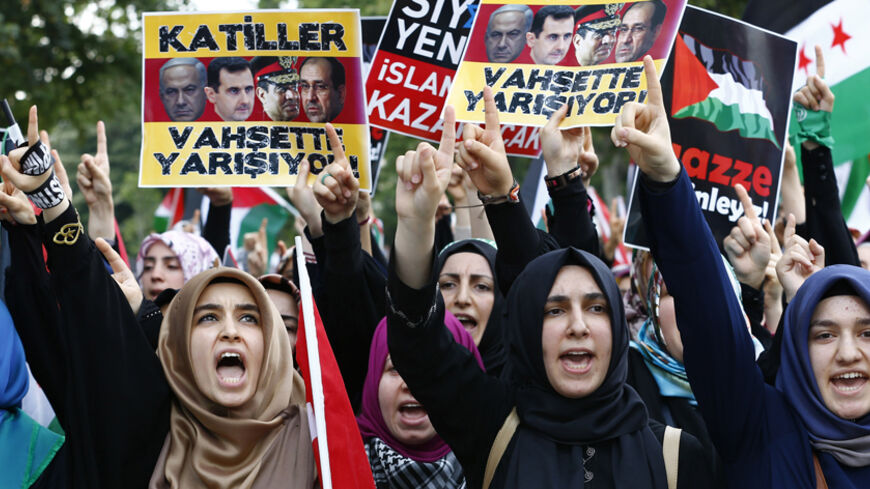 Pro-Palestinian demonstrators shout slogans as they protest against Israel's military action in Gaza, after Friday prayers at the courtyard of Fatih Mosque in Istanbul, July 18, 2014. - REUTERS/Murad Sezer

Because of the anti-Semitism that manifested itself in Turkey following Israel’s recent operation against the Gaza Strip, the column aroused more interest than usual. While Turkey’s mainstream media reprinted Gabay’s piece and expressed concern, some political Islamist media went with such titles as "Super news from Jews: They are leaving Turkey."

Al-Monitor sought statistics after the story appeared. According to statistics of a community high school we were asked not to name, compared with previous years, the number of Jewish youths wanting to leave Turkey has doubled. According to numbers provided to Al-Monitor, in 2012 of 99 students at the community school, 23 wanted to go abroad; in 2013, 18 out of 96; and in 2014, 40 out of 108. The school officials don’t know how many of those going abroad will return after finishing their education.

According to the World Jewish Congress, about 20,000 Jews live in Turkey. The number of youths wanting to go abroad may not sound too high, but, as Shalom said, it should be considered as a warning bell.

Gabay told Al-Monitor, “I wrote about this development to share the effects and concerns the community has been feeling from growing anti-Semitic incidents. My intention is not to say, ‘We are leaving.’ I want to create [a] public and civil society demand for proper legal struggle against anti-Semitism and hate crimes.”

Since the killings of nine Turkish citizens by Israeli military personnel in the 2010 Mavi Marmara flotilla affair, anti-Semitic actions and speech have become a permanent feature in Turkey. Such sentiments peak whenever there is an incident involving Israel.

For example, Dursun Sahin, the governor of Edirne province, wanted to retaliate over the Israeli police's Nov. 5 entry into the Al-Aqsa Mosque. He said, “While those bandits are massacring Muslims there, here we are rebuilding their synagogues," while announcing that the Edirne city synagogue under reconstruction would instead become a museum. Sahin rescinded his decision after negative public reaction. Although his words clearly constituted hate speech, there was no legal action against him. Sahin is the governor of a province where 1,934 pogroms resulted in tens of thousands of Jews fleeing Edirne-Thrace region.

Istanbul's Neve Shalom Synagogue, which was bombed in 1986, 1992 and 2003, was the target of two actions after the Al-Aqsa operation. On Nov. 10, about 100 organized ultranationalist youth wanted to march on the synagogue, and on Nov. 13 a person identified as a schoolteacher hung a banner on the building saying, "Building to be burned."

There is also the social media aspect. Whenever something happens related to Israel, Jewish-named social media users are subjected to sustained insults.

The Jewish community that has been living in this land for 500 years wants an end to anti-Semitic discourse and actions. But how is this to be achieved? The first step would be for influential notables and politicians to be careful with their language, refrain from hate language and denounce those who don’t. However, the Erdogan government's handling of the issue has not shown much promise.