Just hours before the polls open in Israel, Prime Minister Benjamin Netanyahu promises that if he is elected, there will be no Palestinian state, and manages to obliterate the Zionist Camp’s lead in the polls almost entirely. 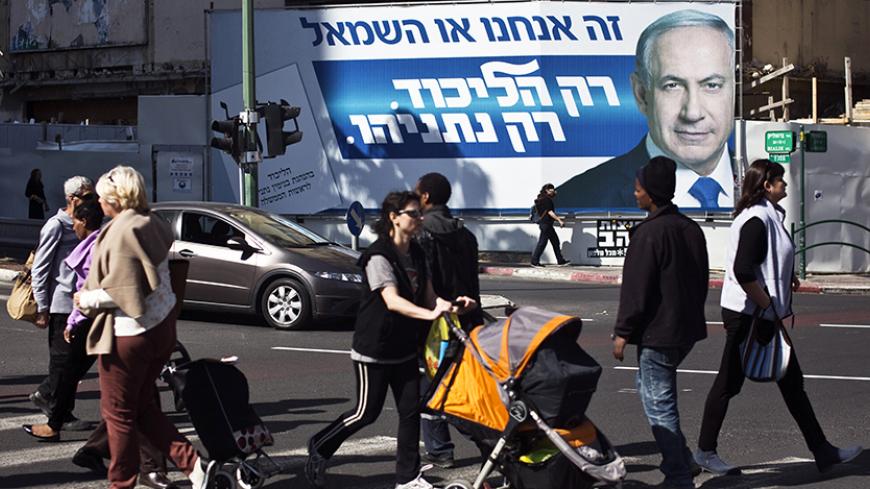 There are just a few hours until polling stations open in Israel, and the political drama has reached its climax. If the Zionist Camp’s candidate for prime minister, Isaac Herzog, had a steady, four-seat advantage over the incumbent prime minister for the past few days, that advantage has been almost completely obliterated within the past 48 hours. Chairman of the Likud Party Benjamin Netanyahu launched a “Gevald!” (“Woe are we!”) campaign and set off on a major interview blitz. He hit almost all the country’s radio and television stations, not even skipping the morning shows and websites, in an effort to relay a clear message to his right-wing electorate: You have no choice. If you vote for HaBayit HaYehudi Chair Naftali Bennett, you are ensuring that Herzog will be the next prime minister. HaBayit HaYehudi may end up being a big and powerful party, but Herzog will be the prime minister, and he will evacuate settlements.

Netanyahu’s comments may have limited basis in fact, but they set off waves, and quickly at that. According to the parties’ own internal polls, over the past few days Bennett began bleeding massive amounts of votes to the Likud, so much so in fact, that he has been forced to launch a “Gevald!” campaign of his own. It is not yet clear if the bleeding has been staunched, but one thing most definitely happened. The euphoria in the Zionist Camp dissipated quickly, while the melancholy mood in the Netanyahu camp is gone. As of March 13, Herzog just about disappeared from the local TV screen. Netanyahu has conquered the media.

On March 16, around 8 p.m., just 12 hours before the polls open, it was the Zionist Camp’s turn to surprise everyone with a reaction of its own. Tzipi Livni, who was supposed to take a turn as prime minister in a rotation agreement she made with Herzog, should their party win the election, announced that she was foregoing rotation after all. There have been rumors about the rotation agreement for weeks, but both Herzog and Livni stuck to their original statement and did not back down from their plan to share the position of prime minister between them. It was only at the very last moment that they decided to change direction.

Livni has been a red flag for quite a few voters identified with the “soft right.” The decision to give up the rotation agreement was intended to increase the Zionist Camp’s chances of drawing voters from the Likud. How effective was it? That is something we will only know on the day after.

Meanwhile, Netanyahu is veering wildly to the right. The prime minister has made one major step to the right after the other with every passing day, in an effort to complete his cannibalization campaign against the other parties in the right-wing bloc. Netanyahu's pragmatism when he formed the current government is gone. There is no sign of it anywhere. In an interview he gave March 16, on the eve of the elections, to the NRG website owned by his confidante, gambling magnate Sheldon Adelson, the prime minister said that if he is re-elected, there will be no Palestinian state. “I think that anyone who moves to establish a Palestinian state and evacuate territory gives territory away to radical Islamist attacks against Israel. The left has buried its head in the sand time after time and ignores this, but we are realistic and understand.”

When asked, “Are you saying that if you are prime minister, a Palestinian state will not be created?” he responded, “Indeed.”

At a press conference he held just a few hours earlier, Netanyahu announced that if Herzog is elected, he will collaborate with the international community to create “Hamastan B” in the capital, Jerusalem.

Polling stations will open the morning of March 17 with a heavy cloud of uncertainty hovering across the Israeli political system. There has never been such a precipitous and fickle campaign here, with this many political tremors reshaping the political landscape. All that we can do now is wait to see whether the big political earthquake really happens.

Netanyahu is fighting for his position, Yisrael Beitenu head Avigdor Liberman is fighting for his political life, Kulanu Party head Moshe Kahlon is threatening the Likud and Yesh Atid leader Yair Lapid is threatening the Zionist Camp. And we haven’t even mentioned the seething ultra-Orthodox camp or the consolidation of all the Arab lists into a single, big party. It is most likely that the results of these elections will lead us down some new dead end. In that case, the only way out will be a national unity government, which cannot be expected to engage in any real governance. But whatever happens, it will be interesting.