The Israeli media chose to ignore political realities and to build up the image of Zionist Camp leader Isaac Herzog instead of taking Prime Minister Benjamin Netanyahu's campaign seriously. 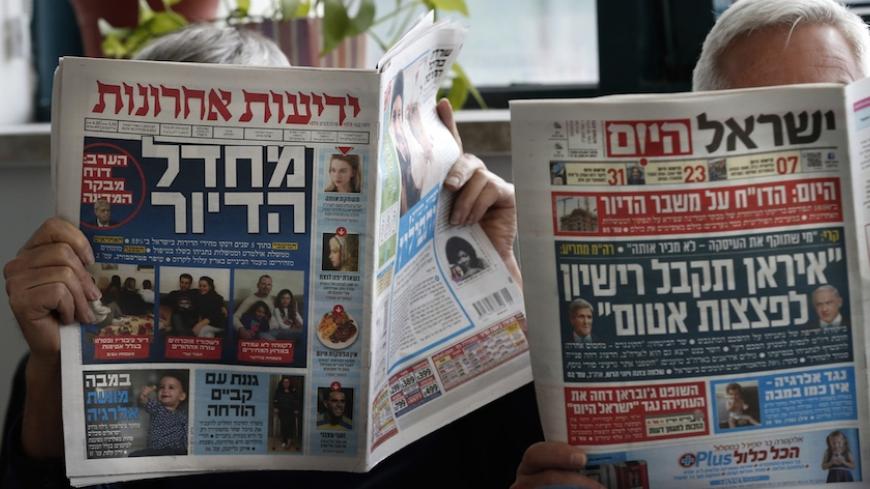 Prime Minister Benjamin Netanyahu was apparently surprised himself by the extent of his victory in the 2015 elections. Not least because that very afternoon, the Likud headquarters was abuzz with rumors that the race against the Zionist Camp was tight, with both parties hovering around a projected 25 seats. Even Netanyahu never imagined a sweeping victory of 30 seats. As time passed, however, and the clock ticked down to the end of voting, he finally realized that he has actually managed to avoid a devastating loss that he himself initiated, and was on his way to his fourth term in office.

Netanyahu is, unquestionably, the biggest surprise of the 2015 elections. The election day momentum was all his, as was the emotional support of the nationalist camp that went out of its way to save his rule. Actually, he and his staff started seeing a return to the Likud by the end of last week. This was most apparent among voters for HaBayit HaYehudi, but it was also evident among the Likud’s traditional base. Something lit a spark under them.

These trends intensified as election day approached. Newspapers, TV news programs and the parties themselves all conducted their own polls. That was why, on election eve, the Zionist Camp pulled out its big announcement that co-leader Tzipi Livni was giving up on the rotation agreement for the premiership, as if it were a rabbit to be pulled out of a hat. They also saw their lead disappearing, even though on March 13, the last day that polls could be published, all indications were that the Zionist Camp still held its advantage.

Anyone expecting the collapse of the Likud to 19 seats or less was proven wrong. Likud Knesset members and ministers alike began reporting that their base was returning home. The phenomenon began with Netanyahu’s March 12 media blitz, during which he was interviewed on virtually every network and later every other platform, too. It was immediately evident that it was working. On Friday evening, for example, Knesset member Ayelet Shaked of HaBayit HaYehudi was the guest of a national-religious family living in one of the settlements. While she was there, she saw with her own eyes how votes were slipping away from her own party, straight to Netanyahu. Shaked, who is secular, left her religious hosts’ home and immediately placed an urgent call to one of the party leaders. “Netanyahu is sucking up all our seats. We’ll only get eight. It’s crazy!” she said. Once the Sabbath was over, HaBayit HaYehudi Chair Naftali Bennett reported the same phenomenon.

As such, the question that should be asked is why the media was oblivious to all this. Why didn’t it see — and report on — these rends? Why did it stick to the idea that Zionist Camp co-leader Isaac Herzog would spearhead a turnover? These questions must be asked and investigated, and not just for the purpose of casting blame. The media must learn from what happened and take account of its mistakes. It is no secret that some major media outlets, headed by the Yedioth Ahronoth newspaper and the Ynet website, waged a bitter, impassioned campaign against Netanyahu. Nor is it a secret that there was a business aspect to their campaign, which was part of their heated competition with the prime minister’s newspaper Yisrael Hayom, published by his sponsor, American billionaire Sheldon Adelson.

But it was not only powerful media outlets that played an active role in the political gamesmanship. Several journalists from the full range of the media spectrum were also in on the game in an unprecedented manner — and that is why they were so blinded, why even the most insightful political pundits had their sensors turned off. The mainstream media played an active role in building up Herzog as an alternative to Netanyahu. It coddled him. It kept mum about his weaknesses. More generally, it collaborated with his campaign, all in the spirit of the old showbiz saying, “Quiet on the set!”

Netanyahu plodded along in place throughout the entire campaign, disappointing the public, including his nationalist base. What was especially disappointing was the flagrant way that he ignored the shockwaves set off by the social protests, insisting on sticking to his agenda of fear mongering and threats. That is why Yair Lapid’s “You’re disconnected” campaign was so effective. The public internalized the idea that in his six years in the prime minister’s office, Netanyahu had done nothing to resolve the housing crisis. That inaction worked to his detriment. So did profligate spending and the way he ran his own household.

As these stories reach their climax, Netanyahu could barely eke out 20 seats in the polls, a symbolic red line. He would have a hard time recovering from anything less than that. For the most part, the media shared in this sense of revulsion with the prime minister, as did even some members of the Likud. Where the media went wrong, however, was letting all this became so much a part of its agenda that it preferred not to read the intelligence reports coming in. After all, they did not coincide with the media’s own election conceptions about Netanyahu.

Journalists spoke to each other as well as to the political group that they wanted to see ascend to the winner’s podium on election night. That looks like why some of them bought into the Zionist Camp’s spin, which in one instance claimed that Herzog was ahead of Netanyahu by almost 10 seats. If only they had cast the slightest doubt at these figures, they would have found that no serious pollster — and no party for that matter — was anticipating anything like those results.

While the media was busy composing its account of his great fall, Netanyahu was in the field, waging the campaign of his life. This effort included more than just interviews and posts on his Facebook page, attacking the publisher of Yedioth Aharonoth, Noni Mozes, relentlessly and escalating his war against the powerful newspaper. He also waged a successful ground campaign beneath the radar of both the media and the Zionist Camp, which was caught in a state of smug complacency and therefore left startled by the actual gap.

Apparently, Netanyahu realized that he could increase the gap between him and Herzog through Bennett’s seats, so he went personally to the strongholds of the ideological right in religious Zionist camp, and when he could not show up in person, he sent his proxy, Defense Minister Moshe Ya’alon. Ya’alon plowed through the pre-military (religious) academies dominated by Bennett, and succeeded in instilling a sense of emergency over a potential rise by the left. Even Bennett himself was conflicted. On one hand, he recognized that if Netanyahu lost, his own HaBayit HaYehudi would be sent to the opposition benches too. On the other hand, he saw his pool of seats emptying right before his eyes.

The results of these elections indicate that the Israeli public has made a clear decision. It voted for a nationalist government with a conservative economic agenda. It is a government that Netanyahu can probably cobble together quite easily. Paradoxically, in his victory speech, the prime minister chose not mention Iran or the Islamic State. Instead he focused on the socioeconomic tasks that lie ahead of him. His remarks were intended for the head of Kulanu, Moshe Kahlon. After all, without his 10 seats, Netanyahu cannot form a new government. Kahlon now bears the hefty responsibility of being the social conscience of Netanyahu’s fourth term.

After being so thoroughly eulogized, Netanyahu will be spending the next few days putting together a new government. While the results are known, they leave one resounding question: How could the media have been so blind?