When considering whether to join a Netanyahu-led coalition, Kulanu head Moshe Kahlon must bear in mind his party's political platform, which calls for advancing an arrangement with the Palestinians. 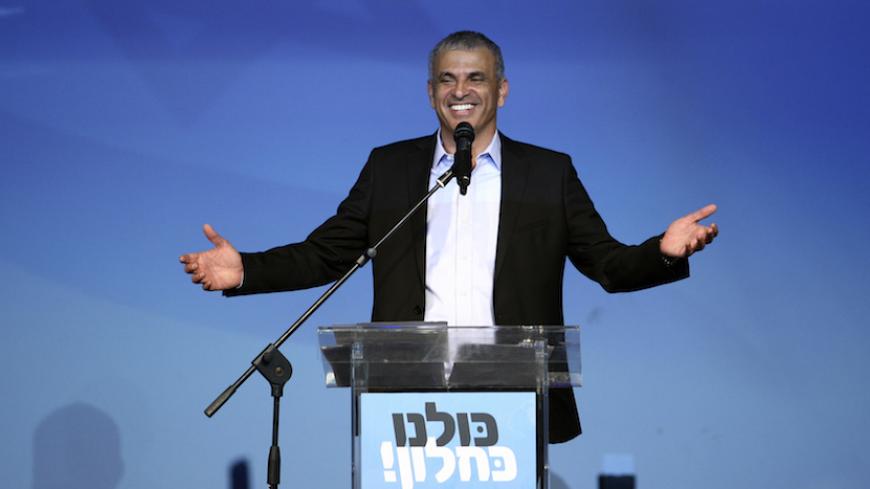 In mid-March, I was in the office of a high-ranking European official who is well versed in Middle East affairs. I told him about creative ideas to promote a peace arrangement and security models that had been entertained that day between representatives from Saudi Arabia, Dubai, Jordan, Israel, Europe and the United States.

Having listened patiently, the official, who asked not to be named, then asked me not to take umbrage at what he was about to say. He started a monologue the essence of which follows: “The armchair you’re sitting in has seen in recent years countless experts, peace activists and Israel’s well-wishers. They each had good intentions and fascinating plans — music to one’s ear. But, my dear friend, I’m sorry to tell you that you — how shall I put it — are a tad out of touch with reality. I have news for you: The Islamic State [IS] isn’t just in Gaza. It has started infiltrating [the West Bank city of] Jenin, too.”

He added, “The Palestinian Authority [PA] is running on fumes after Israel decided to freeze its tax moneys. [The UN Relief and Works Agency for Palestine Refugees in the Near East] has informed us that its budget to assist refugees in the Gaza Strip is running out after the organization had to provide emergency aid to hordes of Palestinian refugees in Syria who have lost their property and livelihood during the civil war. There’s a cap on the amount of money that the European taxpayers are willing to put into the occupied territories, while you’re making no effort to end the occupation and put an end to the conflict.”

Before parting ways, the official wanted to hear my forecast for the March 17 elections. I said the famous Bar-Ilan speech on a two-state solution would serve as an auspicious platform for a national unity government, sending what is known as the “peace process” into slumber.

On my way home from Ben Gurion Airport, I heard on the radio that Prime Minister Benjamin Netanyahu had reiterated his claim that any area to be evicted by the left would be seized by IS. I realized that connecting IS with the West Bank was not just an election spin aimed at driving undecided voters away from the Zionist Camp. The Israeli premier is familiar with the information that is on the desks of senior officials in Europe’s foreign ministries.

There isn’t a single person who has done more than Netanyahu to bring about the collapse of the PA and make people lose trust in the Oslo Accord and their associated leaderships. Despair is the breeding ground for religious-nationalist fundamentalism in the Middle East. The PA’s security bodies and their cooperation with Israel’s defense establishment are the stockade that prevents these extremists from taking over Jenin. And standing guard at this stockade are Egypt, Saudi Arabia, the United States and Europe.

What will happen to this barrier if the 20th Knesset produces another ring-wing, ultra-right-wing and ultra-Orthodox coalition government? What will become of the PA and the security cooperation?

The first answer might come on March 28 from Sharm el-Sheikh, where Egypt will host the 2015 Arab League summit. The main topic that interests Arab leaders is the fight against IS and stemming the expansion of Iran, which has cemented its influence in Iraq, Syria, Lebanon and Yemen. Like all previous summits since 2002, the Arab Peace Initiative will also be addressed by the Arab leaders.

Let me recap the main tenets of this initiative: peace and normalization with all Arab League member states and a just and agreed-upon arrangement of the refugee problem on the basis of UN Resolution 194. In return, Israel will have to withdraw from the territories it occupied in 1967. At a later stage, the Arab League expressed support for a land swap that would allow Israel to annex a large portion of the settlements. The removal of Syria from the Arab League would make it possible to promote the initiative without having to address the issue of the Golan Heights in the foreseeable future. This initiative was adopted by the Organization of Islamic Cooperation, which consists of 57 states.

A high-ranking Saudi representative who attended the meeting at a European capital stressed that an Israeli agreement to hold negotiations with the Palestinian leadership on the basis of that initiative would facilitate productive cooperation in stemming radical Islam and the Iranian threat.

This lucrative offer will be placed before the new government to be formed in Israel after having gathered dust on the desks of Israel’s previous governments over the last 13 years. It is hard to believe that a government consisting of the Likud, HaBayit HaYehudi, Yisrael Beitenu, Shas and Yahadut HaTorah parties will be willing to touch this document with a 10-foot pole. HaBayit HaYehudi leader Naftali Bennett and Yisrael Beitenu head Avigdor Liberman would not hear of evicting as much as a single house in a single illegal isolated outpost.

All told, however, the number of seats of these parties does not reach 61 (out of 120). Assuming that a retraction from the two-state solution will block the way to a partnership with the Zionist Camp, Netanyahu cannot cobble together a government without Kulanu. What this means is that the finance portfolio will be given to Kulanu head Moshe Kahlon. Moreover, this party that has pledged to make a change will have to double cross its voters, who gave it a shot at contributing to a significant reform, not just reduce cellular phone bills (for which Kahlon became famous).

Kahlon’s senior leadership partners, former Ambassador Michael Oren and retired Gen. Yoav Galant, have repeatedly said that Israel’s strategic interest is to have a diplomatic solution that will guarantee its future as a Jewish and democratic state. The party’s platform pledges to promote an arrangement on the basis of the letter that US President George W. Bush sent to Prime Minister Ariel Sharon in April 2004, following the plan to withdraw from Gaza. The letter asserts that the United States supports the establishment of a viable, independent Palestinian state. Further, the platform also promises to jump-start strategic and diplomatic moves that will enhance Israel’s security, while emphasizing the relations with the incumbent US administration.

How can this be achieved with a prime minister who the president of the United Sates refuses to see and a defense minister (Moshe Ya'alon) who accused the US secretary of state of false messianism? The answer to this question — the key question of the 2015 elections — is in the hands of one man: Kahlon.