With Foreign Minister Avigdor Liberman joining the opposition, the balance of power in the Knesset is clearly in favor of those supporting a two-state solution. 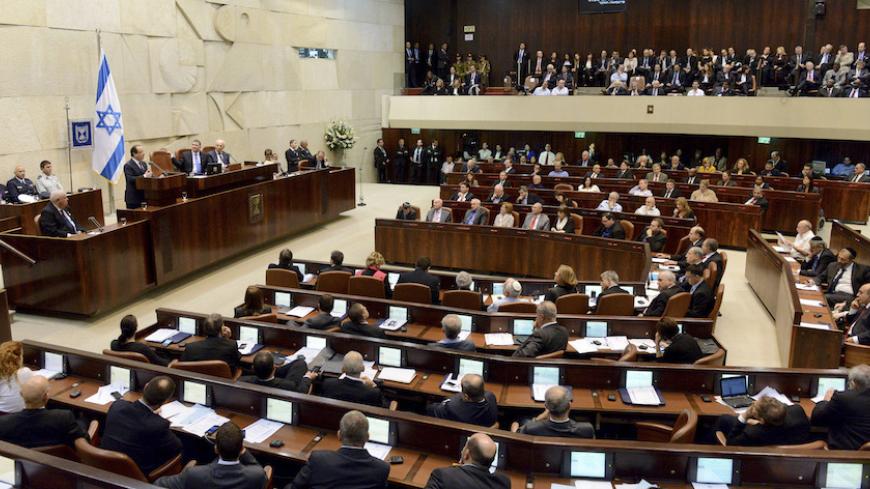 The floor of the Knesset is seen during a speech by French President Francois Hollande, Jerusalem, Nov. 18, 2013. - REUTERS/Debbie Hill

Avigdor Liberman’s decision to forgo the Foreign Ministry and move to the opposition benches splits the 20th Knesset almost equally between the coalition and the opposition. There are now 61 Knesset members who support the new government and 59 who oppose it. But this ratio is just one part of the story, and not necessarily the most important or interesting. The real story is the balance of power between the camp that prefers to maintain the status quo over any diplomatic arrangement that involves the creation of a Palestinian state, and the camp that supports a diplomatic arrangement that will result in the creation of such a state. In between, there is the ultra-Orthodox camp, which is more interested in initiatives for reaching some arrangement that will keep its young men out of the army than in those designed to advance a diplomatic arrangement with the Palestinians.

Despite the victory cheers echoing from the prime minister’s residence on Balfour Street in Jerusalem, March 17 was hardly the great day that the ideological right made it out to be. The hard core of the Israeli right amounts to little more than a third of all Knesset members. There are the 30 members of the Likud Party, eight more from HaBayit HaYehudi and two or three out of the five members of Liberman’s party. Pollsters may have become the media’s punching bag after the last election, but they were not so wrong after all. The balance of power in the 20th Knesset will be the same as it was in the 19th, just as they predicted. Now, as then, the ideological right is actually smaller than the rest.

The previous Netanyahu government was dependent on the 19 seats of Yesh Atid leader Yair Lapid, who forged a brothers' alliance with the head of HaBayit HaYehudi Naftali Bennett. Those Yesh Atid seats included such senior party members as former Shin Bet head Yaakov Peri, Yael German and Ofer Shelah, whose diplomatic approach is closer to that of Meretz Chair Zehava Gal-On, Zionist Camp leader Isaac Herzog and even Joint List Chair Ayman Odeh than to that of Prime Minister Benjamin Netanyahu, Defense Minister Moshe Ya’alon and Likud Knesset member Miri Regev. The unnatural mating of the previous government was complemented by Hatnua's Tzipi Livni, who is at least seven times farther away from Intelligence Affairs Minister Yuval Steinitz on anything to do with a two-state solution than she is to chief Palestinian negotiator Saeb Erekat.

As of the time of this writing, Kulanu, headed by Moshe Kahlon, fills the role played by Lapid and Livni’s parties in the previous Knesset. Kahlon himself and his colleagues in the new party’s leadership all have a long list of public statements in support of shattering the status quo between Israel and the Palestinians, which can be attributed to them. These statements, and the party’s platform for that matter, can hardly be described as the “moderate right,” to put it it mildly.

For instance, during the election campaign, Kahlon stated, “If there is ever a bold leader who is really willing to put an end to the conflict, an end to the claims, a united Jerusalem and an end to the demands of the refugees, the Kulanu party will be there to support such an agreement.” As for the evacuation of settlements as part of some future agreement, the new finance minister said, “As soon as there is an arrangement and we see that there is a bold leader, it will be possible to talk about an agreement that will strengthen the State of Israel.”

Gen. (Ret.) Yoav Galant, Kulanu’s candidate for the role of housing minister, said in February, “It was through Zionist activity that we created the Palestinian people living beside us, and they are not going anywhere. … It makes no sense for us to settle in places with a dense Palestinian population. … We must grant the Palestinians territorial contiguity, which will allow them to run their own lives in an independent entity.”

The Kulanu platform says, “Israel must act politically and diplomatically to preserve its character as Jewish and democratic.” The party waves as an example a letter sent by former US President George W. Bush to the late Prime Minister Ariel Sharon. The main message of that letter was the need to establish a Palestinian state in most of the territory of the West Bank and East Jerusalem, apart from those areas with a dense Jewish population. Bush went on to emphasize that the annexation of the settlement blocs must have Palestinian consent.

The ultra-Orthodox, who are fighting the compulsory enlistment of their sons in the IDF, are not eager to do battle with the Palestinians and the Americans on behalf of young right-wing activists living in West Bank outposts. Right before the elections, Shas Chairman Aryeh Deri said, “I do not agree to the partition of Jerusalem, and I do not agree to mass evacuations for no reason, but I do support the evacuation of isolated settlements, and I do support negotiations.”

At a Geneva Initiative event in March, Adina Bar Shalom, the daughter of the late Shas leader Rabbi Ovadia Yosef, declared, “If the next government is involved in some diplomatic process, Shas, Aryeh Deri and the MKs (Knesset members) will push for it with all their might.” Bar Shalom is, in fact, considered close to Deri. At a special Congress conference in Washington, Knesset member Yitzhak Vaknin of Shas said, “The platform for an agreement is the Geneva Initiative. Any attempt to flee from this platform will only distance us from attaining peace.” Knesset member David Azulai, also from Shas, expressed similar support for an initiative based on the 1967 borders with mutual territorial swaps, noting, “The Geneva Initiative is a blessed initiative.”

Similarly, comments made by Knesset member Moshe Gafni, a leader of the Yahadut HaTorah faction, could serve as headlines for the guiding principles of a Herzog-Gal-On government. “I am for making progress in the diplomatic process, rather than leaving the situation the way it is, with nothing,” said the veteran ultra-Orthodox politician. “We must make effort, cautiously and slowly, together with the United States, so as not to leave the situation as is, in which we are completely isolated.”

And what about the most recent refugee from the new government, who just immigrated to the opposition? Can Liberman also be included in the non-right camp? While it is true that the dark side of the Yisrael Beitenu platform still includes the illegal and immoral idea of territorial exchanges that include significant Arab populations, over the past year, Liberman both spoke out and acted behind the scenes on behalf of a regional arrangement that would include the creation of a Palestinian state. “We must reach an arrangement in which there is a Jewish state and a Palestinian state,” Liberman declared. In a conversation he had last year with US Secretary of State John Kerry, the outgoing foreign minister said that there is a basis on which to create ''a new political structure in the Middle East.” In November he wrote, “In the end, in the argument over the integrity of the land versus the integrity of the people, the integrity of the people wins.”

It is not at all certain that if some Arab leader takes a bold step like the late Egyptian President Anwar Sadat did, and if an American president acts like Jimmy Carter, we will necessarily see the birth of an Israeli prime minister who follows in the footsteps of the late Prime Minister Menachem Begin. If, however, that does happen, the 20th Knesset will stand behind him.