With right-wing politicians calling Arab Israelis a fifth column, and a Joint List candidate comparing Zionism to the Islamic State, it seems that the common denominator in the Israeli elections is hatred of the other. 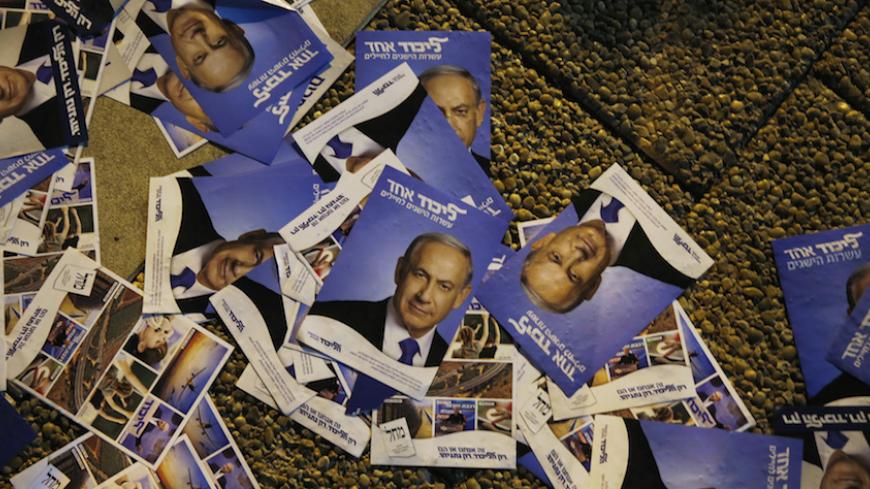 Members of the Israeli and Palestinian “peace camp” need not bother holding their breath until every vote is counted. Even if the Zionist Camp comes out ahead, and even if Likud alumni Moshe Kahlon joins a coalition alongside Zehava Gal-On of the Meretz Party, a photo of Zionist Camp leader Isaac Herzog and Palestinian President Mahmoud Abbas signing an agreement to end the Israeli-Palestinian conflict is far from becoming reality. It is as realistic as a photo of Foreign Minister Avigdor Liberman cavorting with Palestinian Arab Knesset member Haneen Zoabi.

Past experience has shown that such a government of disparate parts, or a unity government between the Likud and the Zionist Camp, has about as much chance of dismantling the Jewish settlement in Hebron, evacuating 120,000 settlers and giving up the Arab neighborhoods of Jerusalem, as Abbas has of declaring to the Palestinian parliament that Israel has always been the state of the Jewish people and only the Jewish people. As I wrote here last month, such governments are a surefire recipe for diplomatic paralysis.

Many Israelis, if not most, will not vote for a party on March 17 that they truly believe will bring peace, eliminate Hamas, prevent additional missile attacks on Beersheba or stop the Iranian nuclear program. Polls indicate that the cost of living and personal welfare are at the top of the agenda for most Israelis.

The young couples who protested en masse in the summer of 2011 are fed up with empty promises to bring down housing costs. Thus, the 2015 elections will go down in Israel's short but government-rich history (the average life span of an Israeli government is two years — 33 governments in 66 years) as elections focused on the question: Who don’t you want in power? Subsequently, the leading campaign slogans were “Anyone but Bibi,” referring to Prime Minister Benjamin Netanyahu, and “It’s us or them.”

Some will vote against the candidate who disappointed them, who angered US President Barack Obama or just the candidate whom they've had enough of. Others will be voting against those who will hand over territory to the Arabs, try to flatter Obama or those whom they simply don’t like. The two dozen seats that will probably fall into the hands of Yesh Atid leader Yair Lapid and Kulanu Party leader Moshe Kahlon — two one-man parties — will come largely from voters who are having a hard time deciding who they don’t want in power, Bibi or Buji (Isaac Herzog). Many of the Joint List voters — including nationalists, communists and Islamists — will vote for a party untarnished by Zionism.

The broadest common denominator in these elections can be summed up in four words: hatred of the other.

Netanyahu attracted hatred honestly, or rather, through his lack of integrity. He violated his commitment to promote the two-state solution, crossed the line with the Obama administration, turned his back on the disadvantaged and wasted public funds on luxuries. Worst of all, Bibi dragged Israel last summer into a needless and failed war with Hamas that claimed the lives of 72 Israelis and paralyzed the country for weeks.

But the right has had a leader who inflicted just as much damage on the country, if not more. Nonetheless, he became the darling of many Israelis, including a significant portion of the left.

Ariel Sharon, Netanyahu’s predecessor at the helm of the Likud, was directly responsible for the 1982 Lebanon war, which took the lives of 1,206 Israeli soldiers. Sharon was also an indirect partner in the Sabra and Shatila massacre. He promoted the settlement enterprise and damaged ties with the United States. Although he spent his whole life in public service, Sharon somehow managed to buy a farm on land worth millions of shekels.

Even Zionist Camp co-leader Tzipi Livni — an ardent supporter of the 2005 Gaza disengagement plan — has told me that Sharon's unilateral decision to carry out the disengagement, rather than handing Gaza over to Abbas in the framework of a diplomatic process, should be qualified as "throwing Gaza's keys into the street." She said that the decision left Hamas with the easy choice of "simply picking up those keys."

The disengagement allowed Sharon to avoid implementing George W. Bush's 2003 road map for Middle East peace, designed to freeze settlement construction and save the Oslo Accord.

During the current election campaign, the Zionist Camp has been portrayed as collaborating with the "Arab enemy."

On the opposite side, the left-wing camp de-legitimized Netanyahu in a manner reminiscent of the de-legitimization 20 years ago of the late Prime Minister Yitzhak Rabin and the other “Oslo criminals” by then-Likud Chairman Sharon, following the signing of the Oslo Accord. In the framework of the personal campaign against Netanyahu, giant billboards have gone up proclaiming that “Bibi and [HaBayit HaYehudi Chair Naftali] Bennett will stick us with the Palestinians forever.”

The cross-camp yearning to oust Netanyahu has gone as far as turning a human collective (many of Israel’s Arab citizens define themselves as “Palestinian Israeli citizens”) into a national nuisance. When Bennett compared the Palestinian problem to a piece of shrapnel stuck in his behind a few years ago, the loud protests of the left were heard throughout the country.

This time, it seems, anything goes. Liberman has called Ayman Odeh, the leader of the Joint List — a unified slate of predominantly Arab parties — as “a fifth column.” Join List spokesman Raja Za'atra has compared the Zionist movement to an organization that boasts of its beheadings. Aryeh Deri and Eli Yishai, the heads of two ultra-Orthodox parties, Shas and Yahad, are playing with the image of Shas' deceased spiritual leader, Rabbi Ovadia Yosef, almost as if he were a ball of rags. Celebrated writer Yair Garbuz lumps together rapists and thieves and a large public of honest people who believe in the power of religious charms.

Central media outlets were also influenced by the general atmosphere of this election campaign. Instead of providing a fair and accurate description of reality to assist the public in making an educated choice at the ballot box, the leading dailies Yedioth Ahronoth and Israel Hayom were busy throwing political mud in different directions. Israel Hayom continuously attacked Yedioth Ahronoth and its editor Noni Mozes. On the opposite side, Yedioth's senior political analyst Nahum Barnea stooped rather low, claiming that the premier is paranoid and "needs to be hospitalized."

The cliche about elections being a “celebration of democracy” — a previous election jingle — has disappeared. The election campaign will end tonight, but like the piles of trash left in the parks and nature reserves on the day following Independence Day celebrations, it will leave behind a thick layer of garbage talk. If we are unable to eliminate it, we will all drown in it — left and right, Jews and Arabs, religious and secular.