In an interview with Al-Monitor, former Deputy Defense Minister Danny Danon argues that Prime Minister Benjamin Netanyahu's speech succeeded in shifting the international community's focus back to the essential debate on the imminent agreement with Iran. 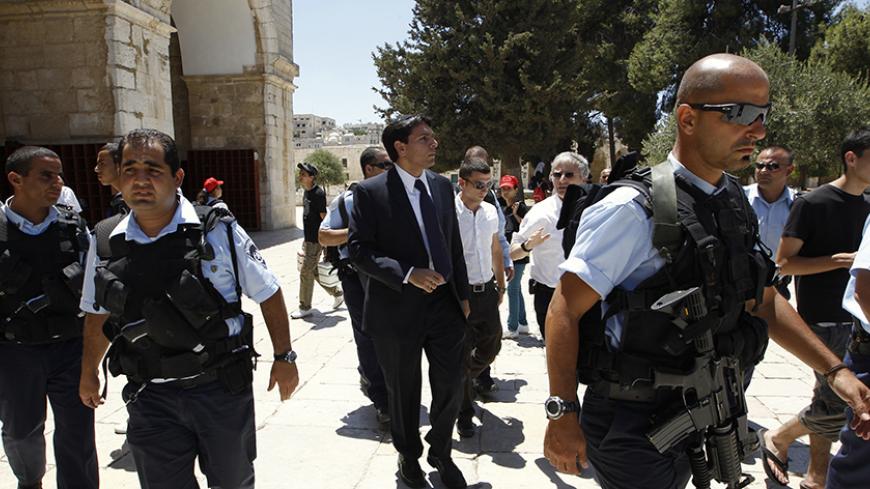 Israeli lawmaker Danny Danon (C), a deputy parliament speaker, is surrounded by police officers as he walks on the compound known to Muslims as Haram al-Sharif and to Jews as the Temple Mount, in Jerusalem's Old City, July 20, 2010. - REUTERS/Ammar Awad

“Prime Minister Benjamin Netanyahu’s speech to Congress succeeded in directing the argument about the nuclear deal [with Iran] to the one important question: Is it good or bad? And therein lies its great importance.” This statement was uttered by Danny Danon, Knesset member and chair of the Likud Central Committee. In this way, the former deputy defense minister expressed his view of the crisis in Israel-US relations, following Netanyahu’s visit to Washington on March 3.

Danon is not one of Netanyahu’s close associates in the Likud, to put it mildly. The prime minister discharged him from his position as deputy defense minister at the beginning of the Protective Edge campaign in July 2014, after Danon hurled harsh criticisms against the government’s policy vis-a-vis Hamas. He also opposed Netanyahu several times in the Likud Central Committee on inner political issues of the party.

However, last week, Danon backed up Netanyahu in the international public relations effort surrounding the prime minister’s oration in Capitol Hill. To Danon it was clear that the Likud chairman did the right thing as prime minister of Israel when he did not yield to pressures from the United States or Israel — by political adversaries and high-level commentators — and insisted on delivering his speech to Congress.

Al-Monitor:  The main argument against Netanyahu is that the speech will not stop Iranian nuclearization, and therefore should have found other modes of action.

Danon:  I do not agree with that at all. In my opinion, today it is already clear that the decision to deliver the speech was the correct decision. Prior to the speech, the argument revolved around the question of whether Netanyahu should or shouldn’t go to Congress and whether that was a respectable thing to do, and how much it would adversely affect relations with the US. Since the speech, the debate and discussion moved to the substantive issue of what should be done with Iran. Now the question is whether it is a good agreement or bad one. In my opinion, that's where the speech succeeded. Netanyahu managed to get this message across and kick the ball into the right court.

Even more, from a historical perspective, this speech will be remembered as having tremendous importance in the fight to stop the Iranian bomb. Regarding those who say that Netanyahu did what he did for political reasons, I am not at all sure that the speech has the magic political powers that people attribute to it, as if it will cause a windfall of mandates to sweep the Likud. It’s not there. Therefore, those who thought that it would bring a knock-out victory to the Likud, erred.

Al-Monitor:  But why didn’t Netanyahu wait until after the March 17 elections? Two weeks wouldn’t have made such a difference.

Danon:  It was important on the substantive level since we are in the very midst of the struggle against Iran and it was not possible to wait until after the elections. The prime minister wouldn’t have wanted to travel abroad while a government is being assembled, when the political picture was still unclear. Then Passover would be around the corner, then Independence Day, then it would be May and precious time would be lost.

There is a lot of hypocrisy and boorishness in the attacks against Netanyahu, some of which of course emanate from his political rivals. I would have expected of [Zionist Camp leader Isaac] Herzog to put his political differences of opinion aside and back up the prime minister on his statesman-like mission. After all, [the opposition] also knows that we are talking about a bad agreement that will bring Iran to become a nuclear threshold state.

Moreover, I am also sure that if leaders of Egypt and of the moderate Arab states such as Saudi Arabia would have come to speak to Congress, they would have said exactly the same things Netanyahu said. They would have warned against a bad agreement with a nuclear Iran. They understand how destructive it would be for the entire region.

We are in agreement with many other countries on this issue, i.e., the concern over Iran having a nuclear bomb. That is a well-known fact: Documents that were leaked to WikiLeaks showed that the Saudi royal family talks to the Americans not about the Israeli-Palestinian conflict, but about the Iranian issue. That’s what concerns them.

Al-Monitor:  And what about our relations with the US? Some argue that Netanyahu behaved almost like a bull in a china shop. Couldn’t he find another way to get his point across?

Danon:  This was a conflict between two world views. While the Americans are working toward an agreement that will delay Iran from nuclear breakout by a few years, we say: never. The prime minister comes and explains to the world the significance of this, and why the State of Israel cannot resign itself to a nuclear Iran. Therefore this is not a personal face-off between Netanyahu and President Barack Obama, but a difficult dispute on the issue involving differences of approach.

I do not deny the fact that relations between the countries are presently tense, but in the long term the ties will remain steadfast. Time will pass and no one will remember the vilifications and quarrels, but they will remember the speech, the prime minister’s warnings and most of all they will remember the agreement, whether or not it will be signed at the end. That is the essence. All the rest is background noise that will disappear. The criterion of the result is what will determine if Iran will be nuclear or not.

Netanyahu did something important, because if not for the speech, the subject would not have risen to the top of the agenda. I want to remind you that in 2009 Iran surprised the world when it emerged that it had succeeded in hiding an underground nuclear facility. I ask: Why should we assume that they won’t repeat that? After all, the international community will segue to another crisis very quickly, and they [Iranians] will exploit the opportunity to continue to develop the bomb.

Al-Monitor:  Still, it does seem that the prime minister left scorched earth behind him, in the wake of his recent visit. Jewish organizations in the US were also placed in an embarrassing position.

Danon:  Of course, American Jewry do not like the arguments between the Israeli government and the White House because it places them in an uncomfortable position. In spite of that, most of American Jewry believe that Israel and the US continue to cooperate, and they also believe that we’ll overcome this. It’s not the first time and won’t be the last time that there are disputes. Our history has been full of disagreements between us and the Americans. Let us recall how [Israel's first Prime Minister] David Ben-Gurion declared the establishment of the State of Israel in 1948, against American opposition, and Israel’s pre-emptive attack in [the Six-Day War] 1967 against the Arab countries despite American warnings. And of course the 1981 attack on the Iraqi nuclear reactor under [late Prime Minister] Menachem Begin’s command, which caused tremendous tension in the relationship. The bottom line is, we’ll get over this too.

Al-Monitor:  Former Mossad chief Meir Dagan has been recently arguing in media interviews, as well in his speech at the change-the-government rally on March 7, that Netanyahu inflicted strategic damage on the struggle against the Iranian nuclear program. This is a severe and disturbing accusation.

Danon:  I ask myself if, when he [Dagan] held his position [as Mossad head], did he also think this way? If so, why didn’t he say anything at the time? Why didn’t he just put the keys on the table and say goodbye? After all, he used to sit with the prime minister very often, on a weekly basis, and suddenly now he reveals these things? In my opinion, some kind of personal baggage just erupted now on a sensitive point.

I see the hatred by Dagan. It is very obvious that he is filled with personal hatred. Dagan did important things for Israeli security, but unfortunately, his skirmish with Netanyahu is of a personal nature. As far as he is concerned, anything the prime minister does is bad. Therefore, as far as I am concerned, his statements on this have lost their credibility. He became the key player of the left in the rally and on the election broadcasts.

Al-Monitor:  Recently, documents have been publicized that prove Netanyahu was prepared to make far-reaching concessions as part of the negotiations with the Palestinians. As someone who is viewed as a Likud hawk in the diplomatic realm, aren’t you concerned that Netanyahu will lead the country to partition the land?

Danon:  These kinds of documents that are suddenly released a few days before the elections — they are clearly part of a planned campaign that is trying to create conflict within the right-wing camp and siphon off votes from the Likud to small parties on the right. But I think that the public is smarter than that and will be able to read between the lines.

There are lots of documents like this from recent years, papers from the [President Bill] Clinton era also talked about the same points, but from our side, these are not acceptable. The prime minister said this clearly, and also in the Likud, the party in which I have a high-level position — we never would support those stances regarding partitioning Jerusalem and returning to the 1967 lines. Therefore, in my opinion, what we see is a planned, orchestrated program that is part of a mobilized campaign to harm the Likud. The prime minister expressly said that he opposes that document.