Prime Minister Benjamin Netanyahu has maneuvered himself into a win-win position: If an Iranian agreement isn’t reached, he'll celebrate all the way to the ballot box; if not, he can say that at least he tried to avert the catastrophe. 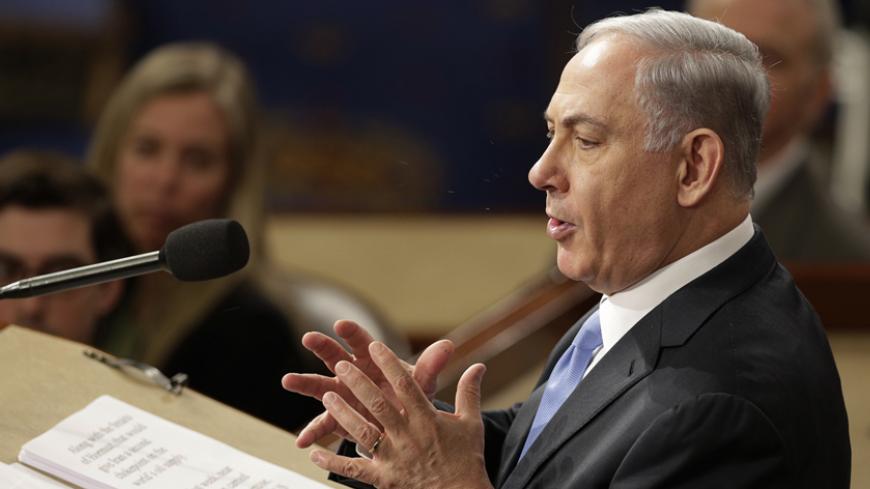 Israeli Prime Minister Benjamin Netanyahu addresses a joint meeting of the US Congress at the Capitol in Washington, March 3, 2015. - REUTERS/Joshua Roberts

All in all, Israeli Prime Minister Benjamin Netanyahu succeeded in landing on “enemy territory” and then making it home safe and sound. Yes, there was “collateral damage” here and there, mainly the painful words of Democratic House Minority Leader Nancy Pelosi, a devoted supporter of Israel. But the bottom line is that the commotion did not hurt him. Netanyahu surrounded himself with two Democratic assets, two famous Jews: Holocaust survivor and Nobel Peace Prize winner Elie Wiesel on one side and shrewd, top-level attorney Alan Dershowitz on the other. With this bullet-proof armor, he made his rounds in Congress, then made it home in one piece.

Netanyahu's speech to Congress will be recorded as one of the most fascinating political performances of the era. The entire operation, which closely resembled an especially convoluted chapter of the "House of Cards" television series, was somewhere between political genius and cynical deceptiveness and contained a wealth of elements from both sides.

Netanyahu, inspired by his Republican casino-king patron Sheldon Adelson, succeeded in transforming a furious American president, a hostile American administration and fateful international negotiations into political assets, two weeks before the Israeli elections. At this point, these may well be the only political cards that remain up his sleeve. Netanyahu cornered his main opponent, Zionist Camp leader Isaac Herzog, into a Catch-22: if Herzog attacked the speech, he would be perceived as disloyal to a momentous mission by the nation’s leader. If he embraced the speech, he would make himself the call-girl of his hated rival only a few days before elections.

Netanyahu smiled broadly the night of March 3. In the coming days, we will see how broad this smile will really get — whether the effect of the speech on Israeli polls will be exceptional and can reverse their current momentum. In recent weeks, Netanyahu has been hemorrhaging seats; he lost control over the media’s agenda, absorbed harsh criticism on all sides and began to lag after Herzog with a gap of two or three seats. The objective of the congressional speech was to reverse this trend and improve Netanyahu’s chances of political survival.

By the way, the Israeli assessment is that if Netanyahu is not given the mandate to assemble a government after the elections, he will consider resigning from political life. Back-stabbers both inside and out the Likud are yearning for that moment.

Immediately after the speech, I spoke to an Israeli security official who had been very close to the nuclear negotiations and decision-making hubs on the highest levels. On condition of anonymity, this person said, “The prime minister is a seasoned politician. He reads intelligence reports, he is well-connected and he knows that the chances of an agreement being signed between Iran and the world powers in the current round of talks is very low, if not zero. He knows that out of the eight controversial issues, only two are anywhere near agreement. There is still great distance between the sides on the other six issues. He knows that the French won’t agree to sign under such circumstances, and apparently the Americans as well. What he’s done here with the speech is political genius. He timed it perfectly so that in another week, when the deadline is postponed yet again, he can say that it was his speech that halted the agreement between Iran and the world powers. In reality, this has no basis in fact, but the Israeli electorate will buy into this maneuver and Netanyahu could thus win the elections. We are talking about a cynical maneuver that sacrifices strategic relations with a US president for the medium and long term in favor of narrow, short-term political interests.”

Many other players in Israel’s political system share this theory. Netanyahu expertly maneuvered himself into a win-win position. If in another week or 10 days the negotiations deadline is postponed, Netanyahu will celebrate all the way to the ballot box. And if an agreement is indeed reached, he can say that at least he tried to avert the catastrophe.

There’s something else here: Those in Netanyahu’s environs really hoped that the American administration would “punish” Bibi with all the verbal means at its disposal in the course of his stay in the United States. The big hope was that the president would criticize Netanyahu in his own voice or express his reservations. When Obama gave an interview to Reuters on March 2, and after the speech addressed the damage it caused, one could almost hear the cheers from Netanyahu’s bureau. Obama has become a real strategic asset for the premier.

From Netanyahu’s vantage, when he appears on one side of the screen and Obama on the other during prime time, that is a true victory photo. Yes, Israel has a sizable electorate that still thinks that good relations with the White House are more important than all kinds of political considerations, but this electorate is to be found in the political left and center. And at the moment, Netanyahu is fighting for votes from the right. He is fighting for his base against Economy and Trade Minister Naftali Bennett, Foreign Minister Avigdor Liberman and maybe even Yesh Atid leader Yair Lapid. Netanyahu knows that if Herzog finishes with three or four more seats than him, President Reuven Rivlin will ask Herzog to form the next government. Therefore, he prefers to cannibalize the right in favor of his survival as head of the Likud.

When he left for the United States, Netanyahu tried to deflect the attacks on him with an interesting argument. I am not the only one, Netanyahu said, who did important things for the people of Israel in express opposition to the American position; three other great Israeli leaders did the same. The first was David Ben-Gurion, Israel’s first prime minister, who declared the establishment of the State of Israel in 1948 against the judgment of the American administration. The second was Prime Minister Levi Eshkol, who embarked on the Six-Day War in 1967 to break the siege around Israel, also against American wishes. The third was Menachem Begin, who attacked the nuclear reactor in Iraq in 1981, contrary to the ideas of the Americans and the rest of the world.

The problem with Netanyahu’s equation is simple: All the other instances involved actions. In Netanyahu’s case, the choice was limited to talk, to mere words. The only thing that Netanyahu has done in the last six years was to make speeches, convene endless discussions, to threaten, warn and protest. With regard to action, his record yields a zero. Netanyahu built a terribly expensive (if creative) military option for attacking the Iranian nuclear infrastructure, but was afraid to use it.

In 2010 and 2011, several security/military chiefs opposed a strike in Iran. These included Yuval Diskin (Shin Bet), Meir Dagan (Mossad), Gabi Ashkenazi (Israel Defense Forces) and Amos Yadlin (military intelligence). Netanyahu was not able to get himself together and impose his authority on them. These four left in 2011 and were replaced by fresh-faced newbies lacking charisma and self-confidence. However, Netanyahu’s defense minister was still Ehud Barak. So why didn’t he attack Iran in 2012? Obama was facing re-election at the time and as far as he was concerned, Netanyahu could have allegedly (so to say) attacked the administration’s infrastructure in Washington. An American president does not confront Israel in election season, period. But Netanyahu was reluctant. He feared a national commission of inquiry on the heels of an operational catastrophe. He was more worried about himself than the fate of the State of Israel. What does he have left? To deliver speeches. And by the way, he is excellent at that.