Since the US invasion of Iraq in 2003, the national reconciliation project has been subject to several interpretations, as the separation between the innocent and “those who have Iraqi blood on their hands” is still ambiguous. 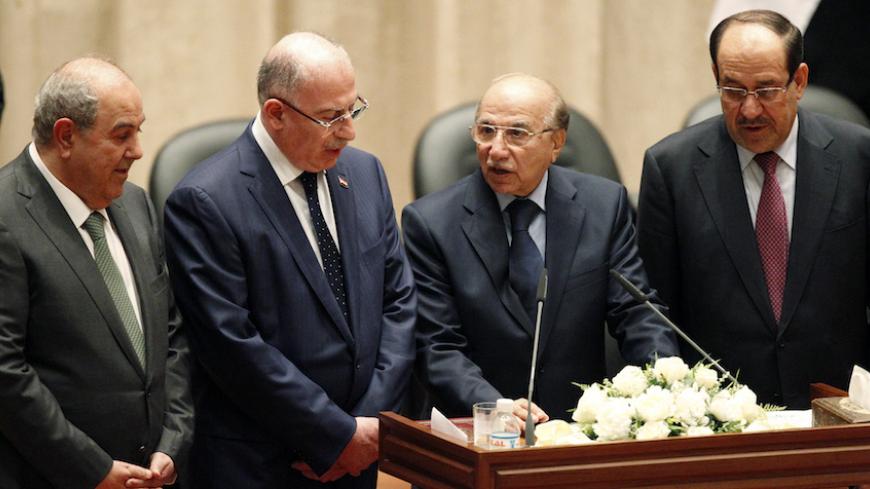 The latest statement on the “national reconciliation” in Iraq was made by Vice President Iyad Allawi on March 2, 2015, in which he noted, “A true reconciliation should include all parties except for the ones who have Iraqi blood on their hands.”

This expression has been repeated several times by Allawi himself, as well as different political, intellectual, tribal and religious leaders since 2003. It has been repeatedly associated with ambiguity concerning who should and should not be included in the reconciliation. Strangely enough, despite holding hundreds of meetings and conferences on the issue, no party has been able since 2003 to form a clear legal basis to determine who has Iraqi blood on their hands and who is innocent.

The concept of national reconciliation was proposed by Iraqi politicians in the first months of the US occupation of Iraq in 2003. Back then, it concerned specific parties such as the former Baathists, the former Iraqi army officers and the security apparatus members of the former Saddam Hussein regime. This concept sought to resolve the repercussions of the decision made by US civil administrator Paul Bremer to disband the Iraqi army — which some say partially led to security instability — the security apparatus and other institutions.

Reaching reconciliation at that early stage was possible. It could have been based on separating the pillars of the Saddam regime from the security and military institutions, and on reintegrating former Baathists into society.

However, since no Iraqi party took the initiative to implement the mechanisms of reconciliation at that early stage, and since the US troops did not adopt effective programs for the national reconciliation, a more complex political environment was created. In parallel, armed Sunni and Shiite groups emerged. They raised the banner of resisting the US occupation and attracted many former soldiers and security officers. Simultaneously, al-Qaeda, as well as several Salafist jihadist groups, were expanding in Iraq.

At the same time there was general talk about a national reconciliation, but this time it included the armed groups that participated in the civil war and fought the US troops.

The first attempt to determine the parties concerned with the national reconciliation and its mechanisms was sponsored by the Arab League. The latter held a conference in Cairo in November 2005, which was attended by representatives from all political Iraqi parties, including the armed groups.

The conference discussed the distinction between insurgents who took up arms against US troops to “resist the occupation” and those who have Iraqi blood on their hands.

However, the conference failed to produce honest, realistic and legal answers, and only launched slogans of national reconciliation. A few months later, the situation in Iraq began to go downhill. With the attack on Samarra’s Askariya shrine in February 2006, the civil war broke out, in which all Sunni and Shiite armed forces — such as the Islamic Army in Iraq, the 1920 Revolution Brigade and Jaysh al-Mahdi — participated. Talk about the parties involved in the national reconciliation became more ambiguous and the expression “who has Iraqi blood on their hands” included the ones involved in the civil war in addition to the Baathists and former army members.

In October 2006, a second attempt to achieve reconciliation was made; a conference for Sunni and Shiite clerics was held in the holy city of Mecca. It was concluded by the signing of what was known as the “Mecca Document,” which prohibited bloodshed and called for taking initiatives for social reconciliation. However, no one, not even those who signed it, abided by the document.

Since internal and regional efforts failed to ensure reconciliation on the basis of “transitional justice,” the United States established al-Sahwa (the Awakening) forces in 2006, which fought al-Qaeda. Many fighters who joined the groups defected from al-Qaeda and from armed Sunni groups that fought the US troops during their invasion of Iraq.

The US vision to form al-Sahwa forces could have been invested in a reconciliation project based on this fact, as those targeted by the reconciliation stood against al-Qaeda in Iraq. However, this did not happen and the al-Sahwa mission was later derailed in different ways: through wide arrest campaigns and the state’s withholding of fighters’ salaries. The repeated and pointless questions by the political and intellectual elites regarding the failure of the reconciliation resurfaced, while former Iraqi Prime Minister Nouri al-Maliki continued to reiterate throughout his years in office (2006-2014) that the national reconciliation had achieved its objectives — mainly achieving civil peace, which did not happen in Iraq.

Reconciliation was not reached even after the Sunni demonstrations against Maliki’s government around the end of 2012.

After the Islamic State (IS) took over vast lands in Iraq, occupying several cities on June 9, 2014, the concept of national reconciliation became more complex than ever. It is no longer limited to procedures and government resolutions to resolve the issues of the former army, the disbanded institutions and the ambiguous laws. All these measures will not result in solutions for the post-IS elimination stage and after the Iraqi government is able to regain the regions it had lost.

Any national reconciliation project proposed today should deal with the actual circumstances of 2015, not only with the situation in 2003 or 2006.

The political and government parties in Iraq are asked to give clear answers to how they are going to handle what IS leaves behind. There are hundreds of thousands of people who were ruled by the group over the past months and tens of thousands of people who joined the military or civil institutions with which IS conducted the affairs of the areas it occupied. The separation between the ones who collaborated with IS and the innocents is a complicated process, especially since the Iraqi government did not develop such a process, and did not think of laws that could achieve justice in the post-IS stage.

On March 1, Iraqi parliament speaker Salim al-Jubouri said that the doors of reconciliation are open to everyone “except the ones who collaborated with IS.”

Iraqi political circles are asked today to find an accurate legal definition for the expression, “except the ones who collaborated with IS,” who should be legally held accountable. Political representatives should also find ways to integrate the innocent people into the reconciliation project. This definition is as necessary as defining the expression “except the ones who have Iraqi blood on their hands.”