In the week since the elections, Benjamin Netanyahu has been trying to erase what he did during the campaign, expressing worries about US backing of Israel and international reactions. 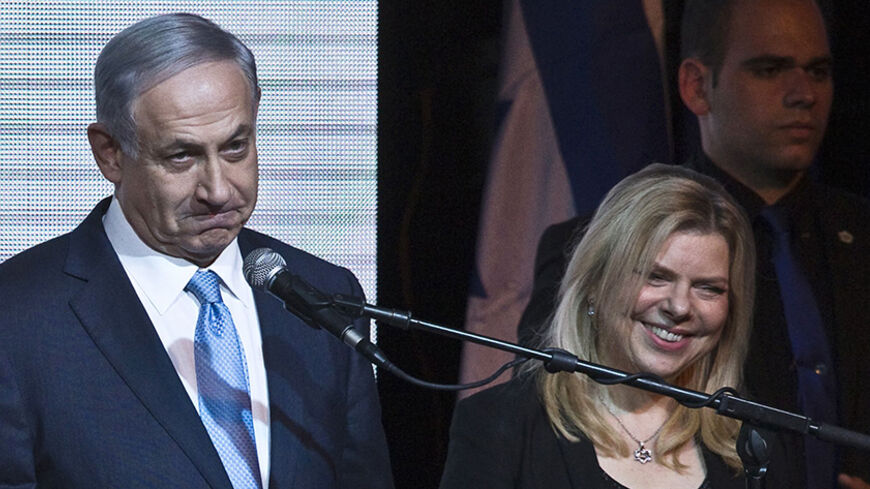 Benjamin Netanyahu stands next to his wife Sara as he delivers a speech to supporters at party headquarters in Tel Aviv, March 18, 2015. - REUTERS/Nir Elias

Israeli Prime Minister Benjamin Netanyahu is worried. Perhaps even scared. Till now, there were mainly veiled intimations, threats made in conversations behind closed doors, secret situation reports, commentaries in the newspapers. But now we see the Obama administration flogging Netanyahu on an almost daily basis.

US Ambassador to Israel Dan Shapiro confirms that the United States has not yet decided whether to cast a veto in the UN Security Council on Israel’s behalf the next time it will be asked to do so. US President Barack Obama himself castigates Netanyahu in an interview with Huffington Post. White House chief of staff Denis McDonough delivers a speech to the left-wing pro-Israel J Street lobby in which he sharply criticizes Netanyahu.

Netanyahu knows it’s payback time. And Netanyahu, who hates to pay, simply does not know where to get the money. His international credit line is blocked. On the personal level, he's also insolvent. He will have to reinvent himself. It's uncertain whether he is capable of it.

Netanyahu is groping to find his way and he examines options for reconciliation, even a partial one, with the White House. If reconciliation is out of the question, then at least to calm down the tensions. He talks on the phone with US legislators from the Democratic Party (those he still has relations with) and he sends messages. In recent days, he also met in Jerusalem with a senior American personality who is closely associated with the Democratic Party. “You have to heal this wound,” he said to Netanyahu, who agreed enthusiastically but had no idea how. Netanyahu expressed strong doubts about what to expect from Obama’s 22 remaining months in the White House.

Behind the scenes, Netanyahu has serious complaints about the Obama administration. Of course, the prime minister distances himself from these accusations that are voiced by a less-intimate associates' circle of his, but anyone with experience in the goings-on in Jerusalem corridors is familiar with the stories: that the US Embassy hired a full-time person to encourage the Arab factions to unite and to increase the voting percentages. The Americans did everything they could to cause the Israeli Arabs to flock to the polling booths. The hope was that a high voting percentage in the Arab sector would garner more than 15 mandates to the Joint List, greatly assisting Zionist Camp leader Isaac Herzog’s efforts in creating an "obstructing bloc" in the Knesset to prevent Netanyahu from forming a government.

Then along came Netanyahu’s American pollster and Republican Party member John McLaughlin. In a radio interview granted by McLaughlin March 22, he dispelled the anonymity behind the accusations and flatly said that the Obama administration spent taxpayer money to help fund the V15 NGO that tried to bring down Netanyahu in the election. McLaughlin also claimed that at the beginning of the year, the US State Department dispensed visas to high-level people in the Israeli Arab parties. This was to enable them to travel to the United States to attend special seminars on how to raise the voting percentages.

Even before these strange accusations had time to evaporate, on March 24 The Wall Street Journal published a series of new accusations against Israel. The article said that Israeli intelligence branches were carrying out intensive espionage on the nuclear negotiations between the world powers and Iran. Experts in the field are not exactly fainting with surprise because Israel is clearly trying to disclose what is going on there, and invests great intelligence efforts in this mission. The question is whether it does so on American soil. Israel denies this charge vehemently, even angrily, including an interview with Foreign Minister Avigdor Liberman.

One way or the other, Netanyahu is aware of his standing in the international community in general, and the White House in particular, and is trying to figure a way out of this. In the week since the March 17 elections, he's trying to wipe out the harm he did in the course of the campaign. As recalled, the day after the elections Netanyahu convened American TV channels and announced that his words against his Bar Ilan speech commitment had been taken out of context, yet he did not retract his declarations in which he stated that a Palestinian state would not be established on his watch. The Americans didn’t buy it. “Words matter,” White House press secretary Josh Earnest said when asked which of Netanyahu's statements to believe, while Obama himself declared that he does believe the statements Netanyahu made during the campaign.

On March 23, Netanyahu convened heads of local and regional Arab councils identified with the Likud. The attendees were mainly Druze, Bedouins and Circassians (only one Palestinian Arab), but it didn’t matter: Netanyahu read from a written statement a sort of weak apology to the Arab minority in Israel, on what he said on election day (that droves of Arabs are rushing to the voting booths and endangering the Likud regime). Netanyahu understood that he had crossed the line. His words reverberated from Washington to Brussels and all the way to the other European capitals, and was categorized as a form of racism against 20% of Israel’s population. So he did it; he apologized.

Netanyahu brings to mind the character of the “bad boy,” from the famous children’s poem by Israeli poet Leah Goldberg. “It’s not me,” the child says every time he’s caught, “It’s the bad boy inside me.” That is what Netanyahu is trying to explain now to his worried parents, Father Obama and Mother Europe: Don’t pay attention. Don’t take me too seriously. When I’m in a campaign, that’s not me, it’s the bad boy inside me, the child who tries to perpetuate his right-wing government and win the elections at any price. Please erase everything I said during the electoral campaign; it was just a joke.

But the worried parents are no longer willing to erase Netanyahu’s pranks. He himself, in private talks, admits to being concerned by a US refusal to cast a veto at the UN Security Council, of intensification of the denunciations campaign against Israel, of boycotts and sanctions mainly from Europe. He is also concerned lest high-level Israeli army officers be dragged to the International Criminal Court in the Hague, followed (perhaps) by the politicians, including himself.

If Netanyahu does indeed assemble the right-wing/ultra-Orthodox government as expected in the next few weeks, the next two years may well be hellish for him. That is the reason why the option of enlarging the government by attaching Zionist Camp head Herzog or Yesh Atid Party leader Yair Lapid is firm and abiding.

Meanwhile, this possibility is denied angrily by Herzog and his associates, especially Shelly Yachimovich, the Iron Lady of the Labor Party (now, the Zionist Camp). Lapid also announced that he is headed for the opposition, and went on a vacation with his wife to Paris. Netanyahu looks around him and sees Yisrael Beitenu Chairman Liberman and Yesh Atid head Naftali Bennett fighting over the defense portfolio; the ultra-Orthodox who expect giant budgets; the settlers who are preparing a wave of ultranationalistic bills; and the radical right that supports annexation of the territories and strengthening of the settlement enterprise. He's looking for a way out.

Netanyahu has shown he possesses unlimited capacity for political survival. Now we will see if he is also equipped with similar capabilities in the diplomatic and international arena.