For his supporters, Turkish President Recep Tayyip Erdogan is an unquestionable leader who, not being limited by reality, is able to create his own facts. 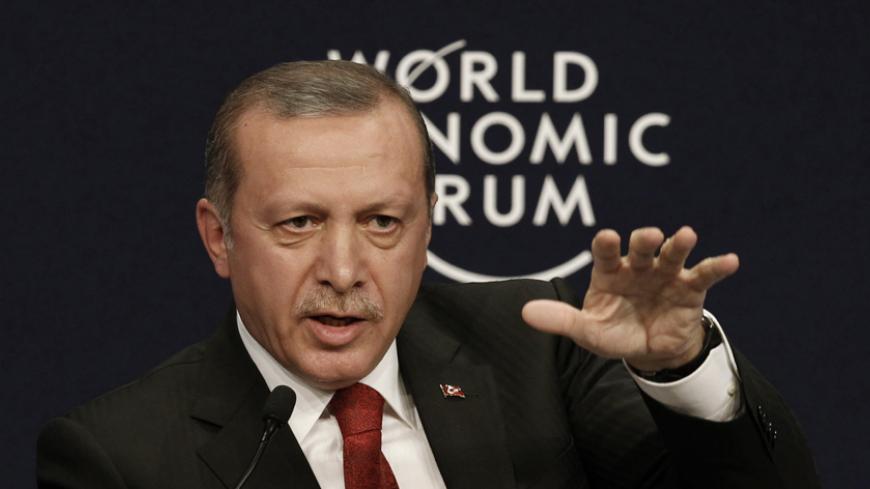 Turkish President Recep Tayyip Erdogan has been very persistent lately on two issues: that Turkey should have a “presidential system,” and that Turkey’s central bank should lower the interest rate of Turkish currency. As the elected leader of the nation, Erdogan may certainly advocate such opinions, but his attempts to redefine the very basic facts of politics and economics 101 are a bit over the top.

Let’s begin with the first issue: the presidential system. Erdogan and his top advisers began promoting this idea about two years ago, when it became apparent that Erdogan would continue his career as president after serving three terms as prime minister. The problem was that under Turkey's existing parliamentary system, the president is nonpartisan and largely symbolic, whereas the prime minister holds the real executive power. This has not stopped Erdogan from becoming “a different president,” as he said repeatedly during his electoral campaign last summer. He wants to turn his de facto dominance over the state — and various aspects of society as well, as I explained here — into a de jure reality. This means discarding Turkey’s 140-year-old parliamentary tradition in favor of a "presidential system," in which the elected president will face very few, if any, checks and balances.

This sounds troubling in itself, but there is something even more troubling: Erdogan’s denial of some of the very basic facts of political science just for the sake of propaganda. On Jan. 27, Erdogan told a group of journalists: “Almost all developed countries have this [presidential] system.” This is patently false, as “almost all developed countries,” in fact, are parliamentary democracies, either as republics or constitutional monarchies (for example, the United Kingdom, Sweden, Norway, Denmark, Finland, Germany, the Netherlands, Spain, Italy, Switzerland, Canada, Australia and many more).

In fact, what is rare among “developed countries” is the presidential system, of which the United States is arguably the only good example with a long history of liberal democracy. Many other “presidential systems” are found in the former or recent authoritarian regimes of Latin Africa, Africa and Central Asia.

The problem is, no one around Erdogan dared tell him that his argument was based on a misrepresentation of the facts. This is probably why he took it even further. On Jan. 30, he made another counterfactual statement. “In my opinion, Britain is a semi-presidency,” he said, “and the predominant constituent is the queen.” Both assertions were appallingly false, for Britain is the archetypal parliamentary democracy, and the queen’s powers are symbolic. But again, no one in Erdogan’s party (or media) dared to challenge him.

While these political discussions took place, Erdogan kept pushing for an unusual theory of macroeconomics as well, dictating that high interest rates lead to high inflation. (The established economic theory, as explained here, asserts the opposite: Interest rates and inflation are negatively, not positively, correlated.) But Erdogan insists on his personal theory, harshly criticizing the Central Bank of Turkey for not lowering the interest rates of the lira, despite his repeated calls to do so.

Yet, this time someone spoke out against Erdogan: Durmus Yilmaz, the former head of Turkey's central bank. Yilmaz was appointed to the position by Erdogan’s own Justice and Development Party (AKP) Cabinet in 2006 and led the institution quite successfully until 2011. It is notable that Yilmaz, during the time of the appointment, was criticized and even ridiculed by some secularists in the Turkish media for the simple fact that his wife wears a headscarf. After the end of his term in 2011, Yilmaz took a job as then-President Abdullah Gul's economy adviser.

In other words, no one could argue that Yilmaz is an ideological enemy on Erdogan. Yet, he opposed the president’s constant intimidation of the central bank on interest rates, saying: “There is a 350- or 400-year-old economic literature. If it is not true, then let’s burn the books of Adam Smith or John Maynard Keynes. And let’s change the law of the central bank and make the rates zero. If this works, then I will publicly apologize for my economic illiteracy and I will say 'I do not know this job.'”

Yilmaz’s emphasis on the centuries-old economic literature was notable, for it underlined the gap between the facts of economics and Erdogan's self-serving ideology.

I believe that in the broader scheme of things, these discussions point to a worrying transformation within Turkey’s ruling AKP. Until 2011, the AKP was widely deemed quite successful with regard to both politics and the economy. This success was mainly thanks to the party’s abandonment of its former Islamist ideology and its acceptance of pragmatic policies based on global norms. In foreign policy, the motto was “zero problems with neighbors.” In economics, it was integration with global markets.

Yet this very success tempted the AKP, prompting it to revert back to its Islamism and initiate a much more ambitious narrative of building a new regional order, and even a new global order. Meanwhile, Erdogan turned into an unquestionable leader who is not limited by facts and creates his own facts, as envisioned by his Islamist ideology and extraordinary intuition. In the eyes of his hard-core supporters, he is not a mere political leader who formulates pragmatic policies. He is a total leader who redefines everything — from family matters to economics, or even the very definition of democracy.

It is a safer bet for Turkey, however, to stick to the economic literature of Smith and Keynes, rather than adopt an economic version of Lysenkoism. The trouble is that, besides exceptionally brave figures like Yilmaz, few people are willing to speak out within the AKP universe, lest they risk being branded a soulless “Orientalist,” a spineless “traitor” or even a heinous “spy” who works for the mystical “interest-rate lobby” and other monstrous enemies of the all-glorious “New Turkey.”