Turkey's ruling AKP government has long made a habit of spending big money on social assistance to inspire loyalty and collect votes. 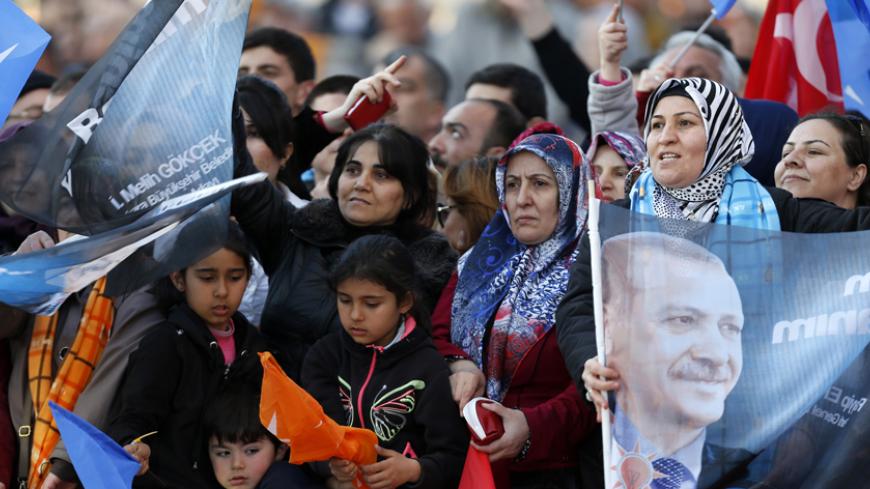 Supporters of Turkey's Prime Minister Recep Tayyip Erdogan wave his portraits and the flags of Turkey and his ruling party during a campaign rally in Ankara, March 22, 2014. - REUTERS/Umit Bektas

One of the major characteristics of Turkish politics is the official policy of distributing social assistance instead of investing strategically to reduce unemployment. Poor segments of society have become dependent upon cash and other assistance, and recipients of it inevitably vote for the ruling party. For the poor citizens, casting a vote once every four years in return for handouts is a good deal. Fear that the assistance will be terminated should another party come to power is a powerful inducement to vote for the Justice and Development Party (AKP).

Governments should take action to eliminate poverty, not make people survive on handouts. But for years, per capita national income has been nearly stagnant at $10,000, meaning poverty and dependence are here to stay. Social assistance is funded by the state treasury, which means spending the money collected from citizens as taxes. Naturally, the poor do not want to upset the established order.

The magic formula that keeps the government in power lies in these figures.

In 2002, a Democratic Left-Nationalist Action-Motherland Party coalition governed the country. The total social assistance distributed that year was only 1.376 billion lira ($560 million). After coming to power, the AKP saw an opening and made excellent use of it. It boosted social assistance drastically to “achieve EU averages” and reached to 30.4 billion lira ($12.4 billion) by 2014. This is twice the amount of direct capital coming into Turkey. In the period of January-November 2014, direct capital inputs to Turkey reached $6.8 billion.

While domestic and foreign investments decline and its native capital escapes abroad, Turkey continues to increase the funds it allots for social assistance. With such generosity, it is no wonder that the ruling party has retained power for 13 years.

With $12.4 billion annually, Turkey could have set up factories and other facilities that could have created jobs for hundreds of thousands of people. But the government eschews that approach, because there is no guarantee that those factories will also produce votes.

Some 3,096,000 families benefit from social assistance from the government in the form of cash, food, clothing, cleaning supplies and coal. Estimating four members per family, the total beneficiaries number roughly 13 million. The relatives of beneficiaries also feel sympathy for the government, enabling the AKP to start election races with a significant lead.

In addition, millions of people receive cash assistance from the Social Solidarity Foundations. Municipalities have their own assistance operations. The Metropolitan Municipality of Ankara extends food, clothing and heating assistance to 1 million residents. Then there are funds for cash assistance by provincial and district governors to people who declare hardships.

Municipalities controlled by the AKP regularly deliver assistance packages to millions of people. When this aid is added to the national social assistance, the number of families benefiting is much higher than 3 million, and the number of people benefiting exceeds 13 million.

Poverty is a reality of Turkey and with 29 million people known to be living under the poverty line, there are millions of people who need assistance.

In such a country, if you hand out 30 billion lira ($12.4 billion) a year, people see the assistance not as the generosity of the state but kind-hearted assistance by the AKP. Unless this perception changes, elections results won’t either.