Is Turkey's AKP cashing in on poverty?

Some accuse the AKP of running a “vote-for-aid” deal with the country’s neediest citizens, yet at the same time Turkish opposition parties have failed to convince the public they are committed to supporting the poor. 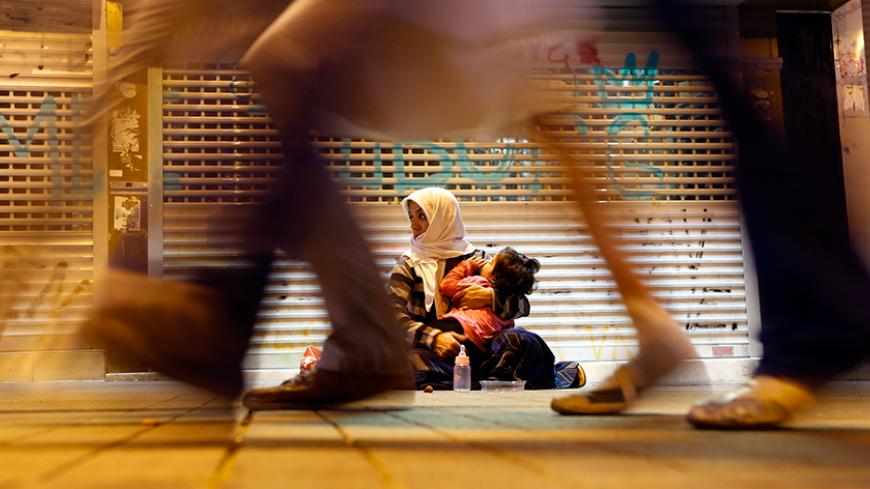 A woman holds a child as she begs for money near Taksim Square in Istanbul, June 19, 2013. - REUTERS/Marko Djurica

People in Turkey classified as “in need of assistance” number more than 30 million, out of a population of 79 million, according to government figures. While the per capita income is decreasing, the government keeps pressing citizens to have at least three children, showing little regard for the financial strains of families. And more babies born into already struggling households means more people seeking state assistance to raise their offspring.

Child support assistance, paid on a monthly basis, amounts to 582 Turkish lira ($206) per family. In 2015, the families of 101,561 needy children received financial aid from the government, up from 19,735 in 2005. The staggering 400% increase reflects only the official statistics, with no figures available for those supported by nongovernmental organizations. Yet, highly influential charities close to the ruling Justice and Development Party (AKP) are known to reach out to tens of thousands of poor families across Turkey.

The financial assistance bond between the AKP and the impoverished masses begins with the birth of children and continues into adulthood. The wide range of in-kind and financial benefits paid on a regular basis includes educational assistance, scholarships, food and clothing aid, coal for home heating, old-age assistance and so on. Up to 13 million people receive some kind of assistance from the state, including local administrations.

Under the three-way coalition government before the AKP, social benefits paid out to citizens totaled about 1.4 billion Turkish lira in 2002. The AKP, which came to power in November that year, saw a politically profitable gap in this realm and took action, handing out aid to millions, young and old alike. By 2014, funds allocated to social benefits shot up to 30.4 billion Turkish lira, while the AKP significantly boosted its popular support.

According to Umut Oran, the vice president of the Socialist International and member of the main opposition Republican People’s Party (CHP), the government — rather than working to boost the nation’s prosperity — has chosen to encourage people to have more children, which effectively makes poor families poorer and increases the number of those depending on state assistance.

Oran stressed that state assistance was portrayed as “party assistance” to the beneficiaries. “Membership in the AKP has become a prerequisite for easy access to assistance, though this assistance comes from the taxes the whole nation pays. Through the indirect taxes — which amount to 60% [of total tax revenues] — the state gives out what it takes from the citizens’ pockets to the beneficiaries,” he told Al-Monitor, adding that corruption had spilled over to this realm as well.

Oran said the CHP was not against the schemes of welfare assistance in principle, but stressed the benefits should be allocated fairly, without political considerations. Pointing to millions of people living below the poverty line, he said, “Social welfare assistance should be increased. It makes up 1.38% of the gross domestic product in Turkey, while the European Union average is 2.5%. The people must know that state assistance [for the needy] exists in all countries, and that it is assistance by the Turkish state and not the AKP. Hunting for votes via social benefits is unacceptable.”

And how does the social welfare assistance sway the beneficiaries? How does it play out at the ballot boxes?

Millions of beneficiaries of some type of regular monthly assistance — be it child support or food and clothing aid — sympathize with the ruling party and tend to perceive the potential change of government as a threat to the flow of assistance. The ruling party nourishes this perception.

As a result, people keen to sustain the “vote-for-aid” deal have continued to back the AKP. The opposition parties, meanwhile, have failed to convince the masses that they, too, are committed to supporting the poor and that social benefits are not a favor but a civic right, contributing to the AKP’s grip to power for almost 14 years now.

In the parliamentary elections in November 2015, the AKP bagged some 23.7 million of the 48.5 million votes, while the second party, the CHP, received 12.1 million votes. Thanks to the social benefits it distributes, the ruling party gets a head start in millions of votes. The CHP vote lags behind even the total number of aid beneficiaries. In a race like this, unseating the AKP from power seems a truly uphill task.