Civilians in Syria are paying the cost of the four-year conflict, often losing their lives, be it at the hands of the regime, opposition forces or jihadists. 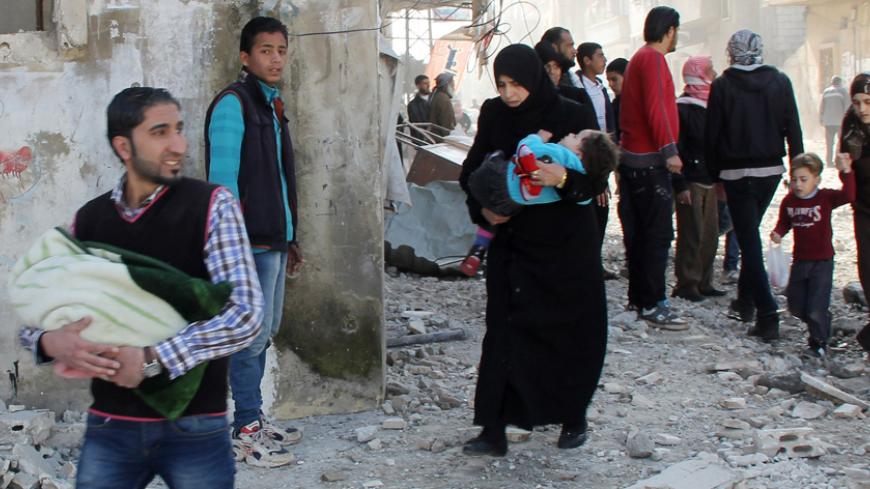 Civilians carry their children as they flee after two barrel bombs were reported to have been dropped by forces loyal to Syria's President Bashar al-Assad in the northwestern Homs district of Al Waer, Feb. 7, 2015. - REUTERS
Edward Dark
@@edwardedark
February 17, 2015

As the Syrian conflict enters its fifth year next month, an alarming uptick in violence targeting innocent civilians has once again been unleashed on this devastated nation. The loss of life is not only incidental or a mere side effect of war, but is in many cases a deliberate part of the military strategy of Syria’s major warring camps.

Since a lot of the fighting of Syria’s conflict takes place in heavily populated towns and urban areas, sniper kill zones often dissect neighborhoods and fighters dig in and embed among the civilian population. Effectively, this makes human shields of their inhabitants, and inevitably ensures they suffer disproportionately when those entrenched combatants start to fight and shell each other’s positions. This is made worse by the very nature of this type of urban warfare, which usually produces deadly stalemates, or only excruciatingly slow advances at terribly high cost. This callousness and indifference to the suffering of Syrians by those fighting in their name the Syrian regime and the rebel and jihadist groups opposing it has been a central and dominant theme throughout this messy and brutal war.

Another disturbing aspect in which civilians are caught up in the war is through the heavy indiscriminate bombing of their neighborhoods by the infamous “barrel bombs” dropped by regime helicopters from high altitude on rebel-held areas, the main purpose being to clear out the residents and make the areas easier to capture. Needless to say, the results of such bombing campaigns are catastrophic. This sometimes goes in tandem with crippling sieges that can last for months or even years, causing untold misery and suffering for the people trapped inside, who have to not only contend with a possible quick death from above but also a slow agonizing death from starvation and poverty.

Being in an area that one of the warring camps controls does not necessarily delineate support for that camp, although it is matter-of-factly portrayed as such by the propaganda machine of the other side, seeking to justify its excessive brutality. This divisive “us against them” is a rather peculiar aspect of this conflict, even if not surprising. A terrified populace can easily be polarized against their former friends and neighbors, especially when told that they are now the enemy, with corroboration of that coming in the form of deadly shells and bombs fired from their areas. We have experienced this first hand in Aleppo city, for instance, where rebels shell neighborhoods in the west (the regime-controlled part) on a daily basis, killing and wounding many people, with the justification being that anyone still living there must be “shabiha,” a derogatory term for a regime loyalist.

Thus, the warring camps in Syria seek to consolidate support among “our civilians” while demonizing “their civilians,” which makes mass slaughter of people more palatable and acceptable. In fact, in the tit-for-tat shelling of Damascus city and eastern Ghouta earlier this month, there were calls to wipe Douma out, and everyone in it, by people in Damascus, while those in Ghouta cheered with glee every time rockets were fired into the capital. Of course these sentiments are not universally shared or accepted, but illustrate how quickly desensitized and dehumanized people living through the horrors of war can become. The end result, though, was equally as grotesque as those attitudes, with many deaths and injuries in Damascus, and a disproportionate number of people killed in Ghouta, too, with the unsettling prospect of this mutual slaughter now becoming the new norm as both sides continue to threaten and escalate their rhetoric.

Of course, the absurdity of all this is that it serves absolutely no military purpose at all for either side. The only effect it had was to further terrorize an already traumatized population, entrench mutual hatred and perhaps satiate an unhealthy bloodlust and wanton desire for revenge.

Unfortunately, the callous justification for those war crimes, and the demonization and dehumanization that goes along with them — often on sectarian lines — are exacerbated, or at least not discouraged by the local media of the warring camps, as well as to an extent by some pan-Arab media stations.

Not that the regime or the rebels seem to care much about that aspect. To them, Syrians are expendable pawns in their bloody war games, cheered on by their respective outside backers who are more than happy to see their rivalry and scores settled in Syrian blood and the destruction of our nation. Of course, the only reason the warring parties in Syria continue to perpetrate their war crimes with such impunity is because they believe they can get away with it. There will be no consequences or accountability for their actions, despite all the fuss and consternation at the United Nations and other global diplomatic bodies.

For their part, the jihadists — the Islamic State (IS) as well as al-Qaeda affiliates such as Jabhat al-Nusra and Ahrar al-Sham that control vast swaths of northern and northeast Syria with up to 3 million people under their rule — use barbaric savagery against civilians to cement their power. They make sure to publicize as much as possible their executions, and usually carry out beheadings and crucifixions in public squares to large audiences, leaving the bodies on display sometimes for days. This serves as a gruesome reminder to anyone seeking to challenge their authority, and they have gone after activists hostile to them with the same zeal they use to persecute “heretics” and “apostates.”

They also use violence on an industrial scale when seeking to get rid of populations they know are unwieldy — usually religious or ethnic minorities, but sometimes also Sunni Muslim clans such as the Shiatat in Deir ez-Zor.

Each part of Syria has experienced the conflict in a different way, and has different attitudes toward it. Some areas like the coast have been unaffected directly by the war, and only experience it in their communities through the loss of large numbers of young men fighting with the regime. Other areas such as Ghouta, Homs or Aleppo city are in the eye of the storm and have gone through total devastation and are close to annihilation, whereas Idlib, Raqqa and Deir ez-Zor languish under the draconian rule of jihadists.

In some areas, regime forces have caused the most suffering and committed more war crimes. In other areas, the rebels are most to blame, and yet in others, the jihadists.

In that sense, the Syrian conflict resembles more a collection of localized wars than a coherent whole, and although Syrian society is extremely polarized and split along ethnic, sectarian and geographic lines, the single most prevalent theme that unites us all is the loss of innocent friends and family and a genuine desire to see that end.

You will see this echoed everywhere you go in Syria, regardless of which side that person supports or hates. We have come to the realization as a people — finally — that this bloodshed serves no purpose and has to stop by any means necessary. We have paid a heavy price and gained nothing but death and destruction in return. Unfortunately, the key to ending the war is not in our hands, nor is it our choice to make.