An exclusive report from Aleppo, which is facing the worst bombing of Syria's war. 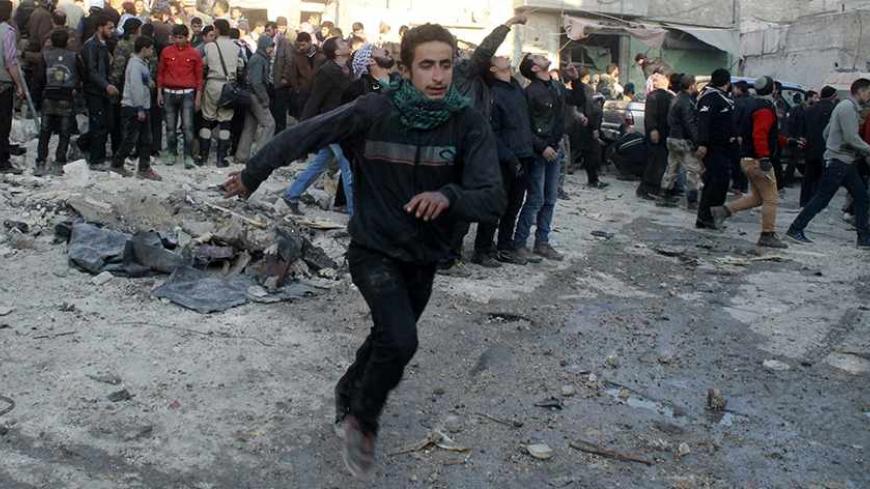 People flee after what activists said was the return of government jet planes in Aleppo's al-Marja district, Dec. 23, 2013. More than 350 people have been killed in a week of air raids on the northern Syrian city of Aleppo and nearby towns by President Bashar al-Assad's forces, a monitoring group said. - REUTERS/Saad AboBrahim
Edward Dark
@@edwardedark
December 26, 2013

ALEPPO, Syria — Aleppo has seen its bloodiest week since the Syrian conflict began more than 32 months ago. I’d even venture to say it's the bloodiest in its entire recent history, a grotesque carnival of mayhem, death and carnage, perpetrated against the hapless and helpless citizens of this long-suffering ancient city. A thousand waves of invaders and marauders this city must have seen as countless civilizations upon its land rose and fell, but this recent episode is of such ferocious barbarity and bloodletting that it surely must rank somewhere at the top of its list of all time historical traumas.

Hunkered down in a friend’s basement in the commercial district of Jamilieh today, I counted eight explosions, all nearby. A few frantic phone calls and a quick roundup on my social media accounts verified what we had been dreading for the past couple of days — the rebels’ promised ultimatum of “revenge” for the regime's barrel bombing of their areas in east Aleppo. One phrase I repeatedly heard neatly summed up the situation: “The bombs are falling like rain in Halab [Aleppo].” And like rain they fell, across an arc of neighborhoods that roughly followed the front lines.

Panicked people ran for cover or fled their homes, as more than 25 strikes killed at least five and maimed more than 40, all civilians of course, their numbers reflecting the customary macabre aftermath of any attack in a densely crowded city such as Aleppo. Streets usually busy were eerily deserted as dusk fell and the city descended into almost absolute darkness. Only the dreary sound of power generators hummed an incessant background tune to the irregular loud bangs of explosions and the whooshes and whistles of rockets and shells skirting the rooftops, as people hunkered down in their homes and dreaded what continued horrors the next day might bring.

The day’s carnage must be viewed against the absurdly horrendous events and unspeakable horrors of the preceding week. As helicopters flew their daily sorties over rebel areas of east Aleppo, they dropped fury and death from the sky, manifested in their deadly payload of half-ton TNT barrels filled with vicious metal shrapnel for maximum maiming effect. The resulting scenes of devastation, destruction and mayhem were beamed via news stations and social media to an uncaring world, which had quite frankly become bored and desensitized to Syrian suffering. Burned and charred vehicles, gutted and collapsed buildings as well as an abundance of severed body parts featured prominently in the macabre nightmare landscapes the scores of videos and pictures depicted.

As poorly equipped and chronically underprovisioned hospitals struggled to cope with the influx, the casualties mounted. In eight days of bombardment, an estimated 364 people were killed and scores more maimed and wounded. People dug, sometimes with their bare hands, to release those trapped under the rubble of wrecked buildings. Civilians bore the brunt of the bloodshed, as usual. Loud cries of outrage and condemnation, both at home and abroad, did nothing to cease the attacks that left almost no neighborhood in rebel-held east Aleppo unmolested.

What made the carnage even more maddeningly unbearable was its indiscriminate nature. The helicopters that dropped the bombs did so from high altitudes, beyond the range of the rebels’ outdated anti-aircraft guns. A strike against targets at that distance using such primitive munitions is an absurdity and an impossibility. Hence by nature, these indiscriminate and deadly strikes on heavily populated areas sow fear and terror into the people on the ground, prompting them to flee and evacuate, which is probably the intended purpose of the attacks. Bloody and brutal though they may be, they are not irrational acts but part of some strategy, however warped it may appear.

Speculation is rife that these attacks might be precursors to an imminent assault on rebel-held areas of the city, as regime troops are consolidating their positions on the southern outskirts, with reports of more reinforcements arriving. It might also be the case that the attacks are simply a variation on the regime’s brutal tactics to subdue these areas. By causing death and misery in large doses, regime leaders hope to turn the people there against the rebels, who are helpless to protect them, blaming them for their suffering. It is a diabolical but effective plan that has paid off in some places, most notably in Madamieyeh, where embattled and besieged rebels recently agreed to a truce on the regime’s terms.

As has now become only too familiar during this tragic conflict, the rebels’ response to the regime’s indiscriminate violence against civilians has predictably been yet more indiscriminate violence, of their own, against civilians. Thus, the vicious cycle of madness continues, with each side murdering the innocents across the other’s line of control, usually regardless of their actual affiliation to one side or the other. In a grim but starkly realistic observation, a friend said that if rebels had scuds and barrel bombs of their own, they would be dropping them on our heads right now.

Meanwhile, the slow-grinding conflict on the ground rages on, with rebels taking over what’s left of the Al-Kindi hospital and regime barracks several kilometers north of Aleppo earlier this week, as regime troops stormed into and retook much of the strategic neighborhood of Bani Zeid on the northeastern outskirts of the city. No dramatic changes on the ground as of yet, but an air of expectation that something big is looming remains prevalent.

One curious observation, although perhaps not too much should be read into it at the moment, is that helicopter combat operations have resumed after having been grounded for months in Aleppo. This comes amid reports that North Korea has been sending pilots to assist the Syrian regime. Whether these reports are true, or if the resumption of helicopter missions is just a coincidence, might become clearer in the weeks to come. For the time being, the people of Aleppo are bracing themselves for the worst and hoping that this cycle of murderous madness soon ends.