Airstrikes continue to pound Aleppo, and despite mounting casualties and public discontent, the regime does not seem likely to budge. 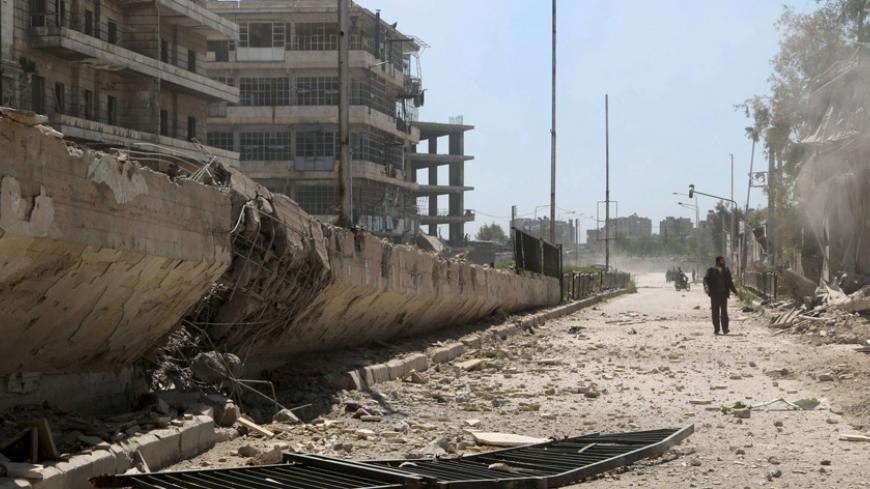 Residents inspect a damaged site after what activists said was a barrel bomb dropped by forces loyal to Syria's President Bashar al-Assad in Al-Shaar neighborhood of Aleppo, April 25, 2015. - REUTERS/Mahmoud Hebbo

ALEPPO, Syria — Those residents who remain in the city of Aleppo live in a state of constant fear, with the daily prospect of death. In this miserable city, scenes of destruction abound, as piles of rubble fill the sides of the roads. The sense of safety that may arise from the movement of people in markets and residential areas is offset by worries that these areas will be targeted by Syrian army shelling.

Since April 10, regime forces have intensified bombing of the neighborhoods of Aleppo controlled by the rebels, targeting schools and markets. In just the first five days of the campaign, 89 civilians were killed, including 22 children and 11 women, according to the Syrian Network for Human Rights. The types of bombing varied, ranging from explosive barrels launched from helicopters and raids carried out by warplanes, to highly destructive FIL missiles, which the regime typically fires in the evening.

The most commonly used of these means of killing are the explosive barrels, which are inexpensive and locally manufactured in research centers affiliated with the army. You see the people’s eyes fixed on the sky, as they watch a helicopter roaming above them at an altitude of more than 4 kilometers (2.4 miles). Suddenly everyone runs for cover inside buildings as the helicopter approaches — no one knows when the barrel will be launched. This is a daily scene of terror experienced by the residents here.

This escalation in bombing calls to mind the campaign waged by the Syrian regime against the city in late 2013. This campaign led to the displacement of the majority of residents and reduced hundreds of buildings to rubble, making the city resemble a ghost town. From Dec. 18, 2013, to March 19, 2014, 2,049 civilians were killed (including 571 children) by regime bombings. Yet, with the decline in the intensity of bombings during the winter, alongside the progress made by rebels in recent months, life had partially returned to the city.

Yet, a new bombing campaign has arrived to kill and displace the popular stronghold of the rebels, as confirmed by the regime’s deliberate targeting of residential areas. On April 11, a barrel bomb fell on a vegetable market in the Maadi district. After the bombing, which killed 23 civilians and injured dozens more, life was immobilized in this popular and crowded market that typically had dozens of pedestrians and vendors present in it. The following day, warplanes bombed the Saad al-Ansari school. There are dozens of massacres that occur on a daily basis, and cameras documented this one. There were female teachers without heads, mothers screaming as they frantically searched for their children and a man burned alive in his car. Eleven civilians died in this bombing; it was merely another number to be added to the death toll of those killed at the hands of the Bashir al-Assad regime.

Houses of worship, public squares and homes are all targets of the bombing. Those speaking on behalf of the regime are not ashamed to publicly call for extermination of the areas outside its control. “I wish [the regime] had a nuclear weapon to use and save us. … The regime has restricted its use of force and [the residents of these regions] haven’t seen anything yet,” Taleb Ibrahim said angrily. He is one of the most prominent media figures close to the regime, and said this in response to accusations by an anchor for Al-Arabi TV that the regime was using internationally prohibited weapons.

The most recent figure to make such calls was Ahmad Hassoun, the grand mufti for the regime. Speaking on Al-Sama TV, he said, “I hope, and I call on the Syrian army and the state [to ensure such], that any shell falling on Aleppo will exterminate the region [from which the shell is fired] entirely,” in reference to the mortar shells fired from rebel-held areas. While the rebel factions say that these shells are targeting the regime’s security branches, they are also resulting in civilian casualties.

Civil defense teams rush to each area that has been targeted by bombs, and members of these teams are constantly prepared for any emergency. They use wireless devices and look for smoke coming from bombed sites, so that the team can arrive to help rescue people.

Baybars Meshaal, the commander of the civil defense in Aleppo, told Al-Monitor in a recorded interview, “Usually planes carry out raids on four or five different locations simultaneously, requiring that we redouble our efforts and divide the team into several sections. This is not to mention that we already suffer from a lack of equipment and personnel.”

The civil defense centers themselves have not escaped the bombing. On April 14, regime planes bombed a civil defense center. “The bombing resulted in significant damage to our equipment. Thankfully, the personnel were OK, but the damage to the equipment could have halted the center’s work, yet we were able to get it working again.”

Civilians in rebel-held areas remain vulnerable to the regime’s aerial bombing. The only thing that can occasionally alleviate the bombing is bad-weather conditions, not the rebel fire directed at the planes nor the French-Turkish promises to establish a no-fly zone to protect them. Meanwhile, the bloodbath continues to flow.