Is Syria's 'fragile cease-fire' really a cease-fire at all?

The Syrian regime resumed its airstrikes on residential neighborhoods of Aleppo, which could mean President Bashar al-Assad isn't concerned about finding a political solution to the war. 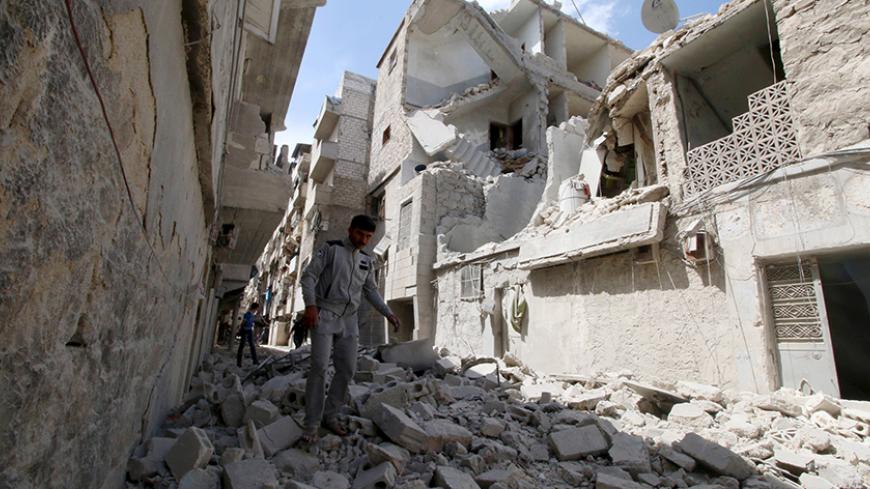 Residents inspect the damage after an airstrike on the rebel-held al-Maysar neighborhood in Aleppo, Syria, April 11, 2016. - REUTERS/Abdalrhman Ismail

ALEPPO, Syria — Syrian regime fighter jets stepped up their attacks on residential neighborhoods in Aleppo over the weekend, killing 42 people, including women and children, and wounding scores of other civilians.

The warplanes targeted buildings in numerous opposition-controlled neighborhoods, including a market in Sakhur. The regime, which had resumed shelling April 11, has intensified its efforts since then. The Syrian Observatory for Human Rights has documented the air force's shelling of numerous neighborhoods in the city.

“The shelling was very heavy on Friday, Saturday and Sunday," Khaled Khatib, media officer for the Syrian Civil Defense, told Al-Monitor. "The regime’s warplanes targeted vital areas in Aleppo, including 11 residential neighborhoods almost inside the city. The civil defense units saved an entire family that was stuck under the rubble of their own home that was shelled in Tarik al-Bab neighborhood on Saturday, April 23.

"The civil defense also pulled out the dismembered body parts of five people who died in the shelling of a public garden [market] in the Sakhur neighborhood. …The airstrikes killed 40 people, while a large number of people were badly injured,” Khatib added.

In light of the worsening shelling in Aleppo, the city's Directorate of Education suspended classes April 24-25.

“During the past few days, the death toll among children has risen tremendously due to airstrikes on the city. We fear for the children and teachers’ lives during school hours; this is why we decided to suspend classes," Mohammed Mustafa Abu al-Hassan, head of the directorate, told Al-Monitor. "We still do not know if we should resume classes on Tuesday [April 26]. It all depends on the developments on the ground."

Before the renewal of airstrikes, relative calm and security prevailed over Aleppo. Its citizens did not fear walking down the streets or allowing their children to play in public gardens with the onset of good weather. The markets were revived and shop owners kept their stores open late.

Abu Mohammed, who lives in al-Qatarji neighborhood, also told Al-Monitor, “We had witnessed a period of calm. Aleppo is one of the cities most affected by bombardment of all kinds, which forced most of its less fortunate citizens to migrate either to Turkey, Europe or Turkish camps. I have been here since the beginning of shelling in the summer of 2012.”

He added, “The cessation of hostilities was the quietest period in the city in more than three years. Today, the shelling has been resumed with missiles and mortars. We are tired of destruction and the news of our relatives’ and neighbors’ deaths. Aleppo has been reduced to rubble; it was one of the most significant cities in Syria. Unfortunately, there is no one in the entire world who could stop the criminal [President] Bashar al-Assad from killing the people and destroying the country."

Activists in Aleppo said Bashar resumed shelling to send a message to the world that he is not concerned about reaching a political solution to end the war that has been raging for five years.

“I believe the regime’s mindset does not allow it to stop killing those who oppose it. Since the very first day of the revolution, the regime has been keen on killing and shedding the blood of Syrians. Innocent people have died in the shelling, people whose only fault is that they happen to live in the opposition-held areas," Yaman al-Khatib, a journalist and media activist from Aleppo, told Al-Monitor.

“I do not deny the fact that the regime was relatively committed to the truce under international pressure, especially by its Russian ally. Yet, it did not take it too long to resume the killing of Syrians."

Buoyed by international militias and heavy military support from Russia, the regime forces have been conducting an offensive on the countryside south and north of Aleppo, seeking to advance toward the Handarat Camp in the north to take control of the Castelo road, the only humanitarian corridor connecting the city to its rural areas in the north and west. Bombardments have partially closed the road. Shaaban Omar Badawi, a civil defense member, was killed while his team was pulling out the wounded in that area.

The regime managed to take over several areas inside the opposition-controlled western Aleppo neighborhood of Salahuddin. On April 19, the opposition retaliated with a sudden attack on the regime’s sites. To the south, violent clashes and fighting are raging without any advance by either side.

Fatah Halab (Conquest of Aleppo) on April 23 gave the international community 24 hours to pressure the regime to halt the airstrikes on the city’s neighborhoods, threatening to dissolve the cease-fire agreement between the rebels and the regime forces should the shelling continue after the deadline. There has been no word on the outcome.