While the Syrian regime claims that its airstrikes are carried out against Jabhat al-Nusra’s military positions, the reality on the ground shows that it is targeting residential neighborhoods. 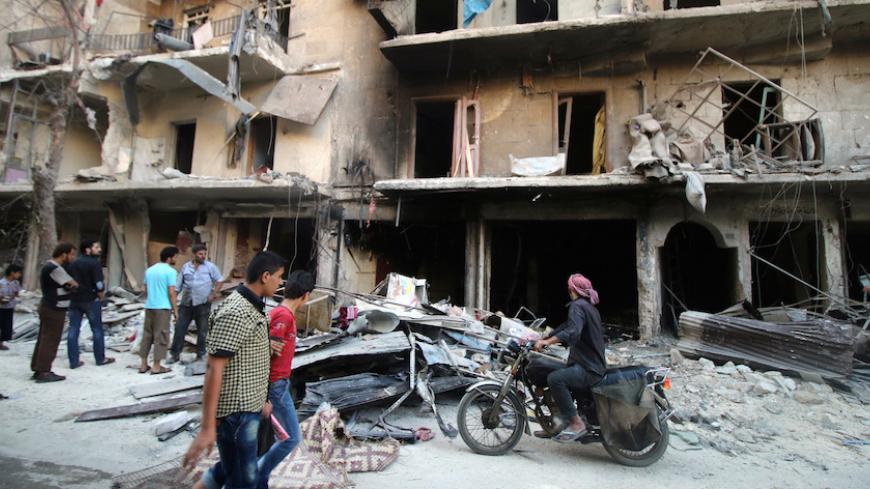 ALEPPO, Syria — While the Syrian regime’s air raids follow in succession, targeting residential neighborhoods in opposition-controlled areas in Aleppo, the regime is circulating news that these airstrikes are targeting Jabhat al-Nusra’s military positions in Aleppo city. Fighter jets, for instance, targeted the Seif al-Dawla neighborhood of Aleppo on July 2, killing four people and wounding others.

According to Brett McGurk, the US representative to the anti-Islamic State coalition, these raids are carried out against residential neighborhoods, field hospitals and civil defense stations in the city. He told the Senate Foreign Relations Committee on June 28 that the Syrian regime’s air force is a “criminal enterprise” dropping barrel bombs on civilians, while pretending that it is attacking Jabhat al-Nusra. He said that if the regime continues to target civilians, a favorable environment for terrorist organizations will be generated.

The presence of Jabhat al-Nusra in Aleppo province is limited compared with its presence in the city of Idlib and the Idlib countryside, which are Jabhat al-Nusra’s stronghold in Syria. The regime’s air raids are largely focused on the opposition-controlled residential neighborhoods in Aleppo city.

Moreover, the Syrian Observatory for Human Rights reported June 22 that 670 civilians were killed in Aleppo city between April 22 and June 22, including 323 people in airstrikes on residential areas. Artillery and rocket attacks on the city's neighborhoods killed 58 people.

Ahmad Mohamad, a human rights activist at the Syrian Institute for Justice, told Al-Monitor, “Since its first air raid in Syria, the regime has been lying and deceiving the international community by saying that its strikes are carried out against military positions and engagement lines. These are lies spread by the regime. The international community and major powers following up on Syrian affairs are aware that the regime is lying and that its air force is targeting residential areas and medical centers. The presence of Jabhat al-Nusra in Aleppo province does not justify the killing of dozens of civilians on a daily basis; this is forbidden under international law. The Syrian Institute for Justice documented that 2,306 airstrikes were conducted, 1,254 barrel bombs were dropped by helicopters, 354 cluster bombs were dropped and 194 prohibited phosphorus bombs were used against 1,634 residential areas, 11 medical centers, 10 mosques, seven schools and three civil defense centers in the city of Aleppo and its countryside in June.”

On May 2, US Secretary of State John Kerry considered the Syrian regime responsible for shelling Al-Quds hospital in Aleppo city and said it was an "unconscionable act."

Activists in Aleppo city perceive that the Syrian regime’s objective behind circulating news that its airstrikes are targeting Jabhat al-Nusra in Aleppo and Aleppo countryside is to tell the international community that the Syrian regime is still concerned with the fight against terrorism. They view that the regime is taking advantage of the weak presence of Jabhat al-Nusra in Aleppo province to obtain international legitimacy for the raids on the city's neighborhoods.

Aleppo is of great importance for the regime forces. Besides being the second-largest Syrian city, it is Syria’s economic hub. Hezbollah Secretary-General Hassan Nasrallah, an ally of the Syrian regime, said June 24 that the biggest strategic battle for the regime forces and Hezbollah is taking place in Aleppo. He added that the objective of the battle in Aleppo is to defend Syria as a whole and is of great importance in order to foil the international and regional project designed to bring Syria down by bringing foreign fighters into its territory.

Iman Khatib, a journalist and media activist in Aleppo, told Al-Monitor, “Since the Syrian revolution was armed, the regime has been targeting and committing massacres against civilians to achieve two goals. The first is to cause the Free Syrian Army and the revolutionary factions to lose popular support. The second goal of heavy airstrikes on civilian areas — which occur in parallel with the pro-regime media campaign that the regime’s raids are targeting Jabhat al-Nusra’s positions — is to tell the international community that the regime is protecting the Syrian people from extremist terrorism. Unfortunately, in one way or another, many countries believe this lie. The Syrian regime — which was known as a dictatorship by major powers — is today fighting terrorism!”

Activists in Aleppo city are working on collecting audio and video recordings of the fighter jets’ airstrikes, barrel bombs dropped by helicopters and missiles to refute the Syrian regime's claims that this heavy shelling is targeting military positions or engagement lines.

Aleppo province, which was home to 6 million people prior to the military operations there, and which used to be Syria’s economic hub, has become almost depopulated after most of its inhabitants fled to neighboring countries or Europe, due to the city’s insecurity and great destruction by the constant shelling on residential neighborhoods since July 2012.