As the Islamic State continues to prevent the entry of fuel into rebel-held areas, all vital sectors in northern Syria are deeply affected. 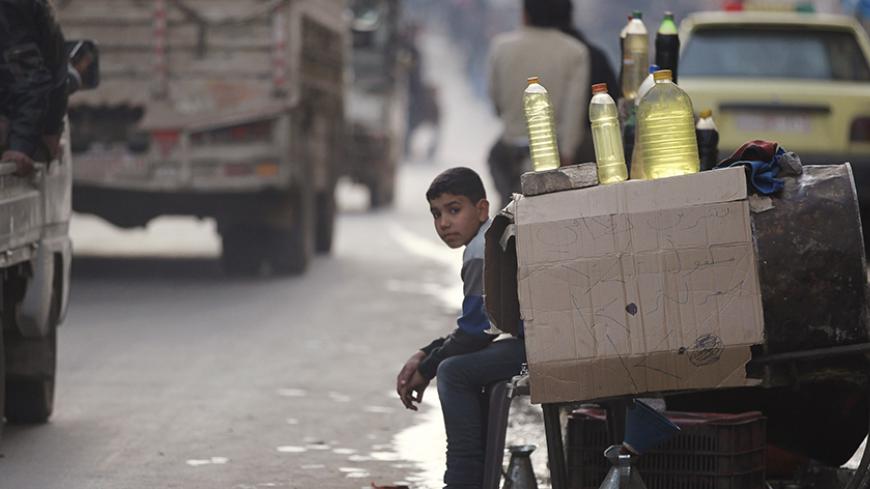 ALEPPO, Syria — The rebel-held parts of northern Syria that extend from Aleppo to Idlib and through Hama’s northern countryside are paralyzed; vehicular traffic is significantly reduced while fuel vendors are no longer present on the side of the roads. This was not the case before May 31, when the Islamic State (IS) prevented the entry of fuel to rebel-controlled areas.

The month of Ramadan is different this time around in the city of Aleppo, nearly half of whose neighborhoods are under the control of rebels. Markets there are undergoing an unprecedented recession, and customers are complaining about the higher prices of commodities in general. Fuel scarcity and high prices have also led to an increase in prices of all basic necessities, including food, locally manufactured goods, transportation and water.

During our visit to Aleppo city June 23, a diesel trader told Al-Monitor that the few diesel shops sell the fuel barrel (220 liters, or 58 gallons) for $260. The price of a fuel barrel before IS imposed the fuel embargo was $60.

Fuel supplied through IS is the primary source of energy in the rebel-controlled areas, with a smaller quantity coming from regime-controlled areas. According to a study conducted by the Ministry of Energy and Mineral Resources in the interim Syrian government in May, nearly 80% of oil and gas fields in Syria are controlled by IS, 12% by the Kurdish People's Protection Units and 8% by the regime, most of which are gas fields.

Traders, who are not affiliated with IS, transport fuel in tank trucks from IS-controlled areas in eastern Syria to the rebel-held parts. A trader told Al-Monitor on condition of anonymity, “It [fuel transportation to rebel-held areas] has been banned.”

The diesel trader returned to the rebel-held areas June 22 empty-handed, saying, “IS members empty the fuel tanks of cars heading to the rebel-held areas, to a quarter full. ... They thoroughly search the cars for fuel, and if they find out that someone is smuggling fuel, they severely punish him, by either throwing him in prison or whipping him.”

IS imposed the fuel embargo on the rebel-controlled areas to weaken and put pressure on the rebels. The embargo coincided with an offensive IS launched on Aleppo’s northern countryside May 31, imposing its control over Souran and several villages.

The trader said that while he was waiting for his turn to be searched, an IS member searching a car heading to the rebel-controlled areas said, “I swear I will make it so that the rebels’ Panzers have to be pulled by donkeys!”

The embargo has left its impact on all facilities. The provision of diesel is no longer an easy task, particularly since electricity (supplied by the regime’s power plants) is almost totally cut off in the city of Aleppo. Several bakeries have closed or reduced their working hours. Private generators — which people pay for monthly in light of the power outages — cut down their operating hours from 12 to four hours a day.

The embargo has also affected the medical sector and impeded the work of medical teams, which poses a direct threat to people's lives. Abdul Razzaq al-Darwish, the director of the Central Blood Bank of Aleppo, told Al-Monitor, “Lack of fuel may lead to total inactivity in the medical sector.”

Darwish warned against a disaster that may be inflicted on the medical sector in case fuel remains scarce and its prices stay high. He said, “All hospital equipment and departments depend on electricity, whether the sterilization process, radiography or even operating rooms. In the absence of the diesel required for the generators to operate, hospitals will be forced to halt or suspend their activities.”

The civil defense teams also rely on diesel to operate the vehicles they use when rescuing victims and retrieving them from under the rubble, as a result of the regime’s almost daily air raids on the city of Aleppo. Baybars Meshaal, the civil defense commander in Aleppo, told Al-Monitor that “99% of our vehicles, such as bulldozers and firefighting vehicles, operate on diesel.”

Meshaal added, “Should fuel remain scarce, our operating expenses will rise to the point that we will no longer be able to afford them. This, in addition to our fuel stockpile running out, would halt our activities, which could pose a daily threat to the lives of dozens of people.”