Syrian rebels have responded to the presidential elections with a ferocious campaign on regime-held areas in Aleppo. 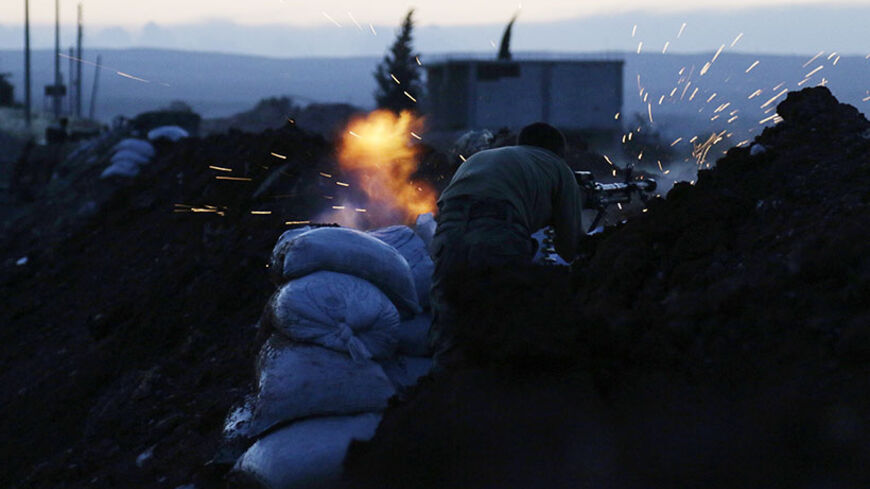 ALEPPO, Syria — They’ve been called the blood elections by the Syrian opposition, and that name might be appropriate in more ways than one. As the war and slaughter continue to engulf most of this tormented nation, holding presidential elections might seem very bizarre and macabre, yet there is undeniable logic in it all. For the regime, it is not about filling a constitutional void, or even about legitimacy, as no one is under the illusion that these elections are anywhere near free and fair. In fact, the outcome is a foregone conclusion: another seven-year mandate for Bashar al-Assad and another rubber stamp vote, albeit this time with two token contenders. All previous elections during the time of the Assad clan were referendums with only one candidate.

No one seriously believes that the embattled Assad and his regime would give up power so easily to a ballot after fighting tooth and nail for three years and bringing the entire nation to the brink of annihilation to retain it. What is the reason for the elections then, if they will not change anything on the ground or in the political landscape? The answer is quite simply to send a strong message to the world, that the regime is still and will continue to be in power. It will boast that it has the support of millions of Syrians, both inside and outside the country, thereby discrediting and destroying the prevalent narrative of the opposition and their backers that the conflict in Syria is an overly simplistic "regime against its people" scenario. For the regime, just getting people to turn out in large numbers, especially outside Syria, is a huge victory in and of itself.

Herein lays the importance of the elections to the regime, and why they make the opposition and the rebels despair and seethe with anger. The scenes from Lebanon last week, of tens of thousands of Syrians flocking to their embassy to vote, sent shock waves through the visibly irritated and angered anti-regime camp. Those scenes are being repeated today, as voting in regime-held parts of the country begins. The official Facebook page of Assad’s election campaign “Sawa” has put up pictures and videos of polling stations and voters, including Assad and his wife casting their ballots at a school in Malki, Damascus.

It is scenes like these that infuriate many armed rebel factions, which have vowed to disrupt the elections in any way possible. Unfortunately, this inevitably meant bombing and shelling polling stations and regime-controlled areas, which they specifically threatened to do. One rebel posed in a picture with a cooking canister filled with TNT, with “election present” written on it. A later statement, reportedly issued by various rebel factions, said they would not target voters but warned people to stay at home in case the regime does. This seems to be, as is quite typical of such grandiose rebel declarations in the past, merely media fodder and ink on paper as the shelling continues unabated.

As is tragically only too common, Aleppo has borne the brunt of rebel anger, as shells and rockets fired from their positions in the east of the city fell heavy as rain in the days leading up to the vote, and continue to do so as I write this and as the voting gets under way. The mayhem and slaughter is unprecedented in the regime areas as hundreds of shells left no neighborhood unmolested. Streets became deserted as people stayed indoors and shops closed, hoping to avoid random death from above. Of course, dozens were not so lucky, and the civilian death toll from just two days of rebel shelling stood at over 50, with scores more wounded and large areas devastated, especially in the Midan neighborhood, an Armenian quarter adjacent to the Bustan al-Basha rebel stronghold. The scenes of death and carnage, especially among children. were so shocking and horrific that even staunchly pro-opposition groups had to speak out against them and demand they stop.

Yet, the bombs ceaselessly continue to fall, claiming even more lives as students attended exams at colleges and schools where ballot boxes were placed, and civil servants were herded from work to polling stations, many against their will but fearing reprisal if they refused to go. Needless to say, the vote is riddled with irregularities and violations, such as multiple voting and improper ID checks, but that is the least of the people’s imminent worries. In many cases, regime loyalists braved the danger and went out to vote to spite the rebels, but many people did not, and the turnout is understandably low in Aleppo.

The regime seems helpless to stop the incessant rebel attacks that have paralyzed the city and spread fear and panic among its by now very resilient populace, save for intensifying their own bombing of rebel areas as a sort of impotent, half-baked attempt at halting rebel fire. It has not worked; it has only killed more innocent people and wrought even more havoc on the devastated and now largely deserted east of the city.

The bloody fiasco that is Syria’s elections goes ahead, as the hapless people of this nation are hammered daily by a relentless, hate-filled inferno of a war. The regime crowns its victory in blood, while its opponents shed the blood of the innocent in blind, retaliatory rage. Syrians are under no illusion that this regime is or can ever be democratic. Neither do they believe that those who fight against it will offer them anything better.