The unpredictable winds of war will determine whether the Kurds ever realize their dream of self-government in Syria. 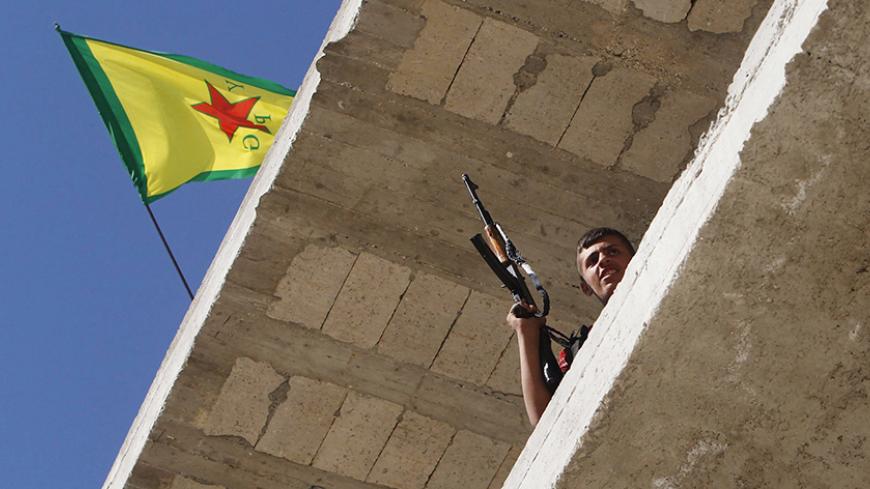 A Kurdish fighter from the People's Protection Units (YPG) holds his weapon as he takes position atop a building with a YPG flag in Aleppo's Sheikh Maksoud neighborhood, June 7, 2013. - REUTERS/Muzaffar Salman

Among all the complex alliances and shifting loyalties in Syria, the Kurds seem caught in the middle. Common sentiment is that the Kurds are now at a critical threshold of relations with the Damascus regime, and the outcome could be cooperation or, just as easily, combat.

Much hinges on how the regime reacts to the government models of "democratic autonomy" or "democratic federation" that the Kurds have been advocating and trying to install in western Kurdistan (Rojava).

As preparations for the major assault on Aleppo were going on in September, Russia arranged a meeting between Kurdish representatives and the Syrian regime at Khmeimim air base to see if they could find common ground on autonomy.

Kurdish officials told Al-Monitor that the meeting did not produce an agreement and that there have been no more contacts with Russia. The Kurds say it is important for them to maintain contact with Russia and the regime of Syrian President Bashar al-Assad to keep Afrin and Sheikh Maksoud from turning into deadly war zones.

This apparent coordination between the Syrian regime and the Kurdish People's Protection Units (YPG) against armed groups that were keeping Sheikh Maksoud under steady fire have prompted comments about "Kurdish-regime cooperation." But it is not that simple. What we have is friendship and enmity coexisting.

This unusual, fragile coexistence was best illustrated Nov. 28 when the YPG and Syrian flags were flying together over the agriculture office of Aleppo's Bustan al-Basha neighborhood, as it was being abandoned by opposition groups including Jabhat Fatah al-Sham, Ahrar al-Sham and the Nureddin Zengi Brigade.

But in Aleppo, nothing is what it seems. Kurdish news sources, without referring to the army’s role, keep reporting how the YPG and the Kurdish Women's Protection Units have liberated Hellok, Bustan al-Basha, Heydarieh, Hanunu, Sheikh Faris, Baidin, Ain El Tel and Inziraat neighborhoods. One fact is confirmed, though. The Syrian regime and its allied militias advanced from Heydarieh in the west, and the Kurds from Sheikh Maksoud in the east, and they linked up somewhere in the middle.

A YPG commander who spoke to Al-Monitor on condition of anonymity explained the operation's development and the flags over the agriculture office: “When armed opposition groups withdrew from areas around Sheikh Maksoud, we took over. Those were the groups that were regularly attacking Sheikh Maksoud. We cleaned out Sheikh Khidir, Hanunu, Bustan al-Basha and Inziraat. We were surprised by the speed of their unexpected withdrawal. We were expecting violent clashes, but they withdrew to more strategic locations.

"I can tell you that there was actually a race between the Syrian army and the YPG to fill the void left by their opposition. As for the agriculture office, it was a building we wanted badly. The army also wanted it. So we raced to hoist our flag, but it was actually a race to occupy a key position. We nearly clashed with the army, but our fighters withdrew and lowered our flag to avoid fighting. Sheikh Maksoud is a sensitive area. We can’t afford a clash with the Syrian army, so we opted to expand our territory around Sheikh Maksoud without confronting the army.”

Was there coordination between the YPG and the army during the Nov. 26-28 operation? What will the Kurds do if the Syrian army wants to control Sheikh Maksoud?

The YPG commander replied, “We discussed with the army not a joint operation in east Aleppo, but how we will defend that area. We have checkpoints there — so does the army. We don’t expect an army attack against Sheikh Maksoud. … We know it is geographically distinct from Rojava, but aspirations are the same. Sheikh Maksoud is an important issue of the federation debate. … [It] cannot be an independent entity. That neighborhood cannot survive as an island in the middle of Aleppo. But if the state insists on taking it over, we will resist. What Kurds will do with Damascus in a way depends on the attitude of the major powers [Russia and Iran] backing Syria. Russia is concerned and is trying to find a solution.”

A Syrian journalist who was recently in Sheikh Maksoud assessed for Al-Monitor the Syrian regime’s policy: “There is an effective established order, a system, in Sheikh Maksoud. Every neighborhood has councils that take care of daily affairs. These councils have a woman and a man as co-chairs. But autonomy is a very complex issue. It won’t be easy to incorporate it into the Syrian Constitution. But I still don’t think the Syrian army will enter Sheikh Maksoud. Kurds are the only trump card Syrians have against Turkey. That is why the status quo will survive. To fight the Kurds now will not be in the interests of the Syrian government.”

There is also talk of Syrian army cooperation with the Kurds regarding al-Bab, Turkey’s primary target in its Operation Euphrates Shield. Kurdish-led Syrian Democratic Forces (SDF) want to turn the zone between Manbij and Afrin into a safe zone for the Kurds. The Turkish army is trying to thwart that goal. Some observers interpreted the Syrian army’s shelling of Turkish-supported groups advancing to al-Bab as signaling the regime’s support for the Kurds. The YPG commander tried to clarify: “There are complications about al-Bab. For example, our SDF partner, Jaish al-Thuwar, declared they won’t fight FSA [Free Syrian Army] around al-Bab. We respected that. At the moment there isn’t much we can do in that area.

"An alliance that opposes YPG control of the area has emerged. Russia, Syria, the United States and Turkey don’t want the YPG to dominate. Now we are seeing another group, called Syrian National Resistance. We are in touch with them, but our forces are not near them. We stay away from Jaish al-Thuwar. In other words, in that area, local Arabs are spearheading the resistance against the Turkish army and the groups it supports. These are pro-regime Arabs. [In this particular situation] our goals are conflicting.”

There were some clashes between the Kurds and government forces in Aleppo in the first phases of the Syrian crisis. Although the Kurds reject allegations that they are cooperating with the regime, both Assad and his adviser, Bouthaina Shaaban, several times said that they have been assisting the Kurds and that there was coordination between them.

The clashes, but also the contacts, between the Kurds and the Syrian army/pro-regime militias have illustrated that the Kurds are not a front confronting the regime and that the regime is not an assurance for the Kurds. Whether the Kurdish aspiration for autonomy will become reality depends on new balances that are bound to emerge.