US official says measles next menace to Syrian children

A month after the UN Security Council demanded urgent access to Syrians in need, USAID assistant administrator Nancy Lindborg has told Al-Monitor that the Syrian government continues to hamper aid delivery and to bombard civilians with barrel bombs. 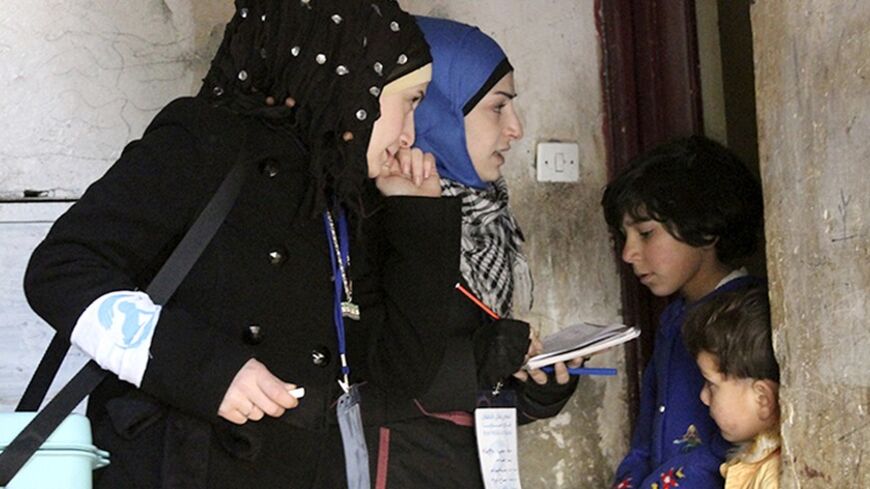 A senior US aid official has warned that the next health crisis facing Syrian children may be measles, as the Syrian government refuses to implement a UN Security Council resolution demanding urgent improvement in humanitarian access to war-battered populations.

In a March 31 interview with Al-Monitor, Nancy Lindborg, assistant administrator for the Bureau for Democracy, Conflict and Humanitarian Assistance at the US Agency for International Development (USAID), said that the World Health Organization (WHO) and UNICEF have managed to make progress against an outbreak of polio in Syria, but added, “What we are seeing with the coming of warm weather is the possibility of measles outbreaks.”

While the polio vaccine can be relatively easily transported and administered orally, the measles vaccine must remain chilled and be administered by injection, making it even harder for aid workers to reach vulnerable populations. The threat has grown because of the collapse of the Syrian public health system over the past three years of war and, increasingly, the lack of food.

“We’re starting to see real malnutrition in the under-5 population,” said Lindborg, further explaining that malnutrition weakens resistance to infectious diseases. “WHO and UNICEF have been very heroic, with more success than anticipated on polio. The measles piece will be much more challenging.”

Lindborg spoke a few days after UN Secretary-General Ban Ki-moon delivered a devastating report to the UN Security Council accusing Syria of failing to implement a resolution passed unanimously in February demanding better access for the delivery of humanitarian aid to more than 9 million Syrians in need of assistance.

According to the report, about 3.5 million Syrians — an increase of 1 million just this year — are in so-called hard-to-reach areas, and more than 200,000 are in areas that have had no outside help for months and some even years.

Lindborg said the continued use of barrel bombs by the Syrian government was among the most disturbing aspects of the report. “It is literally a barrel packed with pieces of iron and rebar — things [used] expressly to kill people and specifically to terrorize the population and kill civilians,” she asserted.

“Since Jan. 20, the government has ramped up its campaign of dropping barrel bombs into residential neighborhoods of Aleppo city, with devastating consequences for civilians,” the report said, noting that since January, a half million residents of Aleppo have fled the city, once Syria’s most populous. “In launching these attacks, government forces made no effort to distinguish civilians from military targets. Other examples reported by UN field sources include the dropping of barrel bombs on Hmeirat in northern rural Hama governorate on March 3, killing at least nine civilians, and on both western [Yadudeh and Mzeirab] and eastern rural areas [Neimeh] of Deir Ez-Zor governorate on March 3 and 4.”

The UN resolution highlighted the need for access to 175,000 Syrians in areas besieged by government forces and another 45,000 in areas held by opposition groups. Lindborg, who had just returned from a trip to the region, said she had met a young boy in Jordan from eastern Ghouta, a rebel-held suburb of Damascus where 160,000 people have gone without outside aid for six months and that was the target of a massive chemical weapons attack last August. The boy had a “shell-shocked, haunted look,” Lindborg had observed. “It’s barbaric that [the Syrian government is] having this kneel-or-starve campaign.”

Another demand in the UN resolution was for the Syrian government and opposition groups to facilitate cross-border access to needy areas. The Assad government, however, has allowed only one limited shipment of aid, on March 20, through a checkpoint on the Turkish border at Qamishli. “That has been the only instance,” Lindborg said. “It was regrettably not an indication of progress — not in volume, and it has not been sustained.”

Syria has refused to open a half dozen other border crossings that would allow relief agencies to reach some of the most desperate populations more easily than they can from Damascus. “The most important are Bab al-Hawa and Bab al-Salameh,” Lindborg said, naming the locations that would provide access from Turkey to more than 3 million people in Aleppo and Idlib governates. “There’s been no progress on that.”

According to Ban’s report, the United Nations is also requesting that the Syrian government allow aid shipments to cross from Jordan through the al-Naseeb and Tal Shihab crossings to reach nearly half a million people in Daraa and Quneitra governorates.

UN relief agencies are operating in refugee camps outside Syria and from headquarters in Damascus. Lindborg and the UN report faulted the Syrian government for raising bureaucratic obstacles to relief work emanating from the Syrian capital.

“Even the action that comes out of Damascus is greatly hindered by the way the regime gives permission today but not tomorrow,” Lindborg noted. The government will “let this go but not that. It won’t let certain [nongovernmental organizations] leave and there are also problems with visas. It’s just a whole slew of ways to get in the way of assistance reaching those who need it.”

According to the report, despite the creation of a new working group after the passage of the UN resolution, “There has been no progress in streamlining and speeding up procedures to facilitate inter-agency convoys … and the process for approval remains extremely complex and time-consuming.” The United Nations has to notify the Syrian Foreign Ministry 72 hours in advance of plans to dispatch a convoy, and if the request is approved, get letters from the Syrian Red Crescent and Ministry of Social Affairs as well as the Ministry of Health if medicine is part of the aid.

Asked what was being done to increase pressure on Damascus to ease these bureaucratic obstacles and otherwise implement the UN resolution, Lindborg explained, “On the basis of this report, there will be additional pressure [on the members of the UN Security Council] to try to hold people’s feet to the fire.” She would not comment on whether the current crisis between the United States and Russia over Ukraine would affect Russia’s willingness to use its leverage with the Syrian government.

Syria is one of three so-called level 3 humanitarian emergencies in the world at present. The others are in South Sudan and the Central African Republic. While Syria is by far the worst in terms of scale, Lindborg said the three crises share some features.

In all three, she said, “We have, fundamentally, leaders who are not taking responsibility for their people, who are privileging actions that are about personal power, corruption or greed, and you’ve got enormous suffering as a result. All three of these are countries where … people have been forced apart on ethnic and religious bases, whereas previously that was not the case. There’s some commonality to the Balkans in that [the] leadership uses these differences and polarizes people. It’s heartbreaking.”

Lindborg urged Arab donors to give more to international relief efforts, noting that only Kuwait has been a major contributor, and thanked the US Congress for its willingness to appropriate $1.7 billion, even as it criticizes the Barack Obama administration for its failure to find a strategy to resolve the conflict.

In the midst of all this gloom, Lindborg noted, there is one bright spot. The World Food Program has recently started issuing debit cards to Syrian refugees to purchase food. Lindborg shared that she had visited a group of women in Amman who had just received their cards.

“Instead of lining up to get bags of food or having to go to a center once a month to get a voucher and having to be in a special line in a participating supermarket, they now have this handy card that gets automatically loaded once a month,” she said. “They can go to participating supermarkets and shop just like other shoppers. It gives them much greater flexibility and dignity.”

The program has also pumped about $140 million into the local economy and created 350 jobs, Lindborg revealed. It is part of an effort by USAID to marry emergency relief with longer-term development to help build resilience in countries that are likely to have to host Syrian refugees for many years to come.