Collapsed health care system may be biggest threat to Syrians

The European Union’s senior humanitarian official tells Al-Monitor that normally preventable diseases are killing twice as many Syrians as fighting. 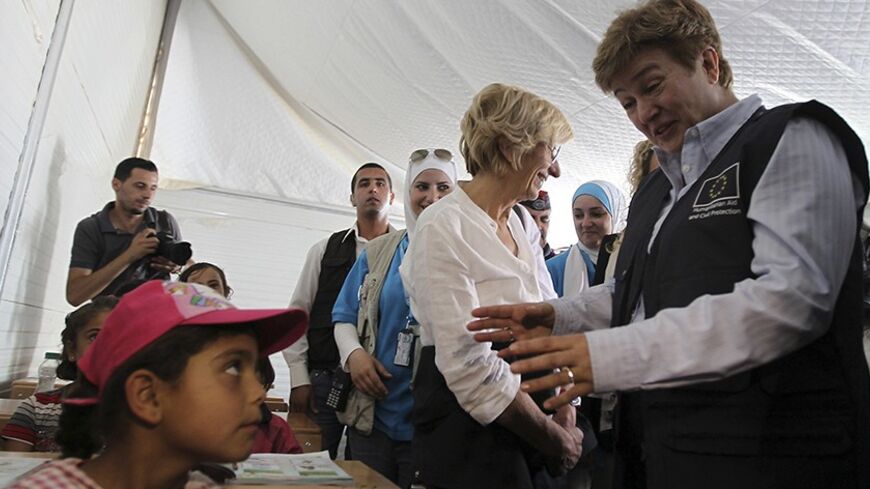 EU Commissioner for International Cooperation, Humanitarian Aid and Crisis Response Kristalina Georgieva (R) and Italy's Foreign Minister Emma Bonino (2nd R) speak to students during their visits to a UNICEF school at the Zaatari refugee camp in the Jordanian city of Mafraq, near the border with Syria, June 25, 2013. - REUTERS/Muhammad Hamed

WASHINGTON — More Syrians have died from lack of adequate medical care than from actual combat as the war grinds on into its fourth year, according to Kristalina Georgieva, the European Union’s commissioner for international cooperation, humanitarian aid and crisis response.

In an interview with Al-Monitor on April 11 in Washington, where she attended a coordination meeting at the US Agency for International Development (USAID) with other groups struggling to keep up with the spreading humanitarian consequences of the Syrian crisis, Georgieva said that “over 200,000 people have died because treatment is not available anymore in the collapsed health system of Syria.”

While Syrian leader Bashar al-Assad has consolidated control over a significant part of territory, the country’s economy has fallen apart, the European commissioner said, and nearly half the population — almost 10 million people — need assistance.

Increasingly, aid workers are reporting cases of malnutrition and starvation, which make weakened populations even more vulnerable to diseases such as measles, Georgieva said. She said she recently visited the northern Kurdish section of Iraq, which is now home to some 230,000 Syrian refugees.

“A large proportion of them flee not because of the fighting,” she said, “but because their children are starving and they cannot access very basic necessities.”

The crisis persists despite passage in February of a UN Security Council resolution demanding that the Syrian government improve access for humanitarian agencies and stop bombarding civilian populations with barrel bombs. Georgieva echoed USAID Assistant Administrator Nancy Lindborg in charging that the Syrian government has not complied with the resolution in more than a token fashion.

For example, Syrian authorities continue to stop humanitarian convoys and remove surgical kits and medicine, she said. The Syrians are worried that these life-saving items will go to the rebels, she said, but “under international humanitarian law, this is a war crime to deprive even a combatant, let alone a civilian, from access to treatment.”

In response to a question, Georgieva said she had reached out to the Russians and the Iranians to try to increase pressure on the Assad regime to improve access for humanitarian aid but with only minimal results.

“The resolution is the only platform we currently have in our hands to pressure for access,” she said. “We have been reaching out to Russia because of the clear advantage they have in talking to the government. … Russia has been in some cases instrumental to get the government to allow access to provide more visas and to reduce bureaucratic hurdles but not to the extent that is necessary.”

Georgieva acknowledged that the current crisis over Ukraine is a “very big cloud hanging over” efforts to influence Moscow. She insisted, however, that “we have to be able to separate the crises and make sure that every possible effort is made to get more access” within Syria.

While the United States is the single largest donor of humanitarian aid to Syrians, the European Union has collectively provided more than twice the funds — $3.5 billion — and has been proactive in terms of planning for an expanding and open-ended crisis.

“We were the first to say this is beyond a humanitarian issue,” Georgieva told Al-Monitor. “We need to bring in development funding for Lebanon and Jordan to help them withstand this pressure” from Syrian refugees and “involve the development organizations, have the World Bank and IMF [International Monetary Fund] around the table.”

Georgieva said that the European Union was also the first to focus on Syrian children and the likely loss of a generation in terms of education and mental as well as physical trauma.

“Kids that are not in school, what is their alternative?” she said. “Obviously radicalized youth become a real threat.” She compared the potential ramifications of the loss of a Syrian generation to that of Somalia, Liberia and Afghanistan.

The international community has pledged to raise $1 billion to focus on the needs of Syrian children, and Europe has already contributed $200 million, she said.

Georgieva said that European development organizations are already working on a three-year time frame and anticipate that the conflict — and its consequences — will likely endure far longer. If there is any silver lining to the crisis, she said, it is that it is pushing aid groups to coordinate and be more inclusive.

While the United States, Europe and other traditional aid donors such as Japan are accustomed to working through the UN and other international organizations, it has been a challenge to get wealthy Arab countries to take part. Kuwait has been an exception, hosting donor conferences and contributing significant funds. Georgieva said that she had just heard from UN Undersecretary General Valerie Amos that the United Arab Emirates has pledged $60 million through the UN system. Georgieva praised the decision and credited the UAE’s development minister, Sheikha Lubna al-Qasimi.

A fast-talking economist from Bulgaria who has previously served in the World Bank and has been mentioned as a possible future UN secretary-general, Georgieva told Al-Monitor in an interview a year ago that Syria “is the crisis that makes me lose my sleep.”