US slashes millions in Yemen aid despite pandemic

As Yemen stares down a coronavirus crisis, the United States is set to slash $73 million in humanitarian assistance because of worsening Houthi aid restrictions. 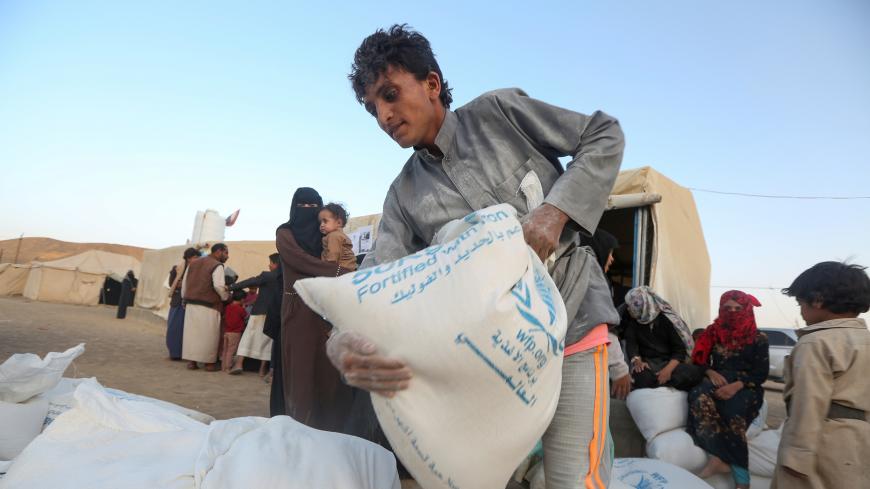 A man carries a sack of wheat flour he received at a camp for people recently displaced by fighting in Yemen's northern province of al-Jawf between government forces and Houthis, in Marib, Yemen, March 8, 2020. - REUTERS/Ali Owidha

The Donald Trump administration is set to eliminate the majority of humanitarian assistance to Yemen amid concerns that a looming coronavirus outbreak will further decimate the war-torn country’s public health sector, which already struggles to cater to millions of immunocompromised Yemenis.

The Trump administration argues that the cuts, first reported by the Washington Post, are necessary because of onerous new aid restrictions on international delivery set up by the Houthi rebels, who control most of northern Yemen.

“Interference in aid operations is not acceptable anywhere, but the Houthis’ actions are particularly egregious,” a spokesperson for the US Agency for International Development (USAID) told Al-Monitor. “This decision is a last resort. The United States, other donors and international aid organizations have been advocating with the Houthis for years to allow aid groups to operate independently, but we have now reached a point where continued obstruction has made it impossible to ensure aid is reaching those who need it most.”

Still, the steep cut has even drawn out opposition from some humanitarian aid groups that have taken a harder line on Houthi aid obstruction in recent months. They argue that the cuts are particularly irresponsible as the World Health Organization has warned of a coming “explosion” of COVID-19 cases in Yemen.

Lise Grande, the United Nations humanitarian coordinator for Yemen, told Al-Monitor that slashing US assistance would cut off even more Yemenis from lifesaving programs.

“We don’t have a choice,” Grande said. "We’re going to have to reduce and possibly stop the assistance we provide to millions of Yemenis who depend on the generosity of the international community to survive. People here have no one else to turn to and nowhere else to go. It’s heartbreaking. It truly is.”

Some 80% of Yemenis are dependent on foreign assistance, and the United States provided some $700 million in humanitarian aid for Yemen last year.

USAID noted that it would continue funding $12 million in “critical lifesaving activities” while it continues operations in southern Yemen. Additionally, the USAID spokesperson said that the United States is “carefully and continually evaluating the situation on the ground with our partners so they can pivot current relief activities to address changing urgent needs, including COVID-19 preparation and response, if necessary.”

But Aisha Jumaan, an immunologist and the president of the Yemen Relief and Reconstruction Foundation, said that “over 90% of health services are provided by the [Houthi] government in Sanaa,” as most of the Yemeni population lives in the north.

Jumaan estimated that “about 80%” of Yemenis are already immunosuppressed, putting them at high risk of dying should they contract coronavirus. The war between the Iran-backed Houthis and Saudi-led coalition has malnourished half the population on top of a cholera outbreak last year and a severe swine flu outbreak this year. She also noted that 50% of the health system is compromised because of the Saudi-led blockade and the coalition’s bombing of hospitals.

The Yemen Relief and Reconstruction Foundation has only been able to send 500 COVID-19 tests to the key port of Hodeidah so far.

“They don’t have the ability to test,” Jumaan said. “They’ve not been able to upgrade or fix the equipment they have in the hospitals in five years because of the blockade. There are no ventilators.”

Other aid groups that have been critical of the Saudi-led coalition, such as Oxfam International, have increasingly focused on the worsening Houthi aid restrictions as they negotiate with the rebels for more access to Yemen’s north.

The Houthis had already agreed to suspend a proposed 2% international aid tax for fiscal year 2020 after negotiations with international donors. However, they have increasingly impeded access to NGO workers from surveilling key programs and have bureaucratically held up approval applications for several projects while placing limits on whom humanitarian groups can procure supplies from.

The USAID spokesperson emphasized that USAID had “been planning this suspension with our partners for many weeks” and that they would “resume operations as quickly as possible” once the Houthis eased the aid restrictions.

“USAID took a much more far-reaching approach to this and basically said we’re not going to send funds to programs even if they can be delivered properly in the north, except for a very narrow set of circumstances,” Paul said. “Now we find ourselves in a really unusual situation where it was unusually problematic humanitarian negotiations from the beginning​. Then when you see COVID-19 coming, there’s no sense this has caused a fundamental rethink of this [USAID] strategy.”

As the Trump administration cuts assistance and the Houthis refuse to lift their restrictions, humanitarian groups and antiwar activists are also mired in a tactical debate over whether to lobby Congress on taking another stab at passing a second Yemen war powers resolution to end US support for the Saudi-led coalition — an initiative President Trump vetoed last year.

Some antiwar groups are pushing lawmakers to reintroduce the legislation as a resolution Trump could not veto, formally known as a concurrent resolution.

House Speaker Nancy Pelosi, D-Calif., took a similar gambit with an Iran war powers resolution earlier this year. But the Senate parliamentarian ruled that a concurrent resolution did not qualify for an expedited floor vote. This allowed Senate Majority Leader Mitch McConnell, R-Ky., to stonewall it and forced Pelosi to pass a joint resolution, which Trump also vetoed.

Still, some antiwar groups hope that more war powers votes in the House would bolster the case for lawmakers to file a war powers lawsuit against Trump over Yemen and Iran.

“Congress must affirm — as House Democratic leadership asserted for Iran — that under the War Powers Resolution, the president must end unconstitutional US participation if the Congress so directs by concurrent resolution,” said Erik Sperling, the executive director of Just Foreign Policy. “With the parties discussing a cease-fire and reports that the Saudis are looking for an exit, another bipartisan vote could be the catalyst that finally brings the conflict to a close.”