Activists and humanitarian organizations want Congress to include COVID-19 aid for Yemen in the next coronavirus relief bill as skeptical senators question the Trump administration’s recent restrictions on assistance for Houthi-held areas. 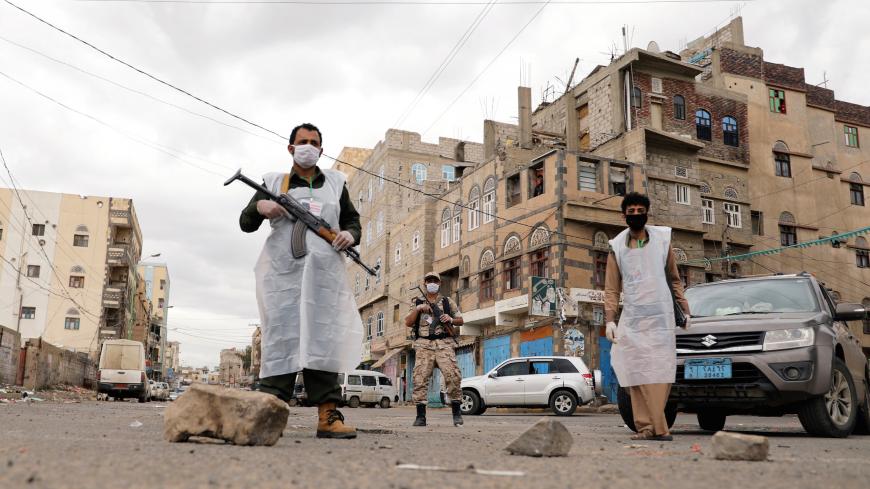 Security men wearing protective masks stand on a street during a 24-hour curfew amid concerns about the spread of the coronavirus disease in Sanaa, Yemen, May 6, 2020. - REUTERS/Khaled Abdullah

Congress is hammering out its next coronavirus relief bill, and anti-war activists and humanitarian organizations want lawmakers to include funding to help Yemen cope with the COVID-19 pandemic in the face of the Donald Trump administration’s recent aid restrictions on the Houthi rebels and the World Health Organization (WHO). The push from Yemen advocates comes as a group of skeptical senators pressed the Trump administration for answers over its new Yemen aid policy Tuesday.

The Friends Committee on National Legislation, the Yemen Relief and Reconstruction Foundation and the Yemeni Alliance Committee are preparing a letter to key congressional leaders that they hope will form the opening salvo in the new push to include Yemen in Congress’ next coronavirus stimulus package.

“It is unconscionable for the United States to cut off humanitarian aid to Yemen in the middle of the COVID-19 pandemic — especially after supporting the bombing of Yemeni hospitals,” said Hassan El-Tayyab, the legislative manager for Middle East Policy at the Friends Committee on National Legislation. “Regardless of Houthi activity, a global pandemic is not the time for a blanket suspension of aid to Yemen. Congress has the power to take immediate action and it’s clear that Yemen can’t wait any longer as it teeters on the edge of catastrophe.”

The letter, seen by Al-Monitor, is addressed to the top Democrats and Republicans on the foreign affairs, appropriations and oversight committees in both chambers. It calls on Congress “to do everything in its power to ensure that all congressionally appropriated USAID funding be released” while highlighting the need for “emergency medical assistance” in Yemen.

House Democrats released their latest coronavirus relief bill Tuesday, but it does not currently include COVID-19 aid for Yemen or any other country. It does, however, include $2 million for the State Department inspector general to conduct oversight of the Trump administration’s COVID-19 foreign aid assistance across the globe.

Separately on Tuesday, Sen. Ben Cardin, D-Md., led five of his colleagues in a letter pushing Secretary of State Mike Pompeo and Acting USAID Administrator John Basra on the Yemen aid restrictions. Sen. Todd Young of Indiana was the only Republican to sign onto the letter alongside Sens. Patrick Leahy of Vermont and Jack Reed of Rhode Island — the top Democrats on the Appropriations and Armed Services committees. Sens. Bernie Sanders, I-Vt., and Chris Coons, D-Del., also signed onto the letter.

“In Yemen, COVID-19 will worsen an already dire humanitarian situation: 80% of the population is in need of humanitarian assistance, the majority of whom are women and children; two-thirds of the country lacks adequate access to clean water and sanitation; millions are living on the brink of starvation; nearly 20 million people lack access to adequate healthcare; and cholera, dengue and other preventable diseases are rife,” wrote the senators. “These factors create an environment conducive to the severe and rapid spread of the COVID-19 virus, threatening countless civilian lives.”

Congress appropriated $400 million in Yemen stabilization aid for this fiscal year. However, the Trump administration announced in March that it would end most aid in Houthi-controlled northern Yemen, where the vast majority of the population lives, citing the rebels’ restrictions on foreign assistance. The new policy resulted in a $73 million Yemen aid cut, which was later exacerbated by Trump’s refusal to continue US funding for the WHO.

The Trump administration announced $500,000 in COVID-19 aid for Yemen earlier this month, but that accounts for less than 1% of the $1.3 billion that the Yemen Relief and Reconstruction Foundation estimates will be needed to cope with the pandemic. Only 70 COVID-19 cases and 12 deaths have been recorded in Yemen, but the real number is likely much higher. The Saudi-led coalition fighting the Houthis has accused the rebels of deliberately underreporting the number of COVID-19 cases in their territory.

And while the Trump administration announced $225 million in emergency food aid for Yemen last week, humanitarian organizations highlight the urgent need for funding to bolster Yemen’s embattled health sector in the face of the pandemic. (After the initial US funding cut, the World Food Program cut its operations throughout Houthi-controlled territory in half.)

“There are also concerns that this aid will not be evenly distributed to the Houthi-controlled territory where roughly 70% of the population lives,” states the Friends Committee on National Legislation letter. “Millions more are needed, in particular, for emergency stocks of personal protective equipment, ventilators, ICU beds and other vital supplies for Yemen’s’ battered health care system.”

Although humanitarian organizations continue to push the Houthis over the access issue, the rebels have loosened some significant restrictions since the beginning of the year. That includes scrapping a plan to instate a 2% tax on foreign aid and allowing the use of biometric data to monitor for fraud. Still, the Trump administration insists that the rebels need to go further by increasing approvals for travel permits to deliver assistance while allowing aid agencies to operate independently.