The residents of Aleppo are fleeing the regime’s shelling toward the north, mainly to Sheikh Maksoud neighborhood, where the local council tries its best to meet their needs. 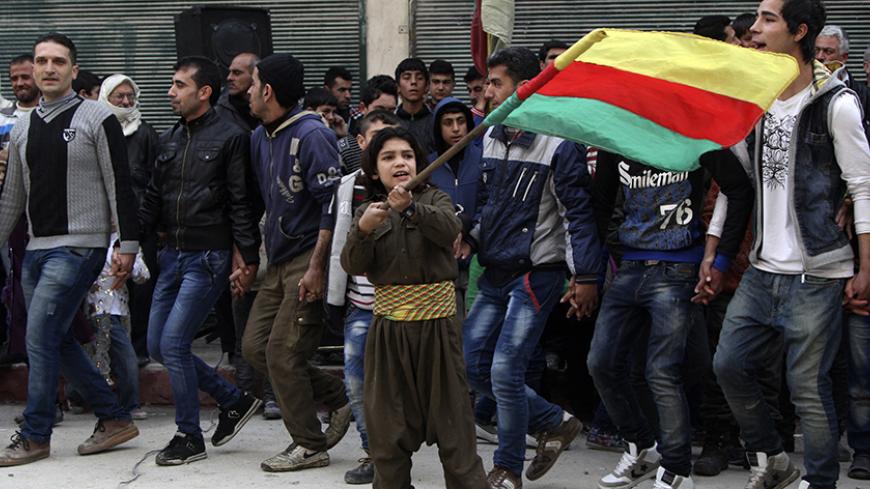 A Kurdish boy waves a Kurdish flag during celebrations after it was reported that Kurdish forces took control of the Syrian town of Kobani, in the Sheikh Maksoud neighborhood of Aleppo, Jan. 27, 2015. - REUTERS/Hosam Katan

ALEPPO, Syria — Dozens of inhabitants of the Sheikh Maksoud neighborhood queued for bread that is distributed to help the displaced and poor. To avoid the rush, Fatima headed to the local council’s office during the early morning hours to pick up some bread and other products. While she waited her turn, Fatima told Al-Monitor her story: “I could no longer bear to risk my children’s lives. We could hear the sounds of barrels and missiles coming down on our houses in al-Maysar neighborhood almost daily. After several attempts, my husband agreed to leave the house and settle in Sheikh Maksoud.”

Sheikh Maksoud, located in the northwest of Aleppo, is considered a safe haven for the displaced. Arab and Kurdish families alike go there to escape the shelling in the eastern neighborhoods under the opposition’s grip. Hundreds of families from Kobani sought shelter there in the wake of the battles between the Islamic State and the Kurdish forces.

“We feel relatively safe here,” Fatima said. “We hear the sounds of explosions from afar, but the neighborhood does not get shelled.”

Sheikh Maksoud is currently under the administration of the People’s Protection Units (YPG), with weak participation by the opposition forces. Although it has been outside the control of the regime since April 2013, no shelling reaches it.

Fatima took Al-Monitor to her humble abode, which includes two small rooms and a kitchen that is empty except for some utensils and a kerosene stove. While preparing food for her children, she said, “Thank God one of our relatives gave us this house, but I hope that we will be able to return to our house and find it in good shape.”

Most of the inhabitants of the neighborhood are displaced and poor. There is complete power outage, and streets are filled with holes and puddles. The activity of the relief committees is limited compared to the large number of people in need. Fatima said, “A month ago, we received one cleaning basket. Fuel prices are very high, and we have to cut wood for heat. But, thank God, we are in a much better state than some families that can’t find anyone to support them.”

The local council in the neighborhood handles the civil administration of the area, and its chairman, Imad Daoud, brags that his council is made up of representatives of all sects and races — Muslims, Christians, Arabs and Kurds.

Leafing through the residential records, he told Al-Monitor, “Around 90,000 people from diverse religions and races live in Sheikh Maksoud. More than half of the residents are displaced people seeking security. Our doors are open to everyone.”

“Around two months ago, the population in the neighborhood reached 120,000, but recently, many were displaced outside Aleppo to flee the blockade,” Daoud added.

The council handles the distribution of humanitarian aid to refugees, and dozens of poor people regularly return to the council’s office.

While Daoud addresses the affairs of some of them, he said, “Most of the neighborhood residents do not have an income to support their livelihood, as they lost their jobs. We receive from the organizations, on a monthly basis, 1,200 food rations and another 1,200 containers of cleaning detergents to be distributed to the displaced. But these cannot meet the huge needs.”

He added, “The residents need additional funding to pay fees for generators. Power has been cut for three years now, after the Shaqif power plant, which is a small industrial area in Aleppo, was shelled by the air force. We are facing difficulties in supplying an alternative power line.”

Sheikh Maksoud boasts an important location at a high altitude. Most neighborhoods in Aleppo and its fortress can be seen from the rooftops. Not far from the council’s office, a group of men watched a helicopter drop barrel bombs on the opposition neighborhoods, trying to guess from the smoke where the shells were falling.

“God help us. Things can’t go on like this,” one of them said.

Syrians have grown accustomed to the constant search for a safe haven. The Kurdish regions might be among their best options. However, they might need to explore others, given the possible blockade on Aleppo and the deteriorating relations between the YPG and the regime, against the backdrop of the first clashes between both parties on Dec. 17, 2014, in Hasakah — considering that they were partners in ruling Aleppo.