Shelling of Aleppo neighborhood threatens to stir up Arab-Kurdish strife 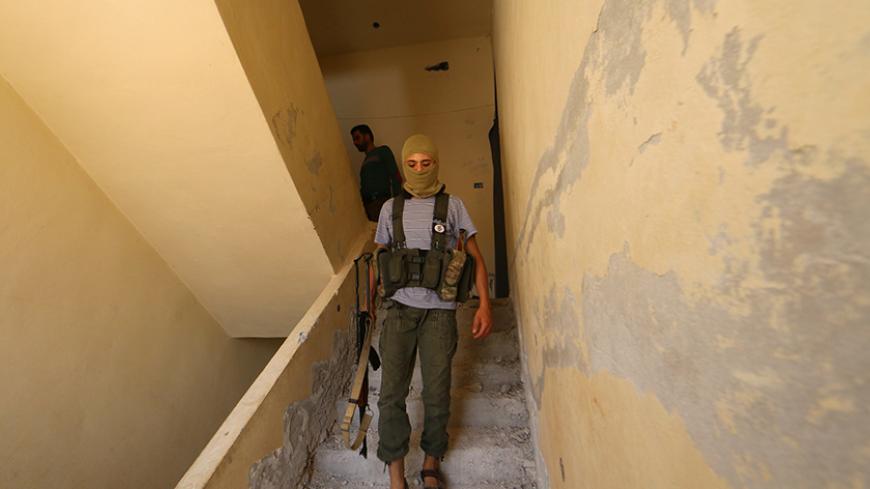 A Jabhat al-Nusra fighter walks with his weapon inside a building in the Sheikh Maksoud neighborhood of Aleppo, Syria, Aug. 3, 2015. - REUTERS/Abdalrhman Ismail

Since February, the Syrian armed opposition has been shelling Aleppo’s Kurdish Sheikh Maksoud neighborhood, where the Kurdish People’s Protection Units (YPG) and about 25 armed opposition factions have been fighting.

The opposition is using locally made improvised weapons — such as the Hell cannon, Hamim missiles and mortars, in addition to other heavy weapons — against civilians. Shelling the neighborhood, where nearly 40,000 people reside, is a violation of the Syrian truce reached after the UN Security Council unanimously voted in favor of a cease-fire. Nidal Hannan, a journalist residing in the neighborhood, told Al-Monitor that April 5 was one of the deadliest days, as “the shelling resulted in the death of dozens of civilians.”

Hannan denounced the Syrian political opposition’s silence on the Sheikh Maksoud incidents. A number of Kurdish and Syrian journalists and activists, including Hannan, issued a statement April 9 calling on international human rights organizations to take quick and responsible action to end the shellings, which “rise to the level of war crimes.” The statement also called for countering the actions of the armed factions, “which misrepresent the Syrian people’s aspiration for freedom, dignity and human rights, and [harm] the principle of coexistence between Kurds and Arabs.”

Human Rights Watch issued a report April 12 about the attacks against civilians.

The armed opposition, represented by Fastaqim Union (also known as Fatah Halab), blamed the increased attacks on the YPG, which it accused of opening a passageway to link the Sheikh Maksoud neighborhood with regime-controlled areas. But Imad Daoud, chairman of the civil administration in Sheikh Maksoud, denied any agreement between Kurdish fighters and the Syrian regime, saying, “The said passageway was opened in coordination between the Kurdish Red Crescent and the Syrian Red Crescent to meet the needs of civilians and help the wounded and sick.”

Ward Furati, a member of Fastaqim Union’s political bureau, told Al-Monitor that what happened was due to the Democratic Union Party’s (PYD) control over the neighborhood. He accused the PYD of using the Russian intervention against the Syrian revolution, and coordinating with the Syrian regime to take over “liberated areas."

He said the battles began at a time when hostilities between the two parties were supposed to cease. Furati said Fastaqim Union issued a statement March 3 calling on the YPG to stop targeting civilians on the main road connecting the opposition-controlled areas to Aleppo’s northern countryside. The statement also called for “putting an end to the use of heavy artillery and rockets, which have killed dozens of civilians.”

Daoud, the neighborhood administrator, told Al-Monitor the armed opposition factions are blaming the PYD as a ruse to avoid admitting they have intentionally bombarded civilians. He said the attacks, which killed more than 100 civilians and injured around 700 others, were designed to implement regional and international agendas; he was referring to Turkey’s support for the armed factions against Syrian President Bashar al-Assad.

A video posted online showed the Syrian Turkmen Brigades shelling the neighborhood with rockets bearing messages in Turkish, saying the attack was conducted to avenge the victims of Ankara and Istanbul.

According to Daoud, opposition factions, which deny attacking civilians, tried to break into the neighborhood from five different points and failed. The civilians, he noted, are situated about 300 meters (328 yards) away from the YPG’s military positions.

On April 7, Jaish al-Islam admitted using prohibited weapons when targeting Sheikh Maksoud. UN Secretary-General Ban Ki-moon subsequently called for an investigation into reports of the use of chemicals.

Furati told Al-Monitor that a group affiliated with Jaish al-Islam had used Grad multiple-fire, truck-mounted rocket launchers, saying, “Grad rockets are not internationally prohibited, but the FSA [Free Syrian Army] leaders in Aleppo banned their use and the use of artillery in operations against Sheikh Maksoud to ensure the safety of civilians.”

The group Imam Bukhari Jamaat, affiliated with Jaish al-Fatah and Jabhat al-Nusra, released a video showing that it targeted the Sheikh Maksoud neighborhood with different weapons.

The conflict in Sheikh Maksoud serves as a warning against increased tension between Kurds and Arabs.

Furati said the FSA does not distinguish between Syrians, as “a good number of Kurdish fighters are within our ranks.” He accused the PYD of paving the way for a separatist project (in reference to the federal system announced by the Kurdish-led autonomous areas of northern Syria in March), saying that the attempt to separate the Kurds from the Syrian people “will not succeed.”

Hannan found it strange that armed factions would attempt to hide the truth of targeting civilians and limiting the conflict to the Kurdish party, even as the factions target a Kurdish-majority neighborhood.

On April 9, the factions issued a statement, which they attributed to the FSA, calling for “distancing and moving civilians out of the neighborhood into safe places and bringing them back after the military operations are over.”

Hannan, however, said the Kurds rejected the idea, seeing it as an attempt to force Kurdish civilians out of the neighborhood.

Daoud described the statement as a war crime and ethnic cleansing against the Kurds. He said all the neighborhood’s residents, be they Kurds, Arabs, Turkmens or Christians, have rejected the statement, which stirs up strife between the Kurds and Arabs.

Furati said that the statement came in response to calls made by Sheikh Maksoud’s residents, who are “trapped by the PYD.”

An Arab resident of the neighborhood told Al-Monitor on condition of anonymity that the residents "do not trust a party that calls for distancing them while it is the one bombarding them.” He called on the parties to the conflict not to involve civilians.