Arms shipment to Lebanon to arrive in April

French Foreign Minister Laurent Fabius has announced that the first arms shipment of the Saudi grant, which has been stalled for more than year, will arrive to Lebanon on April 1. 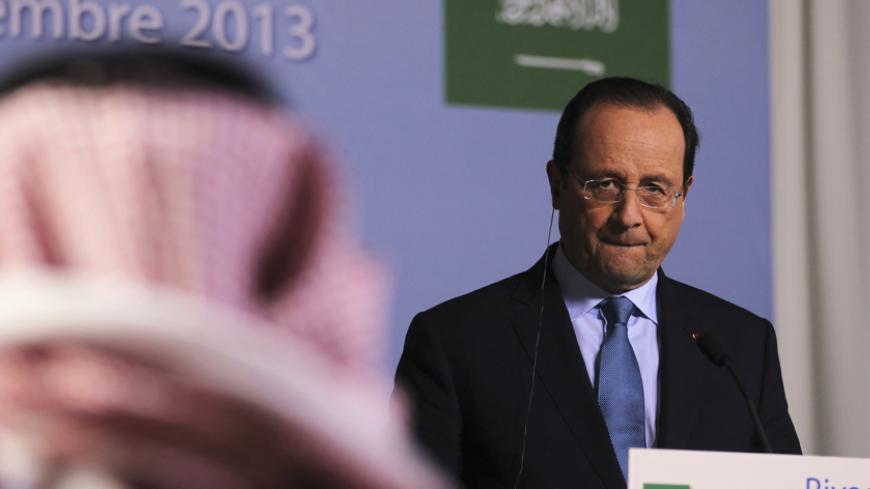 French Foreign Minister Laurent Fabius declared that the first shipment of arms to the Lebanese army as part of the Saudi grant will arrive on April 1 — April Fool's Day — continuing the joke on Lebanon.

The Saudi grant, which was announced on Dec. 29, 2013, is now more than 400 days old, and the senior French official chose the only day regarded by both the Lebanese and the French as a joke to implement it.

A Lebanese government source confirmed that the Saudi grant to provide the Lebanese army with French weapons and military equipment worth $3 billion has been at a standstill since its announcement. He also believes that the situation will drag on for a long time to come.

The source, who spoke with Al-Monitor on condition of anonymity, said that this deal has been riddled with political, legal, administrative and operational challenges from the very moment it was declared — and this was done unilaterally, in conflict with the usual formal norms and standards in Lebanon.

In fact, former President Michel Suleiman announced it at a press conference in the absence of any of the concerned parties, Saudi or French. It was in direct conflict with the Lebanese Constitution, according to which the executive is vested in the Cabinet alone, as the only party with the authority to accept any foreign donation offered to the Lebanese state.

After a period, the issue was referred to the government to be discussed in one of its sessions, but before long it was withdrawn from the dialogue table. The government source confirmed to Al-Monitor that the issue no longer exists within the Cabinet’s documents.

It has been said that Lebanon has nothing to do with the details of implementing the deal, as it is a business issue between the donor, Riyadh, and the seller, which is Paris. Lebanon’s role would be limited to providing a list of weapons and military equipment it deems needed by its armed forces. It has also been reported that the deal will serve as a launching pad for a three-way treaty between Saudi Arabia, France and Lebanon.

However, rumors about the deal were quick to spread. It has been reported that the French company ODAS, which was handling the negotiations between Saudi Arabia and France, asked for $150 million in commission. The negotiations went on for months. Meanwhile, the Lebanese side has been meeting the required rules and regulations, but France has repeatedly amended them, as confirmed by the source to Al-Monitor. These amendments were related to the conduct of negotiations between Riyadh and Paris on this issue.

Following about eight months of stalling, the deal was declared to be on the verge of completion with the visit of then-Saudi crown prince and current King Salman bin Abdul-Aziz Al Saud to Paris in early September 2014. According to the source, that day, Beirut was informed that Paris and Riyadh have overcome the final obstacles, which boiled down to three items in the regulations of the required weapons. The Lebanese army had suggested it receive Turill aircrafts, marine fighting systems and encrypted network communications, which were first objected to by the French side, but later on agreed upon.

Beirut was also informed that day, according to the same source, that the final signing, based on the outcome of Salman’s visit to Paris, was supposed to be made within 30 days as of that date. Indeed, on Nov. 3, the final signing of the grant was announced and it was reported that the deal would immediately enter into force.

It has been said that there was an item providing for supplying the Lebanese army with three large cruisers that Lebanon does not need nor is able to run or maintain. This item was made only to ensure a commission through the purchase of these cruisers from an affiliated agent.

The government source did not reveal further information on the issue but confirmed that the Lebanese government kept silent and agreed to the item, in the hope that the army would be provided with the rest of the necessary arms and ammunition. The government official confirmed that afterward, Lebanon started signing the documents. He said that one of the Lebanese officials had spent hours signing 420 papers that constituted the agreement and its multiple copies.

The same official then traveled to Riyadh to follow up on the implementation, only to be surprised by another party joining the negotiations. In the previous meetings between the Saudis and the Lebanese, Riyadh was represented by Khalid al-Tuwaijri, secretary-general of the Royal Court of Saudi Arabia under King Abdullah bin Abdul-Aziz Al Saud. However, following the tripartite agreement, the Lebanese official was surprised by the presence of representatives from the Saudi Ministry of Finance, alongside Tuwaijri, during the meetings.

Tuwaijri explained to the Lebanese delegation that the Saudi grant is no longer a personal one from King Abdullah, but an official donation from Saudi Arabia to Lebanon.

Many weeks have gone by without any progress, and further questions and ambiguities have arisen, including ​the death of King Abdullah on Jan. 23, the ousting of Tuwaijri from his influential post in the House of Saud and the major shifts in the decision-making circles in Riyadh.

Sources in Beirut are left to wonder: Did the $3 billion Saudi grant die with King Abdullah or will it be reinstated under the new Saudi rule but in a new form? These and other ambiguities need to be addressed, while the Lebanese army remains in dire need of such arms in its war against terrorism.