Recent decisions and a series of measures adopted by Saudi Arabia all point to a clear change in the way the kingdom will be handling relations with Lebanon. 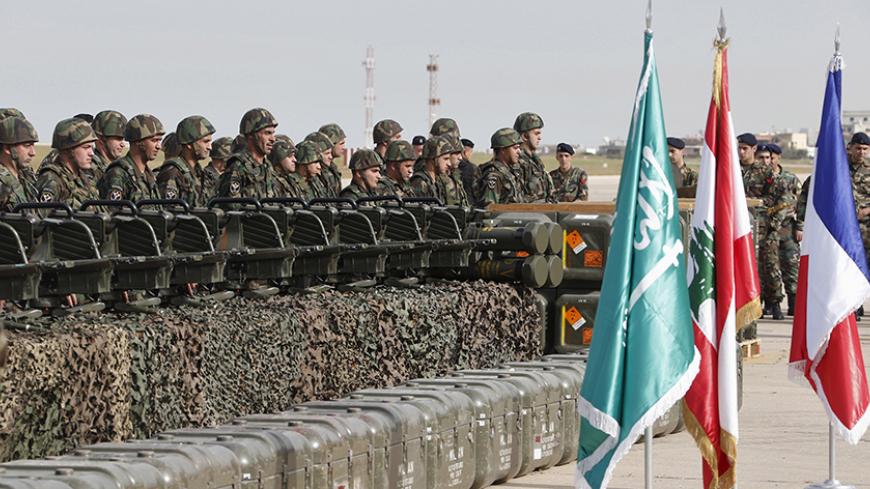 Lebanese army soldiers stand next to displayed weapons they received during a ceremony at the Beirut air base, April 20, 2015. - REUTERS/Mohamed Azakir

BEIRUT — When King Salman bin Abdul-Aziz Al Saud came to power in Saudi Arabia on Jan. 23, he made changes to the government and princely structure that were described as the biggest in Saudi history. This has raised questions on how Saudi internal developments will impact the regional landscape and Saudi foreign ties.

Observers and analysts agree that only time will tell whether Saudi Arabia’s foreign policy, particularly with the regional countries, will be affected by these changes. The first indicator portending a change in foreign policy was seen on April 29, when Salman made new and highly significant appointments that exempted Prince Muqrin bin Abdul-Aziz from the posts of crown prince and deputy prime minister, to which he was appointed in January.

Senior diplomatic sources spoke to Al-Monitor on condition of anonymity and revealed that a series of Saudi decisions indicates a change in the Saudi way of dealing with Lebanon. First and foremost is Salman’s royal decree demanding the Saudi defense minister inform the Lebanese authorities that the $3 billion grant Saudi Arabia pledged to donate in December 2013 for upgrades to the Lebanese army, under the rule of the late King Abdullah, was canceled.

According to the same sources, Lebanon was told that this military donation was a personal gift from Abdullah’s own money and is not included or even mentioned in the Saudi Defense Ministry’s documents, which was later notified about it for follow-up protocols. The grant was approved in coordination between Khalid al-Tuwaijri, former head of the Royal Court, who is currently under house arrest and is being questioned since June 20, about financial transfers that were made under the rule of the late King Abdullah and three of his sons, in the time of former Lebanese President Michel Suleiman. The sources added that the Saudi authorities expect any inquiry about the donation to take place with Abdullah’s family. The source also said Salman requested that French President Francois Hollande halt all steps related to the donation, as it was not considered part of the Saudi Ministry of Economy’s expenses.

The sources told Al-Monitor that the Lebanese authorities are keeping this issue under wraps in light of the ongoing communication between the various parties and until the end of the investigation.

According to exclusive information the same sources shared with Al-Monitor, Saudi Arabia has taken another dangerous step. The Saudi authorities demanded that more than 300 Lebanese Shiite and Christian families leave the kingdom by the end of this year, after they were informed that their residence permits will not be renewed. These same families have been in Saudi Arabia for more than 10 years.

The sources spoke of another indicator showing the Saudi policy toward Lebanon has changed.

In light of what WikiLeaks said about the Saudi funding of Lebanese political and media parties, and in light of the growing funding requests made to Ali Awad Asiri, the Saudi ambassador to Lebanon, Asiri requested guidance from his country on how to deal with the situation. The Saudi answer was for Asiri to leave his post in Lebanon and return to Saudi Arabia and that the mission’s presidency be handed over to the charge d'affaires at the embassy until a new ambassador is appointed.

The sources linked the decision to transfer Asiri to the financial issue, knowing that his stay had already been extended as his term was supposed to end in August 2014. Back then, media sources quoting Saudi authorities said the reason behind the extension was the absence of a president to accept the new ambassador’s credentials. Moreover, the kingdom was keen to avoid any vacuum at the head of its mission in Lebanon.

The same sources wondered about what changed for Saudi Arabia to limit its diplomatic representation in Beirut to the charge d'affaires, while it refused to do so a year ago — especially when Lebanon’s presidential seat is still vacant and, therefore, the credentials cannot be accepted by the head of the Lebanese state.

These steps — should Saudi Arabia decide to implement them — will most likely have a significant negative impact on Lebanon morally and financially, in terms of armament and support to the Lebanese army, which is engaged in fierce battles against terrorism, and economically, in terms of the deportation of hundreds of families who are looking for a living abroad. The impact is also political, should Saudi Arabia continue to reduce its diplomatic representation in Beirut. The sources viewed all of this as a strong message the kingdom intends to deliver to the Lebanese government and political parties: “Saudi Arabia holds more than one pressure card to be used in the Lebanese presidential elections.”