Israel fears rapprochement between US, Iran

Some officials in Egypt, Saudi Arabia and Israel fear that the United States aspires to replace its traditional Middle East alliance with a moderate Iran. 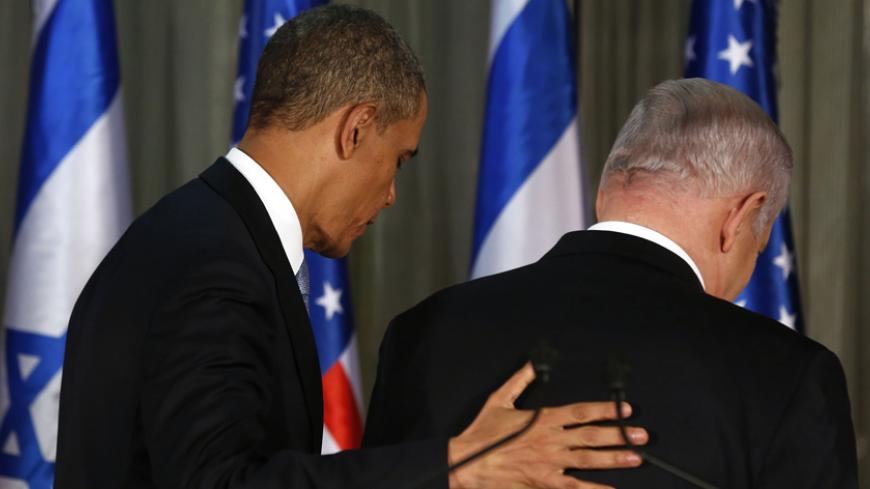 US President Barack Obama and Israel's Prime Minister Benjamin Netanyahu walk away after a news conference at the prime minister's residence in Jerusalem, March 20, 2013. - REUTERS/Larry Downing

The public confrontation between the Barack Obama administration and the Benjamin Netanyahu government, which includes also a personal conflict between Obama and Netanyahu, has two sides: a revealed facet and a hidden facet.

The revealed, publicized side is constantly in our face. Hardly a day goes by in which a new red line is not crossed. On Feb. 18, White House spokesman Josh Earnest said in a media briefing that his country still confers with Israel regarding the Iran nuclear talks but is concerned that leaked information could undermine the chances for success of the talks. He said, "There's no question that some of the things that the Israelis have said in characterizing our negotiating position have not been accurate." Earnest added that the United States would like to guarantee that information discussed in the talks will not be taken out of context or distorted.

Nothing like this has happened here before in the new era. “The only incident I can remember that bears similarity to this is the Pollard affair,” I was told this week by a high-ranking Israeli security source. “But then they had caught a spy from Israel in their holy of holies, so there was justification for the ruckus. Now, at such a sensitive juncture, they are openly showing that they don’t trust Israel. In fact, they are removing Israel from their deluxe guest suite in which it resided as a guest of honor for generations, and doing this in front of the cameras. Astonishing doesn’t begin to describe it.”

Behind the scenes, another more clandestine confrontation is raging. The United States is facing off against what were called (until very recently) “America’s allies in the Middle East,” namely Israel, Egypt, Saudi Arabia and other countries. This confrontation is quiet, restrained and perhaps only implicit, but its roots are combustible and contain potential for explosion. Many sources in the countries listed above feel that the United States is gearing up for a process of replacing its allies in the Middle East. No more Saudi Arabia, Egypt and Israel. Instead, Iran is supposed to replace them.

According to this conspiracy theory, Obama dreams about a nuclear arrangement with Iran that will lead to a booming, historic, geopolitical change in the entire region. Iran will shed its earlier identity and turn westward.

According to this theory (which is also popular in Middle East intelligence organizations), the Americans hope to make use of Iran to stabilize the great conflagration that has taken hold of the Middle East in recent years. The theory goes like this: Only Iran is capable of crushing the Islamic State (IS) within a short time period. Only Iran can rein in Hezbollah, can calm the waters in Yemen, can restore order to the entire region. A historic agreement with Iran (according to this theory) would be the first stage in a comprehensive regional process in which Iran would morph from an ostracized, pariah (and terror) state, into the great axis of stability.

The Saudis, the Egyptians and some of the Israelis say that Obama wants to bring Iran back to center stage. He wants to usher it into the guest suite — that same suite from which the Israelis were ejected.

The Americans dismiss this outright. A high-placed American official I spoke to this week tried not to burst out in laughter at this conspiracy theory. “The truth is that we hear this from many Israeli sources,” he admitted. “It is completely unfounded, totally imaginary. What is serious here is the atmosphere that allows veteran allies like Israel and Saudi to even conceive of being replaced by Iran. No doubt about it, the Middle East is going crazy.”

Another American source close to the administration, whom I spoke to last week behind closed doors, reported a discussion held a few weeks ago by National Security Adviser Susan Rice. The Iran question came up for discussion, and participants considered the question “how will Iran behave if and when a nuclear agreement is reached with the West.” One of the attendees went on imagining and estimating that such an agreement could considerably moderate Iran and transform it from a terror-disseminating, subversive element to a strengthening, stabilizing one.

However, that speaker remained a tiny minority in the room. Most of the participants were united in the view that "a nuclear agreement with Iran is only likely to radicalize it and make it even more belligerent." The explanation is as follows: A nuclear agreement would suspend the nuclear dreams of the ayatollahs, and along with it the decisive regional hegemony Iran was aspiring to achieve. Under such circumstances, Iran would be forced to preserve its status as a regional power by doing what it has been doing for the last 30 years: strengthening Hezbollah, continuing to try to take control of power centers, keeping the heat on the Sunnis, building terror footholds and continuing the siege on Israel.

According to the same American source, at the summary stage of the discussion, even Rice herself joined those who felt that a nuclear agreement between the powers and Iran is not likely to moderate Iran, but do just the opposite.

So who is right? Where is the truth? Like in any conspiracy theory, the truth is in the middle. The Americans aren’t trying to replace Saudi Arabia with Iran. The Americans are not trying to throw Israel under the bus, but they would be very happy if Netanyahu would disappear quickly from the public stage and remain as far away from them as possible.

The Americans are trying to carry out a three-stage process: first, to reach a nuclear deal that would freeze the existing situation and leave Iran one year away from the bomb. According to the Americans, this was what was decided in advance with Israel, and Israel is now flagrantly violating the understandings, manipulating the data and distorting reality.

In the second stage, after the immediate nuclear danger passes, the Americans hope to use Iran to calm and stabilize the region as much as possible. They know that this may be somewhat naive, but they hope that the dissipation of the great tension formed between the various sides of the nuclear conundrum will allow the Iranians to descend from the various trees they have climbed. That is the reason they continue to insist on gradual removal of sanctions. They want to encourage the Iranians to improve their behavior in additional dimensions, beyond the nuclear issue.

The third stage is far-flung, utopian and dependent on numerous variables. That is the stage when the Iranian nation is supposed to replace at some point the rule of the ayatollahs and return to the bosom of the modern world. Without ayatollahs, there will be no nuclear problem.

By the way, there are quite a few security officials even in Israel who feel that the problem in Iran is not nuclearization but Iranian Supreme Leader Ayatollah Ali Khamenei and the gang of several dozen fanatics surrounding him. When they are gone, they say, everything will work out. Well, meanwhile, they are still here.