The case for releasing Pollard

US authorities deny any linkage between the Iran deal and the fact that it won't oppose the release of convicted spy Jonathan Pollard later this year. 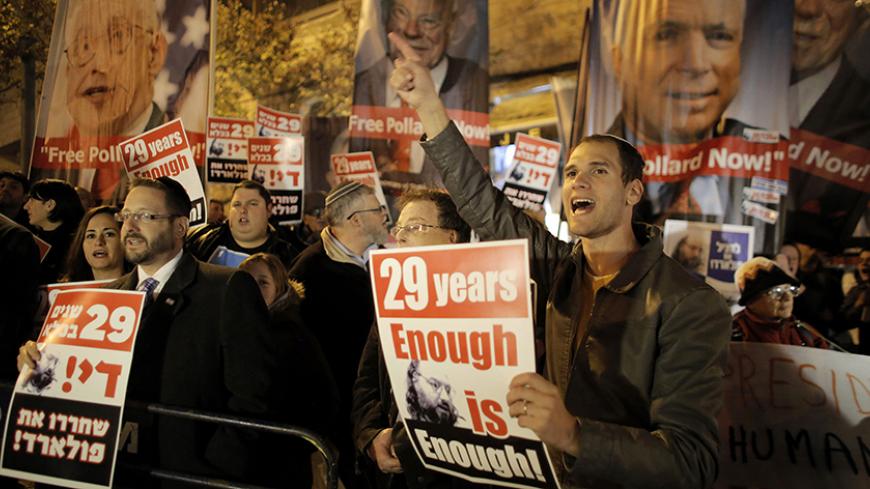 Israelis hold placards during a protest calling for the release of Jonathan Pollard from a US prison, outside US Secretary of State John Kerry's hotel in Jerusalem, Jan. 2, 2014. - REUTERS/Ammar Awad

The Jonathan Pollard affair would never have come about if not for the personal ambition and internecine ego wars between the chiefs of the Israeli espionage system in the 1980s.

It all began with Rafi Eitan, one of Israel’s greatest spies, who was responsible for (among other exploits) the capture of Nazi arch-murderer Adolf Eichmann and for bringing him to Israel to stand trial in 1960. In the beginning of the 1980s, Eitan belonged to the inner circles surrounding Defense Minister Ariel Sharon. His life dream was to be appointed head of the Mossad. He was not granted his wish, but Sharon tried to compensate him by appointing him to head the Bureau of Scientific Relations (Lekem) in 1981. This bureau, associated with the Defense Ministry, was a relatively minor, clandestine Israeli intelligence organization tasked with collecting Western technology to be used by Israeli defense projects. From this position, Eitan wanted to prove his mettle to those who had denied him the Mossad and show them that they’d made a bad mistake. He decided that he would come up with material that they had never seen, even in their wildest dreams. That goal spurred him to employ a spy in the very hub of the US intelligence establishment.

Jonathan Pollard was no run-of-the-mill spy, but a brilliant, ambitious American navy intelligence officer with a photographic memory and great love for the State of Israel. Pollard offered his services to the Israelis, who jumped at the opportunity.

Employing Pollard on US territory was an act of madness. Nevertheless, the quality of the material that Pollard brought in forced Israel’s leaders to receive it, though with trembling hands. “No Israeli leader could have turned his back on such material,” one of the affair’s old-timers told Al-Monitor this week on condition of anonymity. “From our perspective, it was not material that could harm the United States, but it could be of great use to Israel. We viewed ourselves as a faithful American ally and simply ‘helped’ the Americans to help us, without their knowledge. We cut corners,” he admitted. “We simply got carried away; we were dazzled by what we saw.”

In the first journalist interview that Pollard granted me from the Butner Federal Correctional Institution in 1997, he shared how Israel had betrayed him and turned him in. He claimed that Israel had given the Americans hundreds of documents that Pollard had collected and given to his handler, then-Brig. Gen. Aviam Sela of the Israeli air force, stationed in the United States at the time, including a personal written account by Sela. Pollard then said that the Americans could never have been able to incriminate him without Israel’s cooperation.

Pollard even cited in relation to the affair Prime Minister Benjamin Netanyahu, who served as Israel’s ambassador to the United Nations at the time Pollard was caught and as prime minister when the 1997 interview was conducted. “Don’t forget that Netanyahu was Israel’s ambassador to the UN when I operated. And don’t forget that [then-Minister of Defense] Moshe Arens was very involved in my activities. He knew everything, he approved everything. Arens’ fingerprints are all over the operating instructions I received, all the operations, all the orders. And let us not forget that Netanyahu was Arens' poodle. I was told by several people that Netanyahu had a part in the directive to throw me out of the embassy. There is no proof for this. I try to be careful; I am not accusing him now on this issue. But I have no doubt that he is part of the group with tainted hands, and he certainly does not have a clean conscience,” Pollard said.

Eighteen years have passed since that interview, and Pollard is still behind bars. The sentence he is serving is far more severe than those of others who were indicted for similar offenses. At the beginning, the Americans attributed to Pollard the transfer of materials that led to the exposure and killing of American agents in the Soviet Union. This was a false charge, and Pollard’s total innocence was only proven after master spy Aldrich Ames was exposed. That did not change the decision of the American system to bury Pollard in prison for the maximal period, so as to make an example of him.

The Jewish “dual loyalty” issue in the United States is an especially sensitive topic, a tinderbox. The Pollard affair ignited this issue with one swift blow, arousing great concern and fury among the Jewish community’s leaders. This was the reason that the robust American Jewish public avoided taking action on Pollard’s behalf in the first decade of his incarceration. Later on, this reluctance dissipated, and recent years have seen numerous Jewish American activists agitating for his release.

The first time was in the course of the negotiations over the Wye River Memorandum in 1998, when President Bill Clinton agreed to release Pollard as a goodwill gesture but reportedly retracted his promise under pressure from then-CIA Director George Tenet. The second time was last year, when the Americans promised to release Pollard in exchange for Israel’s agreement to release Palestinian prisoners with Israeli citizenship, a move that had always been viewed as taboo by the various Israeli governments. Here, too, the deal exploded at the last minute and Pollard paid the price.

The ultimate question in Israel is: Why have the Americans insisted on Pollard’s continued incarceration for 30 years? Why is he discriminated against regarding the length of his prison sentence, considering that he transferred secret information to America’s ally and not a foreign power? Many people have tried to uncover the answer to this mystery in the 30 years that have since elapsed. “It is simple,” I was told by a high-ranking Israeli intelligence source who spoke on condition of anonymity. “This is about rivalry between espionage organizations. An issue like Pollard needs to be handled strictly between the intelligence organizations themselves. There are clear rules of action for such affairs. Unfortunately, with regard to Pollard, the Mossad does not cooperate and shakes off all responsibility. This drives the Americans crazy.”

The Israeli source addressed the Americans' conviction that Pollard was part of a widespread spy network. In exchange for assisting Pollard, they wanted details about the entire network, not only about him, my source said. “Israel vigorously denied the existence of such a network, but the Americans didn’t believe this for a moment. Over the years, reports were publicized here and there of the exposure of an additional spy who was a member of Pollard’s network, but nothing ever reached operative levels. So the Americans decided that until they received Israel’s real cooperation, including full disclosure of everything that happened and the revelation of all the names involved, they would see to it that Pollard remain behind bars. That is the entire story.”

In November 2015, Pollard will have served 30 years in prison. Under US law at the time of his trial, this completes his life sentence. From that moment, the responsibility for his remaining in prison will fall on the state, not him.

The US Department of Justice has stated that it would not place obstacles in the path of Pollard’s release at the end of 30 years. The Americans forcefully deny that the issue is in any way connected to the nuclear deal with Iran. This denial came on the heels of reports that Pollard’s release is the prize that the US administration intends to place in the lap of wayward Israel as compensation for the controversial nuclear agreement. As stated, the Americans deny this.

Pollard served his time and presumably, he can go. The Israeli public hopes and prays that his anticipated release from prison will finally put an end to this painful saga in which Israel committed every possible mistake and was forced to eat crow in a no-win situation. The belated release consoles no one — not in Israel, not anyone in Pollard’s circle. He already paid the painful price. If Pollard had known in advance that he would be forced to forfeit three decades of his life, the chance to start a family and to be present at the funerals of his parents, he would never have even entertained the idea of offering his services to the State of Israel.