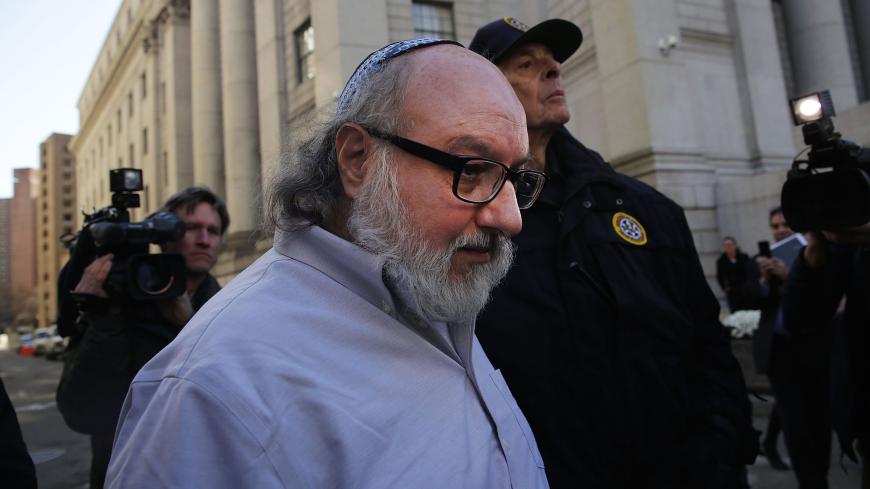 Jonathan Pollard, the former US Navy analyst convicted of spying for Israel, arrived at Ben Gurion Airport together with his wife, Esther, early this morning. Coming out of the airplane, Pollard got on his hands and knees to kiss the tarmac in the Jewish tradition of kissing the ground of the holy land. The Pollard couple arrived aboard a private jet owned by US American billionaire Sheldon Adelson, a major backer of Prime Minister Benjamin Netanyahu.

Awaiting him at the tarmac, Netanyahu said, “Now you can start life anew, with freedom and happiness. Now you are home.” Pollard responded by saying, “We are excited to be home at last. There is no one who is more proud of this country or its leader than we are. We hope to become productive citizens as soon as possible.”

The Office of the Prime Minister posted on Twitter a short clip of Pollard’s arrival at the airport, saying, “Prime Minister Benjamin Netanyahu welcomed Jonathan and Esther Pollard upon their arrival in Israel, early this morning. The Prime Minister was moved to meet them on the tarmac next to the plane where they recited the Shehecheyanu blessing (the traditional Jewish blessing for when something new happens) together. Prime Minister Netanyahu gave Jonathan Pollard an Israeli identity card. The Prime Minister told the Pollards that it is good that they have come home."

Pollard — a Jewish American — was a US Navy intelligence analyst in the mid-1980s when he made contact with an Israeli officer in New York. He then began transferring to Israeli contacts confidential documents and information. Pollard was arrested in 1985 in what became a yearslong thorn in US-Israel relations. Israel had acknowledged partly over the years some of the role it played in the Pollard espionage affair. But it was only in 1998 that Israel admitted having paid Pollard thousands of dollars for the information he supplied.

Since he was sentenced, Israel made several attempts through both official and unofficial channels for Pollard be released, but successive US administrations always refused. He was granted symbolically Israeli citizenship in 1995. In 2002, Netanyahu (who was not prime minister at the time) visited Pollard in prison. Eventually, Pollard was released in 2015 after serving 30 years in prison. After his release, he remained subject to a curfew, had to wear a wrist monitor and was prohibited from traveling abroad. In late November, the US Parole Commission formally lifted Pollard’s parole restrictions, enabling him to immigrate to Israel with his wife. At the time, Prime Minister Netanyahu spoke to Pollard on the phone, expressing the hope that the couple would travel to Israel.

by Ismail BELLAOUALI with Philippe AGRET in Rabat and Marie GIFFARD in Madrid | AFP | Jun 24, 2022
END_OF_DOCUMENT_TOKEN_TO_BE_REPLACED