Pollard and Vanunu: A tale of two spies

While criticizing the restrictions the US has imposed on released spy Jonathan Pollard and attempting to legislate state allocations for him, Israeli politicians ignore their government's restrictions on nuclear spy Mordechai Vanunu. 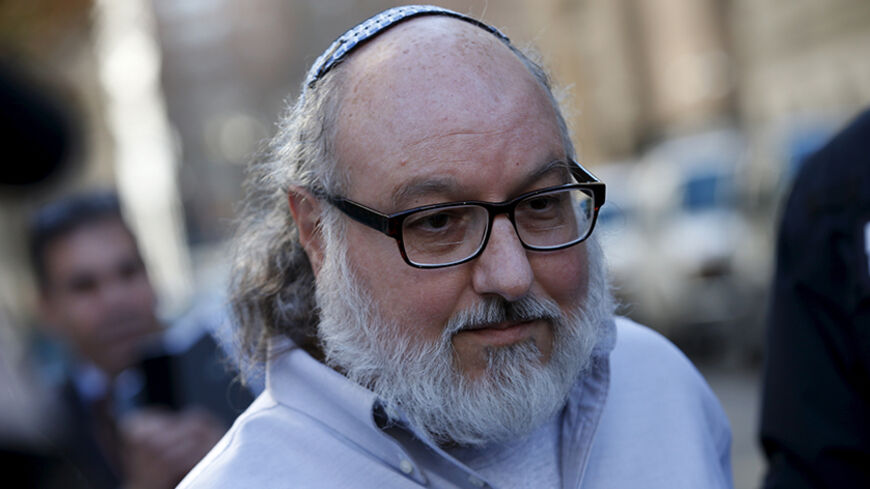 Convicted Israeli spy Jonathan Pollard, who was released from a US federal prison in North Carolina, leaves US District Court in the Manhattan borough of New York, Nov. 20, 2015. - REUTERS/Mike Segar

Jonathan Pollard’s release from a US prison Nov. 20 has not relieved the Israeli public of the affair that has haunted it for the past three decades. Likud Knesset House Committee Chair David Bitan was quick to prepare legislation granting Pollard a monthly state stipend for the rest of his life along with subsidized rent and health care. In a congratulatory letter to the former convict, Zionist Camp member Nahman Shai, head of the Knesset caucus advocating for Pollard, wrote that the “lobby will not rest and not cease.” In fact, he has set a new challenge for the caucus: to lift the restrictions on the Jewish spy that “violate [his] civil rights.” Shai pledged that the caucus would not halt its advocacy until Pollard is allowed to leave the United States for a destination of his choice, “first and foremost, Israel.”

In July, the same Shai gave listeners of Kol Barama radio an idea of the acts committed by the man for whom a special Knesset caucus was established. “It’s hard for us to comprehend the notion of a person betraying his homeland,” said Shai. “There was money, he got paid for his activity, he got paid, maybe he didn’t get everything but he received payment [$30,000 a year]. It’s also a kind of espionage … He tried to sell documents to other countries, too, not just to Israel.” Nonetheless, Shai added that after Israel assumed responsibility for Pollard’s actions and granted him Israeli citizenship, it was incumbent upon it to go the whole nine yards on his behalf.

Not only did Shai brand Pollard a traitor to his homeland and a paid spy, he also compared him with Mordechai Vanunu, Israel’s “nuclear spy.” In 1988, Vanunu was convicted of treason and aggravated spying for selling the British Sunday Times classified documents about the inner workings at the Dimona nuclear facility. A court sentenced him to 18 years in prison. For the first 11 years of his sentence, he was kept in complete isolation.

In fact, the two affairs share many similarities. Vanunu, like Pollard, worked for a defense agency, abused his employer’s trust and inflicted serious damage to his country's national interests. Both had ideological motivations, albeit wrapped in cash. Vanunu sought to shatter the conspiracy of silence surrounding Israel's nuclear capabilities and the public's reluctance to know about goings-on at Dimona. Avner Cohen, author of “Israel and the Bomb” and a lecturer on nuclear studies at the Middlebury Institute for International Studies in Monterey, California, argues that Vanunu was not a spy at all. Rather, he considers him the “original Edward Snowden.”

Like Pollard, even after Vanunu served his entire sentence, he was considered a ticking time bomb of secrets. He, too, was prohibited contact with the media and permission to leave the country. Although it has been more than a decade since Vanunu's release, and almost 30 years since he was jailed, he is still not a free man. This is where the similarity between the two convicted felons ends.

Pollard got his own Knesset caucus, an (illegally constructed) East Jerusalem building named after him (“Jonathan House”), assistance for his financial rehabilitation and organized efforts to embellish his motives and actions. Vanunu, on the other hand, still bears the mark of Cain, of a traitor and spy. Not a single Knesset member has lifted a finger to remove the travel restrictions on him and the other limitations imposed by state security. No major media outlet has slammed the security agencies' “vindictiveness” against Vanunu. Reporters are too busy with the Pollard release circus. Commentators are shocked by the restrictions placed on Pollard by the US government.

Israelis having different attitudes toward the two spies is not unusual. It is typical of the lack of symmetry between Israel’s attitude toward those who harm its security and the attitude it demands toward Jews who harm the security of their homeland. One can assume that had Pollard been an American Jew who joined Mossad and sold a million classified documents to US intelligence out of greed — after offering his services, so it's been reported, to South Africa, Argentina, Taiwan, Pakistan, Iran and Australia — the Israeli public and its elected officials would have condemned any attempt by an American president to intervene on his behalf. What would the Knesset members lobbying for Pollard have said about a US congressional caucus lobbying for the release of an Israeli Pollard? How would the media relate to a proposed bill in Congress providing him lifetime financial support and subsidies for his rent and medical expenses?

The first lesson of the Pollard affair is that the capacity for compassion has no religion, and the capacity for forgiveness has no nationality. Your hero is often the enemy of the other party and vice versa. The second lesson is that “security needs” are not moral disinfectants or stain removers. Anyone who decides to run a spy in the territory of an important ally must keep in mind that there is a limit to what close friends are willing to put up with. The third lesson is that there are times when the true hero is the politician who curbs his desire for publicity. The noisy politicos did not shorten Pollard’s sentence by a single day and perhaps had the opposite effect. The media bonanza they have been riding since his release will not cut short the parole restrictions imposed on him. In fact, the opposite might transpire.