Israeli-American billionaire Haim Saban tried to prepare Biden for his first visit to Israel as president, saying Netanyahu's return as prime minister could be problematic. 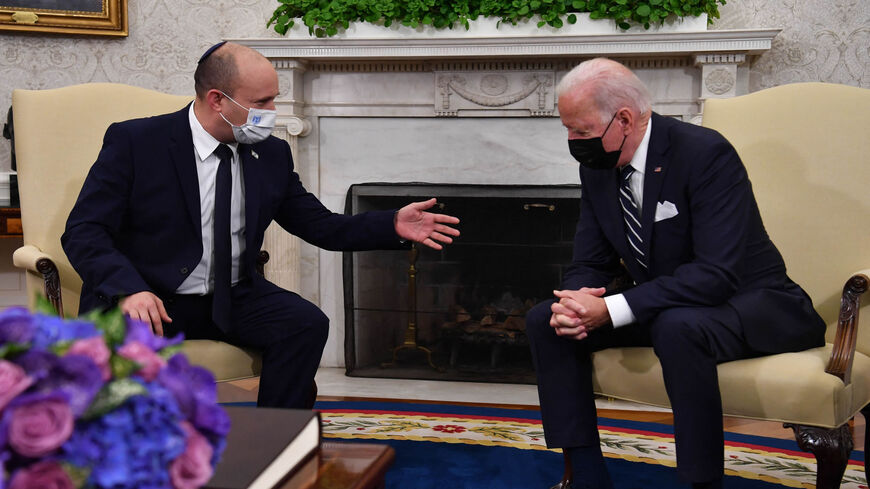 “Mr. President, by the time you get there, Israel may have a different prime minister,” Israeli-American billionaire Haim Saban told US President Joe Biden in a June 10 conversation. “I am going to visit Israel, not to visit Israel’s prime minister,” was the president’s immediate retort. “I will accept and work with anyone elected to that post. This is a visit to the Middle East, and it won’t get postponed.”

Saban, one of the Democratic Party’s biggest donors, met with Biden at his Los Angeles home where he hosted a fundraiser for the president. Following the almost hourlong meeting, also attended by presidential aide Steve Ricchetti, Biden went to greet the guests who had paid between $1,000 to $36,000 to meet him and hear him speak.

Saban told Al-Monitor that Biden had declared his intention to run for a second term in 2024. “He spoke to the audience for 45 minutes in great detail, and did not read from his notes. He looked to me to be in excellent shape.”

Biden is scheduled to land in Israel July 13. His two-day visit is planned to include a brief stop in Ramallah, the West Bank seat of the Palestinian Authority for a meeting with Palestinian President Mahmoud Abbas. Although Biden regards his Israel visit as important, it clearly takes a back seat to his next stop in Saudi Arabia. While the meeting with Saban was intended to “prepare” Biden for his first presidential trip to Israel, the Saudi issue also came up in the conversation at great length.

In Jerusalem, meanwhile, Prime Minister Naftali Bennett is holed up in his office, waging a desperate battle for his government’s survival. Judging by the current state of affairs, his prospects are slim of seeing through the Knesset’s summer session over the coming five weeks (until the end of July).

Bennett’s minority government could find itself losing in an opposition vote to disband the Knesset, in which case Alternate Prime Minister Yair Lapid would take over the reins, or an alternative government led by his predecessor, Benjamin Netanyahu, could be sworn in. But that option also appears unlikely given the bad blood between the politicians who would have to accept Netanyahu’s leadership in order to obtain a Knesset majority: Bennett and his political collaborator Interior Minister Ayelet Shaked as well as Justice Minister and former Likud stalwart Gideon Saar, or Defense Minister Benny Gantz, who has already undergone the bitter experience of serving under Netanyahu and barely survived to tell the tale.

As for the Biden visit, the Americans have asked Israel to ensure calm and as few hitches as possible. In response, the government has decided to delay until after the presidential visit the razing of the West Bank home of the terrorist who killed a security guard in the settlement town of Ariel in April. The decision followed a specific American request, conveyed through official channels, to avoid unnecessary friction with the Palestinians during the visit.

Biden’s 2010 visit to Israel as vice president was marred by an official announcement of plans to build 1,600 housing units in East Jerusalem, which resulted in an angry confrontation and led Biden to consider cutting short his trip. Netanyahu was prime minister at the time. Twelve years on, Biden is president, Netanyahu has been downgraded to lead the Knesset opposition, a perch from which he constantly threatens to return to power, just as his close friend at the time, President Donald Trump, is warming the benches in the United States and challenging his successor (although Netanyahu stands a chance of success much sooner).

Saban told Al-Monitor this week that the Biden administration is “very concerned and well informed” about the political developments in Israel, and especially by the meteoric rise of ultra-right Knesset member Itamar Ben-Gvir, considered the successor of ultranationalist Israeli-American Rabbi Meir Kahane.

Saban himself has firm views regarding a possible Netanyahu comeback. “My views on Netanyahu’s return are known. I spoke about it with the president. He understood but made do with body language using his hands, head and eyes. He also stressed that as far as he is concerned, he accepts anyone the Israelis elect as their leader.”

What does Biden stand to gain in Saudi Arabia, Al-Monitor asked Saban. “We should pay attention to see if a photo of Biden posing alone with Crown Prince Mohammed bin Salman is made public, or if others are in the photo, too. This would be significant. Meanwhile, the president is maneuvering quite well. He has already been promised increased Saudi oil output and has yet to pay the price. He will try to achieve progress in normalization measures with Israel.”

Al-Monitor asked Saban about the likelihood of such concrete moves. “It will eventually happen,” he said. “A few years ago, I met here with Mohammed and asked him what they were waiting for. He indicated that if he goes ahead, he would pay a heavy price exacted by Qatar, through [the Qatari-owned media outlet] Al Jazeera, and the Iranians would also not see this favorably. I think he is waiting for a generational change in Saudi Arabia and knows that this [normalization with Israel] cannot be delayed forever.”

Alternate Prime Minister and Foreign Minister Lapid also referred to the Saudi issue this week ahead of the Biden visit. Lapid sought to downplay expectations, saying no major steps are anticipated, only small, measured ones, but added that he does not want to steal the show from the Americans. If there is anything to report, he said, the president or his people will be the ones doing so.

Saudi Arabia is expected to allow Israeli planes to overfly its territory (it currently only allows such passage for flights from Israel to Abu Dhabi and Bahrain), and perhaps even direct flights for Arab Israeli citizens making a pilgrimage to Mecca. A dramatic surprise of some sort could still occur, but its prospects are low.

The Iranian issue will take center stage in Biden’s talks in Israel. Saban also raised it with Biden, expressing harsh criticism of his envoy Rob Malley’s May 25 Senate testimony saying that while all options were on the table vis-a-vis Iran, military pressure was not viable. Saban asked the president why he was letting his people say such things, adding, “How can one conduct negotiations this way?”

The president, according to Saban, agreed with him and said, “We are handling it.”

Either way, Biden has scored major points in Israel with his insistence on rejecting Iran’s demand to remove Iran's Islamic Revolutionary Guard Corps from the US list of terrorist organizations as a condition for its signature on a nuclear agreement.

Bennett and Lapid will try to convince the president to formulate a joint Israeli-American plan for the “day after,, which would include new measures against Iran and a joint blueprint in case Iran tries for a nuclear breakout, whether clandestinely or publicly. Biden, for his part, will reportedly do all he can to accelerate plans for the formation of an Israeli-led strategic Middle Eastern defense alliance taking shape against Iran.