The Kurdish peshmerga forces stationed in Mula Abdula are just a few meters away from the Islamic State militants subject to the international coalition’s airstrikes. 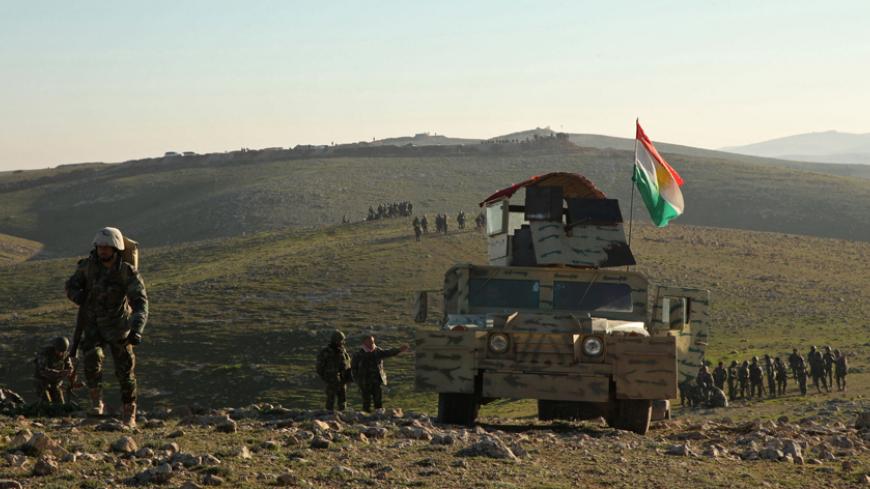 Kurdish peshmerga fighters walk with their weapons as they take control of an area on the outskirts of Mosul, Feb. 6, 2015. - REUTERS/Ari Jalal

MULA ABDULA, Iraq — "How are the skies?" a gruff voice asks in Iraqi Arabic dialect. "The skies are clear," is the reply, after a crackle of static on the walkie-talkie through which a Kurdish major is listening to the conversation between two Islamic State (IS) militants on the other side of this front line, southwest of Kirkuk in Northern Iraq.

An irrigation canal no wider than 10 meters (33 feet) separates the lightly armed Kurdish peshmerga forces from the extremist militants in Mula Abdula, where Maj. Aziz Ahmad stands behind a defensive berm, holding the walkie-talkie up to intercept the enemy’s communications.

“They change the frequency regularly and it is not easy to intercept,” he told Al-Monitor. "IS is terrified of bomber aircraft, especially the French.”

With the help of coalition airstrikes, Kurdish forces have reclaimed most of the area they lost to IS in August 2014, driving the militants out of 15,000 square km (9,300 square miles) they consider historically their own. But the peshmerga forces have neither the will nor the means to advance much further into Sunni Arab areas.

The front line at Mula Abdula, 25 km (15.5 miles) southwest of Kirkuk, has not moved since June 2014, when the militants overran Mosul and other Sunni-majority areas including Hawija 35 km (22 miles) away.

“Why should we shed Kurdish blood for Hawija when we know the Iraqi government will claim it back once the IS threat is gone?” responded Capt. Rebwar Mala Ahmad when Al-Monitor asked whether there were any plans to cross the canal and attack IS on its own turf.

The Kurds’ reluctance to move forward and desire to avoid inflaming sectarianism by deploying Shiite militia forces to those areas means IS has not been dislodged from any of Iraq’s Sunni heartland. Efforts to reconstitute the several army divisions that collapsed last summer are proceeding slowly, and the “spring offensive” touted by some Iraqi and US officials to retake Mosul seems increasingly unlikely.

In the village of Mula Abdula, a flock of blackbirds and starlings alights on the remains of a pillar that used to sustain a house recently smashed by airstrikes. Thick columns of smoke belch from two oil wells, set on fire by IS militants when they were driven out of the area after briefly overrunning it on Jan. 29.

Although the militants have not made any gains in Northern Iraq since the airstrikes began in August 2014, they are still attacking peshmerga forces regularly and mounted a major offensive around Kirkuk in January, shortly after suffering humiliating defeats in the Syrian town of Kobani and near the Mosul Dam.

Taking advantage of dense fog, the militants managed to cross the canal, killing at least 30 peshmerga fighters, including two generals, before Kurdish reinforcements, including an elite counterterrorism squad, drove them back.

"We kept shooting at them but they kept coming," said Goran Nasraddin, one of the few peshmerga fighters from his unit to have survived the assault, in which he sustained multiple injuries. "I counted around eight IS fighters who fell as I fired my gun, but nothing stopped them.”

When Nasraddin realized all his co-fighters had fallen, he hid in a cesspit for 12 hours until IS militants were pushed back. "I immediately put my phone on silent. I knew I would be beheaded if they captured me alive," Nasraddin told Al-Monitor. By the time he emerged, his parents had already given him up for dead and dug a grave for him on a hill surrounded by pine trees in his village.

The Kurds took full control of Kirkuk in June 2014, meeting no resistance as the Iraqi army melted away. But the oil-rich city is proving less easy to defend.

Since January’s attack, the peshmerga forces have destroyed all but one of the bridges crossing the canal to hinder any future attack. Lack of weaponry and communication equipment has also made Kurdish forces vulnerable to IS attacks. "In this unit, we only have two old rocket-propelled grenades and the rest is old light arms," Ahmad said. "We are fighting this group on behalf of the world, but we have no weapons to do so."

The force also suffers from internal weaknesses. Several peshmerga fighters on the front line speak scathingly of their commanders, many of whom they accuse of running away in the heat of battle.

Mala Ahmad, who retired due to injuries in 2005, has more than 20 years of experience as a peshmerga fighter and returned to duty when IS advanced on Kurdish areas in June 2014. He has fought IS as a sniper volunteer from Jalawla in Diyala province to Tuz Khormato in Salahuddin province and now across the Kirkuk front line. He told Al-Monitor that when IS attacked on the night of Jan. 29, he saw commanders run from the battlefield, leaving their men behind, saying, “It was by the grace of God that we were not caught.”

He added, "When I saw them that night, I shouted at the commanders and called them cowards for leaving their men behind."

As the two adversaries face off across the canal, bewildered Sunni residents caught in between try to make sense of the mayhem around them in Mula Abdula. Farmer and father of three Ahmad Salim told Al-Monitor, "Our problems started when IS emerged. We came back to the village because no one wants us. The residents of other villages don't let us in and Kurdish security forces don't allow us to enter the Kurdish areas.”

Across the canal, the IS militants have more pressing issues at hand as the roar of warplanes reverberates overhead. "Watch out, a warplane is approaching," an IS militant can be heard saying through the major’s walkie-talkie.