The Islamic State is losing ground in Iraq and Syria, but south of Kirkuk, the militants are inflicting heavy casualties on peshmerga fighters, who blame needless losses on a lack of support. 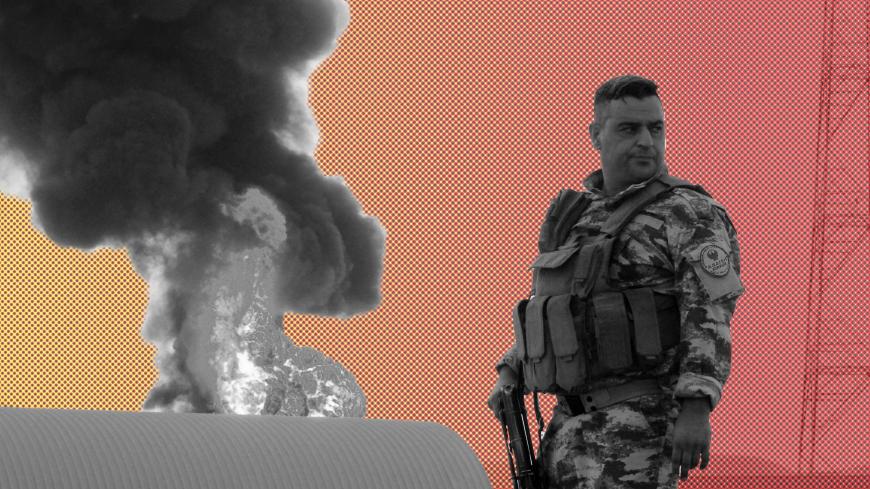 KIRKUK, Iraq — Peshmerga fighters around Kirkuk feel abandoned by the Peshmerga Ministry and the Kurdistan Regional Government (KRG) amid the petty rivalry of the two main parties that command the force.

Falah, Arkan and Masoud served together near the village of Albu Mohammad, which marks the front line between the peshmerga and Islamic State (IS) militants to the south of Kirkuk. Just before midnight on Aug. 11, some three dozen IS militants snuck into the area and surrounded the peshmerga posts. A firefight broke out and most peshmerga fighters retreated, leaving the three friends on their own. In a video released later by IS, relaxed militants are shown walking around the peshmerga positions, setting them alight and emptying bullets into the body of one of the men. The body of another is seen under a militant's foot. By the end of the battle, the three friends lay dead and seven other fighters wounded. IS seized their weapons and ammunition.

"Peshmerga officials have abandoned us to our own fate. We are dying needlessly," said a fighter who asked to be identified by "Capt. Ahmad." He's been a member of the peshmerga for over two decades.

A furious peshmerga intelligence officer said he has been warning about the vulnerabilities of his forces in the area. He told Al-Monitor, "All we need is a number of infrared cameras to the south of Kirkuk to hold [IS] at bay." The young officer, who asked not to be identified for fear of reprimand by his superiors, said he is speaking out because no one listens to him and other fighters who are dying unnecessarily. He complained that the Popular Mobilization Units have infrared cameras "and [IS] is hardly able to launch attacks on their positions."

Kurdish peshmerga forces have been a critical pillar of the international coalition against IS. They've lost over 1,700 men and more than 10,000 have been wounded over the last three years. As Iraqi security forces backed by coalition advisers and air cover root out IS militants from the Turkmen town of Tal Afar near Mosul, a large area in the north of Iraq is still in the hands of the militants: the Hawija pocket and parts of the Hamrin mountain range.

Several peshmerga officers from the rank of captain to colonel who spoke to Al-Monitor on condition of anonymity said that had the Peshmerga Ministry heeded their warnings, more than 20 peshmerga fighters would not have died in recent months.

The peshmerga intelligence officer said that in addition to infrared cameras, they need drones to monitor the hilly terrain dotted with streams and long grasses, an ideal setting for IS ambushes. "We don't have any technology available to us and we rely on human intelligence almost all the time," he said. "[IS] has depopulated most of the area because they know the locals pass on intelligence to us, so we can't be sure when they plan to launch an attack." The officer and two others complained about corruption and trading that goes on between IS and some peshmerga members. Back in December, seven officers were arrested for trading with IS, providing them with vehicle parts and food. IS managed to smuggle around 100 fighters into the area to launch a major attack on Kirkuk in October, killing over 100 and fighting for three days inside the city. In May, five IS suicide bombers tried to enter the K1 military base in Kirkuk, where Americans and Germans are stationed, but failed.

"The delegations from the Peshmerga Ministry visit us in their four-wheel-drive vehicles, chat with the top commanders over nice food and then go back to Erbil. That is all they do," said Ahmad. "We stay awake day and night on the front line but the Peshmerga Ministry is negligent when it comes to protecting the blood of the peshmerga fighters."

Several members of the international coalition against IS — the United States, Germany and the United Kingdom — are currently at work revamping the Peshmerga Ministry and addressing the corruption that plagues the institution.

"We have lost eight men and had 13 or 14 wounded over the last two months," said a senior officer from the peshmerga's 11th Brigade in charge of the Zarga area west of Tuz Khormato, another region that has come under frequent IS attacks. "Our brigade is not enough to control this large stretch of border, and we are not adequately armed to confront the threat."

A peshmerga captain who served in the area and is familiar with the operational command said all the forces deployed to the area have suffered heavy casualties. "The problem is political rivalry," said the captain, explaining that the Patriotic Union of Kurdistan (PUK) and the Kurdistan Democratic Party (KDP) refuse to deploy their best forces there. "There is even rivalry over which company constructs the berm for the peshmerga because even the companies are affiliated with one of the parties." The captain, who has gone through several training courses with the coalition forces, said the solution is for the Peshmerga Ministry to deploy the 1st and 2nd Brigades trained and armed by the Americans to the area and provide them with infrared cameras. "I don't think they are going to do that because the best equipment and arms go to the elite forces of the KDP and PUK," he added.

"Every time I say goodbye to my wife and my three children and go to the front line, I don't expect to see them again," said Ahmad. "But I don't want to show my fear because I don't want my children to remember their father as a coward in case I am killed."