The majority of Iraqi Kurdish peshmerga forces are divided between the two main rival political parties, hindering efforts in the fight against the Islamic State. 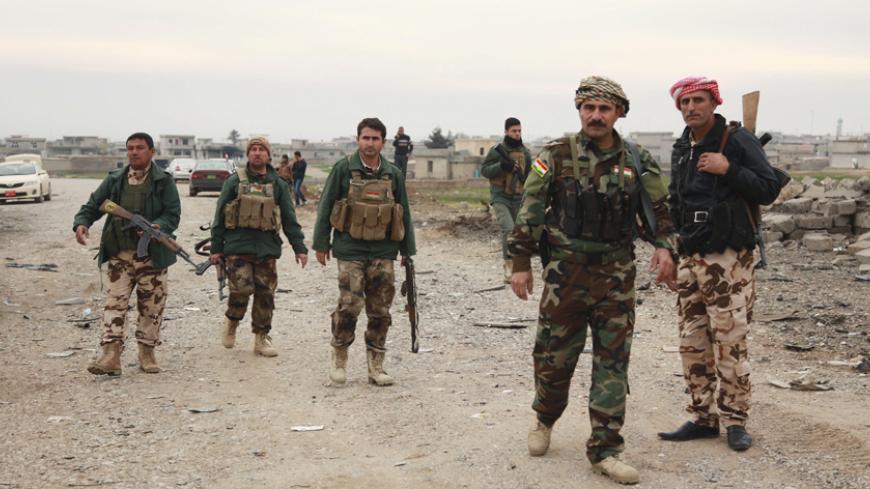 SINJAR, Iraq — Next to a row of abandoned shops, three peshmerga fighters warm themselves around a campfire at the entrance to Sinjar town as their comrades, backed by US-led coalition airstrikes, battle Islamic State (ISIS) militants a few hundred meters away. “All Kurdish forces fight Daesh together in Sinjar town. … I don't care which party the peshmerga next to me belongs to when we fight these terrorists,” says Moein Mawlood, a 54-year-old fighter. “We are all in this fight together.”

Facing a common enemy along the front line in northern Iraq, Kurdish peshmerga have set aside their partisan loyalties to protect their homeland. The division between the region's main two political parties — the Patriotic Union of Kurdistan (PUK) and the Kurdistan Democratic Party (KDP) — however, persists.

While peshmerga have emerged as the most trusted ally of the US-led coalition fighting IS — albeit at a great price to them, with close to 800 peshmerga dead and more than 3,500 wounded — the lack of a unified command and force divisions have undermined their efforts against the extremist group. When IS fighters launched coordinated attacks along a 1,000-kilometer (621-mile) front line in early August, the fragmented and poorly armed and trained peshmerga forces could not respond in kind, because they lacked organization under a centralized command. Many peshmerga still owe their allegiance to the PUK or KDP, not the Kurdistan Regional Government (KRG).

The division among Iraqi Kurds emerged in 1975, when the PUK branched off from the KDP. The two parties subsequently fought a bloody civil war in the 1980s and 1990s over leadership of the Kurdish struggle, resulting in several thousand deaths. A legacy of that conflict is the entrenched rivalry between the leadership of the two parties, which has prevented the unification of the peshmerga.

The competition between the KDP and PUK gave rise to a vast network of patronage, whereby thousands of people now receive their salaries through appointments linked to the two parties in return for their votes. Another manifestation is a large number of "ghost" peshmerga who either do not exist or do not turn up for duty. Their salaries are still paid; however, a portion of that goes to the commanders.

In October, Ali Hama Salih, a parliamentarian from the Movement for Change, or Gorran, told his party’s media outlet that the KRG's Ministry of Peshmerga Affairs has one of the largest numbers of ghost employees. Official KRG estimates put the number of peshmerga at around 190,000 to 250,000, but some officials say it is in fact far lower. It is not uncommon for senior peshmerga officials to receive promotions on the basis of their loyalty to one of the rival parties instead of their military prowess.

“The best thing that could happen to the Kurds is if the PUK and KDP peshmerga united. Peshmerga are the soul of Kurdistan,” said Omar Mohsen, a PUK member since 1976 who fought IS militants for 23 days in August in a village near the Syrian border. He lamented, however, “Corruption won't allow it. The PUK and KDP leadership is rife with corruption."

In the past, the Kurds' internal division had dissuaded the United States from training and equipping the peshmerga. Before the last US troops left Iraq, Gen. Raymond Odierno, commander of Multi-National Force-Iraq, sat down with the Kurdish leadership in northern Iraq to convey an important message from Washington. According to the minutes of the 2009 meeting obtained by Al-Monitor, he told them he had come to talk about "peshmerga affairs" and said, "Funds have been put aside by Congress to prepare, train and arm the [peshmerga] force … but I can’t give it to two separate peshmerga forces … unless they are unified."

“The Americans wanted to create a unified, apolitical and professional [Kurdish] force as part of the Iraqi national army, but for this they needed the agreement of the officials of the PUK and the KDP,” explained Abdulrazaq Sharif, who attended the meetings between the Americans and PUK officials as a press officer. "The PUK and the KDP officials lost an important opportunity to be trained and armed by the US armed forces, which could have been very effective against the Daesh attack in August."

When IS attacked, peshmerga forces were overstretched on a long front line, from the Iranian border in the east to the Sinjar area near the Syrian and Turkish borders in the northwest. The PUK peshmerga were concentrated in Sulaimaniyah, areas of Kirkuk and parts of Diyala and Salahuddin provinces, while the KDP fighters defended the northern front in Erbil, Dahuk and parts of the Ninevah plains. IS fighters managed to advance to within 40 kilometers (25 miles) of the Iraqi Kurdish capital, Erbil, and it was only because of Iranian assistance on the ground and US air cover that the extremists were repelled.

One senior peshmerga official, frustrated with the lack of a unified command in the Kirkuk area, provided the following example of the lack of coordination between the two parties that led to the deaths of 11 peshmerga Nov. 24. Speaking on condition of anonymity, he said the KDP and an allied Iranian Kurdish group had attacked Kharabarut, west of Kirkuk, without informing the PUK, and unilaterally seized the area. When IS counterattacked, they withdrew from the area, but the PUK peshmerga advanced and were taken by surprise by the militants.

There are moves underway to bring the two peshmerga forces under one umbrella. The Iraqi Kurdistan parliament passed Law 19 on July 23 to place all peshmerga under one command, setting a fast-approaching deadline of six months to make it happen. While 12 out of 36 brigades have been unified under the Ministry of Peshmerga Affairs, the PUK and the KDP have retained command over the overwhelming majority of their forces, which include peshmerga and thousands of personnel in counterterrorism units as well as the secret police, known as Asayish.

KRG President Massoud Barzani wrote to Peshmerga Minister Mustafa Said Qader on Dec. 14 urging him to speed up the process of bringing all the forces under one command. "Any force that exists outside the command of the [peshmerga] ministry will be considered illegal, and no one has the right to form a new force outside the ministry," said Barzani.

Both PUK and KDP peshmerga commanders have also called for the various Kurdish forces fighting IS to be brought under a single command structure so they can be institutionalized. “The peshmerga forces of various parties are defending Kurdistan side by side,” said Maj. Gen. Rasul Omar Latif, the PUK commander on the south Kirkuk front line, which has seen some of the fiercest fighting since June. “The institutionalization of the peshmerga should have been done before this war. You should ask the former peshmerga minister why they failed to do it.”