Some Kurdish officials are hopeful that new peshmerga brigades will be immune to politicization. 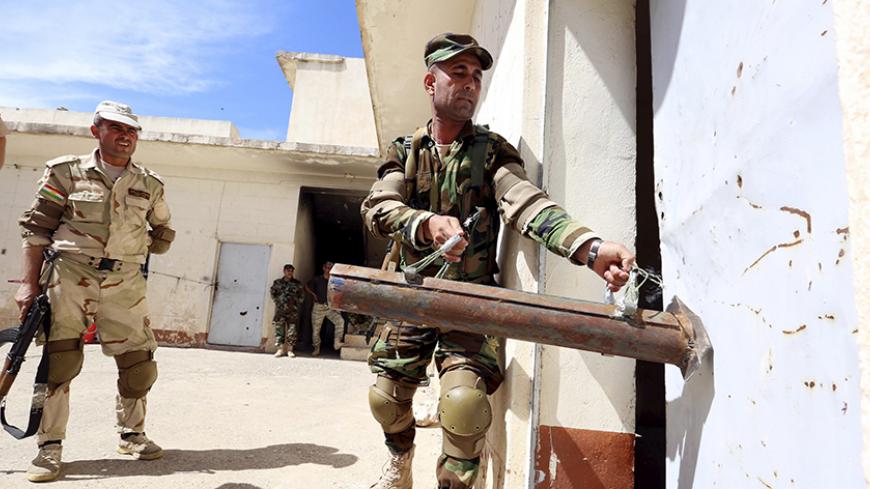 Kurdish peshmerga participate in a training session at a training camp on the outskirts of Dahuk province, April 7, 2015. - REUTERS/Ari Jalal

ERBIL, Iraq — Dildar Namiq, 24, is eagerly running up and down a flight of stairs in a two-story office, trying to complete paperwork to join Iraqi Kurdistan's armed forces, known as the peshmerga. He is one of the more than 600 volunteers who have applied in the last 12 days in this registration center to join three brigades that will be formed soon.

"I'm a taxi driver right now and I want to do something better in my life," Namiq said. He is wearing traditional baggy Kurdish pants and a white shirt. "I want to go to the front lines and fight Daesh," he added, referring to the Islamic State (IS) group by its Arabic acronym.

Despite some setbacks last summer, Kurdish peshmerga have been able to hold their ground against IS along a 1,050-kilometer (652-mile) frontier that stretches from the Syrian border in northwest Iraq to the Iranian border in the northeast.

Kurdish officials are pinning a lot of hope on the new brigades that will be far better trained and armed than existing units.

"These brigades will be the basis for a new professional army that is up to the expectations and needs of Kurdistan people," Saeed Kakayi, an adviser to Kurdistan's minister of peshmerga, told Al-Monitor. "[The plan is] to standardize the peshmerga ranks in terms of military structure, training and weaponry."

The new brigades are a joint venture by the Kurdish Ministry of Peshmerga and the US government, and part of a broader plan to build 12 brigades across Iraq to confront IS. Training could start in August and the three Kurdish brigades will contain slightly over 6,500 soldiers. The United States will provide complete brigade sets to these new units.

He said the United States, in coordination with the international coalition fighting IS, has so far provided over $180 million worth of equipment and ammunition to the Kurdish Ministry of Peshmerga.

There have been increasing calls in Kurdistan by figures across the political spectrum to reform the structure and training of the Kurdish peshmerga to improve their performance on the battlefield.

Many fear lack of deep reforms in the peshmerga ranks will adversely affect the development of a civic and democratic political structure in Iraqi Kurdistan. Each of the two dominant Kurdish parties — the Kurdistan Democratic Party (KDP) and the Patriotic Union of Kurdistan (PUK) — still exert control over large portions of the peshmerga. The KDP is headed by the Iraqi Kurdistan's President Massoud Barzani, while PUK leader Jalal Talabani was until last year Iraq's president.

The structure of the peshmerga is made up of 16 joint brigades controlled and directed by the Ministry of Peshmerga. In addition, there are Division 70 and Division 80 units, the former affiliated with the PUK and the latter with the KDP. There are also two mechanized units that possess heavy weaponry. There are no exact figures on the number of the peshmerga, but estimates point to upward of 100,000 troops and some to as many as almost 190,000.

Observers of Kurdish affairs have pointed out to issues such as politicization and, at times, lack of a coherent central command line in the ranks of the peshmerga as factors hampering the development of an official Kurdish army.

But building a united army, some experts warn, is not merely about gathering disparate forces under a nominal umbrella.

"The Lebanese experience showed that forming combat units of mainly one confessional group or another was not conducive to genuine integration and left the army vulnerable to splits. So integrating units thoroughly is important," Yezid Sayigh, a security and defense expert and senior associate at Carnegie Middle East Center in Beirut, told Al-Monitor.

Sayigh, who recently attended a conference in Erbil on ways to reform the peshmerga, believes "the partisan nature of various peshmerga units and commands is a serious impediment to operational effectiveness and opens the risk of splits and violence" as occurred during the Kurdish civil war in the mid-1990s.

The deficiencies were particularly laid bare during the first few months of the fight against IS.

In August 2014, IS routed the Kurdish forces in western and northern Ninevah province forcing tens of thousands of Yazidis, Christians and other residents of those areas to flee to Iraqi Kurdistan. The jihadist militants even made it as close as a dozen miles to Erbil.

But with assistance from the US-led international coalition, the peshmerga pushed IS back from much of the area it took from them. As IS was rolled back, the battlefield saw a mad dash as partisan peshmerga units rushed to stick their respective party's flags in the wake of every minor and major victory to prove it was their party that accomplished the task.

Dismayed by such actions, many in Kurdistan hope the war against IS can become an opportunity to unify the peshmerga and change the manner in which they operate.

In August 2014, the Kurdish parliament passed a resolution calling for the unification and subjecting of Division 70 and 80 forces to the peshmerga ministry's control. It set a six-month deadline for that process to be completed, but 10 months later, the objectives are far from being achieved.

"This can't be just resolved by a parliament resolution and has a lot of historical background to it and this needs negotiations between [the KDP and PUK] parties outside parliament," said Ari Harsin, chairman of the Kurdistan parliament's peshmerga affairs committee. "But the process has started and, for example, the finances of both divisions [70 and 80] are now under the control of the minister of peshmerga."

Amid an atmosphere of political distrust and slow unification, Namiq and other young men queuing up in the volunteers' registration center in Erbil could perhaps make history and become the nucleus of a united and professional Kurdish military force. The three brigades are the first Kurdish units where the recruits are not selected based on partisan loyalties.

"I'm happy these units are different," Namiq said. "Anyone like me who wants and meets the requirements can come and sign up here."