The situation of the peshmerga forces in Iraq's Kurdistan Region is precarious in the absence of coordination with the Iraqi government and the economic crisis that has left them long unpaid. 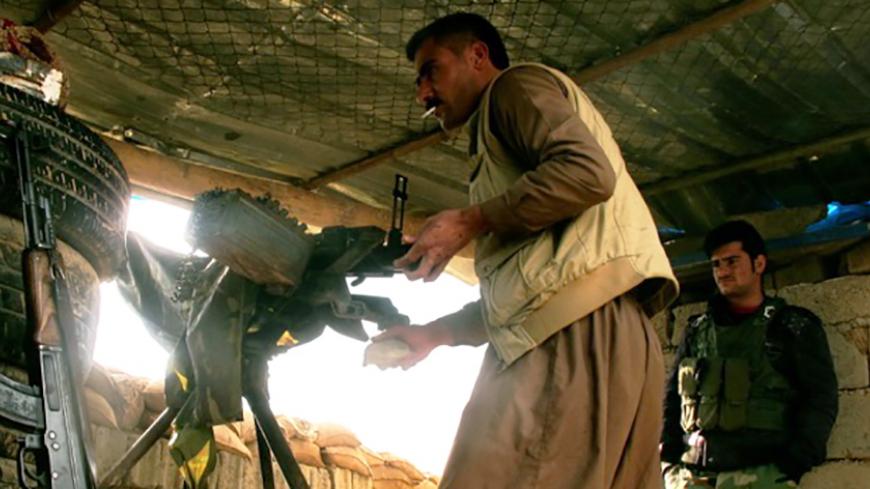 A peshmerga soldier fixes a heavy machine gun on a front line against the Islamic State near Kirkuk, Iraq, Feb. 7, 2016. - Shelly Kittleson

KIRKUK, Iraq — An unexpected shot rang out as a peshmerga officer pointed over sandbags at a black Islamic State flag in the distance.

“Just shooting at a bird,” he said, swiveling around to see what the other men were doing below, near a cluster of deserted mud and brick homes in the closed military zone on the wide, oil-rich plains of northern Iraq. He said that the other soldiers seen on the way to the front line wandering around abandoned, heavily damaged villages had been looking for firewood for warmth on that February night.

Soldiers warmed their hands at a small fire built below an earthen embankment as dusk fell. Others mulled around, smoking and chatting, Kalashnikovs slung across shoulders, while one tried to fix a heavy machine gun pointing toward IS-held territory.

This front line is near Kirkuk, about 250 kilometers (155 miles) north of Baghdad and about 90 kilometers (56 miles) south of the Kurdistan Regional Government (KRG) capital, Erbil, long a source of contention due to its proximity to some of the country’s most important oil wells. It's mostly quiet at the moment, one officer told Al-Monitor, other than occasional sniper fire. But the bombing of IS targets by the international coalition continues.

The KRG has been experiencing a severe economic crisis after the freezing of its share of the $102 billion federal budget in 2014, 17% of which was earmarked for the KRG, and a steep drop in the price of oil, which has long been its main source of revenue.

Many public employees, including police, have begun moonlighting as taxi drivers. One of them told Al-Monitor he had not been paid in six months and was now working three days a week as an officer and three as a driver.

Several protests have been held in recent months over unpaid wages, and Kurdish officials have warned that the economic crisis could increase desertions from the peshmerga, who blocked roads in Sulaimaniyah in February to demand their salaries.

Gen. Wasta Rasul, who oversees Sector 4 of the KRG’s eight front-line zones, told Al-Monitor back at the K1 base northwest of Kirkuk that he commanded about 23,000 peshmerga, but that “only about a third are on duty at any given time, due to the ministry’s orders,” because of the economic difficulties. He said that salaries hadn’t been paid in around three months, adding that a private is due around $400 per month.

Nevertheless, he said, his troops had taken an area of “around 120 kilometers [75 miles]” in about six months.

Several damaged Humvees that the United States gave to the Iraqi army but that the peshmerga say they took in the fighting against IS sit awaiting repairs. Every military vehicle seems to have a cracked windshield.

At a nearby base, Patriotic Union of Kurdistan commander and former Minister of Peshmerga Sheikh Jaafar Sheikh Mustafa complained, “We haven’t seen any cooperation with the Iraqi government. When we ask for things, they just ignore us.” He cautioned, however, that at this point any further advances would have to be made in coordination with the Iraqi central government, given the “situation with Shiite militias.”

He told Al-Monitor that though there was currently no fighting with the mainly Shiite militias of the Popular Mobilization Units in the nearby flashpoint town of Tuz Khormato, the situation there “is very fragile.”

The string of clashes beginning in October last year between the Popular Mobilization Units and peshmerga have been quelled, but rumors of extremely high levels of disappearances and sectarian-based kidnappings in the town mean “we don’t know when it will start again,” Mustafa said. For example, he noted, if the Shiite Turkmens find an Arab Sunni in the mixed-ethnicity town, “they will kidnap him.”

“It’s a mess,” he said of the various groups that make up the Popular Mobilization Units, noting that there is no clear chain of command and they all acted independently to some degree. “Though when it comes to fighting against us, they all work together,” he said.

As for an Amnesty International report released in January that accused the peshmerga of involvement in home demolitions and forced displacement of Arab communities, both Mustafa and Rasul said that the international organization “doesn’t seem to understand how dangerous IS is,” and that the level of destruction was due to the fact that the jihadis “hide everywhere and fight to the death,” leaving areas filled with explosives. No IS prisoners were taken in his area for this reason, he said.

Mustafa said that the peshmerga took IS prisoners in other sections under his command, but that “about 80% of our losses are to improvised explosive devices and booby-trapped buildings, and only about 20% of the deaths are due to shooting, mortar rounds, etc.”

The K1 base, where Rasul is stationed, was initially an Iraqi forces air base and taken over by US forces in 2003 only to later be handed back to Iraqi forces. The peshmerga took it over in 2014, reportedly at the request of the Iraqi prime minister at that time, Nouri al-Maliki, after government troops abandoned their positions in Mosul, allowing it to fall into the hands of IS.

Rasul noted that several foreign armed forces had been helping the peshmerga there “for over a year, with everything — training, weapons, etc.,” citing “Americans, Italians, French, Norwegians and others.”

He said that they were grateful for all the help they were receiving, but that the economic situation in the country remained a major problem.

Meanwhile, a trench currently being dug along the front lines held by Kurdish forces — from Khanaqin near the border with Iran across the disputed territory south of Kirkuk and all the way to Rabia, a northwestern town on the border with Syria — has led some to call it an attempt to set down the border of a future independent Kurdistan state.

In response to this contention, Mustafa said, “All Kurds grow up with the idea that the Hamrin Mountains are the border of Kurdistan.”

Referring to a much-debated referendum on Kurdish independence from Iraq — first proposed in 2014 before IS attacks led to a postponement, and for which KRG President Massoud Barzani renewed a call in early February — Mustafa said that they had “shed too much blood to remain under the control of a different country.”