US allies puzzled by March deadline for Iran deal

The Obama administration, in negotiations with Congress, "bought two months, but sold three," for negotiations for a final Iran nuclear deal, according to a Western diplomat. 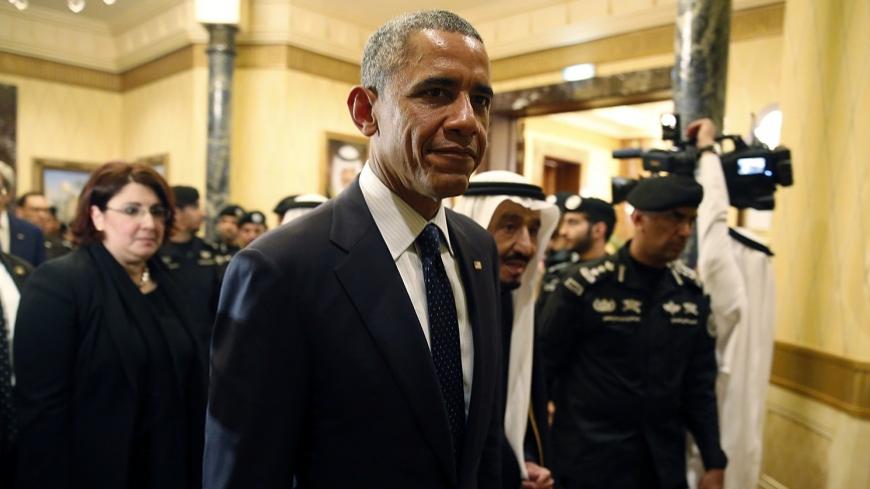 The Obama administration considered it a win when it managed to persuade hawkish Senate Democrats last month to delay a vote on Iran sanctions by two months.

But some US administration allies are puzzled that what they consider a soft deadline for a framework agreement for a final Iran nuclear deal has seemingly become the de facto deadline, rather than the June 30 deadline that Iran and the six world powers agreed to in November.

The US administration has “bought two months, but sold three,” a Western diplomat, speaking not for attribution, told Al-Monitor.

Some Democratic Senators who have signed onto a letter from Sen. Bob Menendez, D-N.J., to President Barack Obama have told interlocutors that the Obama administration asked them to give it until the end of March to see if a framework deal could be reached, before voting on new Iran sanctions legislation.

Sources said that it was their understanding that Obama asked the Senate Democratic caucus at their retreat last month to give him until the end of March to see if negotiators could reach a framework deal, rather than repeating what State Department officials have said, about leaving open the possibility that negotiators could need until the end of June to finish a deal.

“My argument is, for the United States Congress to insist on imposing new sanctions that all our partners, as well as the Iranians, can interpret as a violation of the interim agreement, for us to undermine diplomacy at this critical time, for no good reason, is a mistake,” Obama told CNN’s Fareed Zakaria in an interview aired Feb. 2. “What we need to do is to finish up this round of negotiations, [and] put the pressure on Iran to say yes to what the international community is calling for.

“If I can prove that the deal we've put in place assures us through indisputable verification mechanisms that Iran cannot achieve breakout capacity, if I've got a bunch of scientists and nuclear experts saying this assures us that Iran is not on the brink of being a nuclear weapons power, then that's a public debate we should have,” Obama said.

Obama added, “And I will then ask every member of Congress to ask why would we reject that deal and prefer a potential military option that would be less effective in constraining Iran’s nuclear program and would have extraordinary ramifications at a time when we've already got too many conflicts in the Middle East … And I'm pretty confident I can win that argument.”

The State Department's No. 2 official told a Senate panel Jan. 21 that he would not want to prematurely rule out the need for more time if negotiators were close.

“It is our strong intent to try and reach a basic agreement in March, and then to conclude all the technical details by June,” Deputy Secretary of State Antony Blinken told the Senate Foreign Relations panel at the hearing.

“But I would not want to prematurely rule out, in a sense arbitrarily, any extensions if we're on the verge of completing the technical details in June, but still have i's to dot and t's to cross, we might want a little more time,” Blinken said. “That's at least possible. I wouldn't want to rule it out now.”

It could leave the president “with no maneuverability in his task to secure American security.”

There are still disagreements between the parties, but we are very optimistic and hopeful, Araghchi added.

Iran Foreign Minister Mohammad Javad Zarif and his team are expected to hold talks with counterparts from the United States, Europe and Russia on the sidelines of the Munich Security Forum conference Feb. 6-8, officials said.