Obama: 'Iran’s program has not advanced' 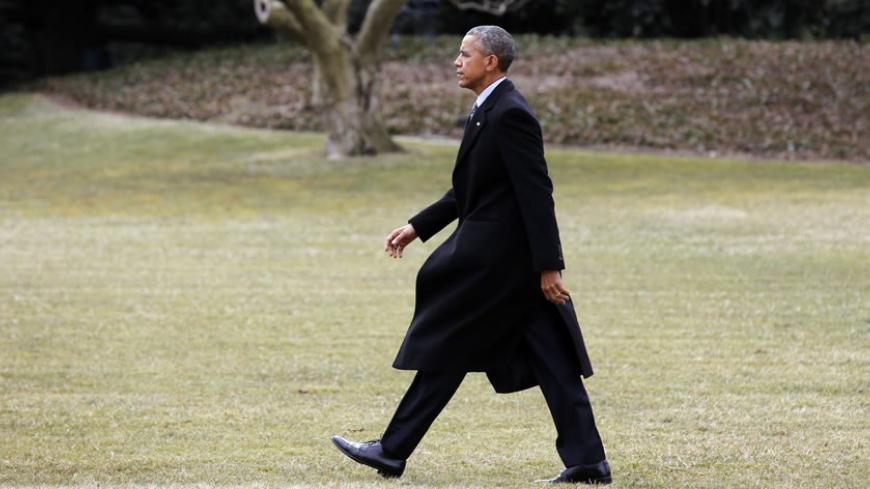 US President Barack Obama walks toward Marine One on the South Lawn of the White House in Washington, Feb. 6, 2015. - REUTERS/Larry Downing

Why the rush for sanctions?

While Julian Pecquet reported last week that the Obama administration may have won a tactical victory by delaying a vote on a Senate sanctions bill until March, Laura Rozen writes that others are questioning the rationale for a March vote.

“Some US administration allies are puzzled that what they consider a soft deadline for a framework agreement for a final Iran nuclear deal has seemingly become the de facto deadline, rather than the June 30 deadline that Iran and the six world powers agreed to in November. The US administration has 'bought two months, but sold three,' a Western diplomat, speaking not for attribution, told Al-Monitor.”

This column has previously questioned the wisdom of rushing to an artificial deadline given Iran’s general compliance with the Joint Plan of Action, signed in November 2013.

US President Barack Obama told Fareed Zakaria on Feb. 1 that a rush to sanctions is ill-timed and unnecessary:

“By all accounts, including the accounts of Israeli intelligence, Iran has abided by the terms of this interim agreement. They have not advanced their nuclear program. They have actually rolled back their stockpiles of highly enriched uranium. And so we have lost nothing during this period of negotiations.

Iran's program has not advanced. And we had the chance of providing a mechanism where we can verify that Iran doesn't have a nuclear weapon and Iran has the ability over time to re-enter the community of nations as a responsible player.

… the day after Iran walks away from a reasonable deal, the easiest thing for me to do in Congress is pass additional sanctions against Iran.

It would take about two days for me to be able to sign a bill like that. So we have the ability to exert additional pressure. But it's important for us to show that we've exhausted every possible avenue of diplomatic resolution.”

Iranian Foreign Minister Mohammad Javad Zarif’s visit to Saudi Arabia on Jan. 24 to offer condolences on the passing of King Abdullah bin Abdulaziz was the first ministerial-level visit by Iran to the kingdom since the election of President Hassan Rouhani in June 2013.

Rouhani issued a statement on Jan. 24 wishing “success and health for King Salman bin Abdul-Aziz [Al Saud] and prosperity for the Saudi government and nation,” and his “hope that ties between the two countries would expand in all fields of mutual interest during the time ahead.”

While the official Iranian position was a gesture of friendship to Saudi Arabia, Ali Mamouri explains the mixed reactions to the death of Saudi King Abdullah in Iran and among Shiite and Sunni communities throughout the region.

For example, Iranian hard-line cleric Ayatollah Ahmad Jannati celebrated Abdullah’s death and insulted the late king during a Friday prayer sermon, earning the condemnation of the states of the Gulf Cooperation Council.

“While many celebrated, others deeply regretted the death of the Saudi monarch who was known for his moderate and reformist views,” Mamouri writes.

Jean Aziz reports this week about the auspicious timing of the "secret" visit of Qasem Soleimani, commander of the Quds Force of Iran’s Islamic Revolutionary Guard Corps, to Beirut on Jan. 29, one day before Hezbollah Secretary-General Hassan Nasrallah’s speech in which he re-established the principle of deterrence and "proportional response" in Hezbollah’s dealings with Israel, as reported in this column last week.

Aziz writes: “Following the Israeli raid, talk circulated that Hezbollah’s decision to retaliate and avenge its fighters would consider the Israeli aggression and its repercussions. This incident turned the line stretching from Naqoura, located to the west of the Mediterranean Sea in the south, to the occupied Syrian Golan Heights in the east, into one single front; Hezbollah and its allies deal with it as one front subject to one operations order … Soleimani’s visit to Beirut represented an exceptional event, whose initial and most likely purpose was discussing how to deal with the confrontation between Hezbollah and its allies on the one hand, and Israel and its allies on the other, not only in Lebanon — as was the case since the beginning of the 1980s — but this time in Lebanon and Syria as well.”

Turkey’s pivot away from the West

“Starting from 2010, the AKP subdued the old Kemalist establishment and laid hands on 'full power.' With its newly found self-confidence, the party went back to its own ideological agenda. Its intimidating response to reactions from Turkish society served only to intensify those reactions. Growing political tensions dragged the AKP into a sharp us-versus-them rhetoric, in which the West morphed into a diabolical force behind 'the enemies within' — such as secularists, liberals and, especially, the Gulenists.”

“[A] question about the attack on Charlie Hebdo was “Who really did it?” Only 31% of participants thought 'radical Islamists' were responsible. Among AKP voters, the number was even lower, at 18%. The most popular answer was 'foreign intelligence services,' which typically implies the CIA, Mossad and the like. Of all participants, 44% opted for this conspiratory theory, which was even more popular among AKP voters, at 56%. This finding confirms the overwhelming acceptance of conspiracy theories in Turkey.”

Edward Dark writes that civilians in Aleppo are suffering from a fuel shortage during a miserable, cold winter:

“The US-led coalition’s tactic of crippling the finances of the Islamic State (IS) by hitting the oil wells it controlled in the east of Syria had the devastating consequence of causing a severe shortage of petroleum and its refined products across the entire country. Oil production was completely in their hands, and whoever wanted, including the Syrian state, had to buy it off IS via middlemen.

In a country where before the war mazot was abundant, subsidized and cheap so that even the poorest could afford to heat their homes, the current state of affairs was particularly painful."

Dark writes that for a brief period, the weather stopped the combatants as well:

“There was perhaps only one silver lining to the misery of the freezing cold: It got so bad one day that, for the first time in three years, no one in Syria died due to the fighting. The irony was that a cease-fire that countless UN resolutions, initiatives and diplomatic talks could not produce was achieved by Mother Nature’s own wrath.”

Israel reconciles itself to Hamas?

Ben Caspit writes that some of Israel’s leaders may be reconciling themselves to living with Hamas, at least for now:

“In other words, Israel is beginning to reconcile itself to Hamas as a governing body and the Hamas movement as the entity that authentically represents the Palestinian people. No one in Israel is in love with the idea. Hamas was, and remains, a terrorist organization whose charter calls for the destruction of Israel. It has no religious or moral mandate to conduct negotiations with Israel or recognize its existence. On the other hand, at the moment this is what the Palestinians want.”

The supposed change in the Israeli stance may be tested soon enough, as Adnan Abu Amer reports that Hamas is pushing ahead with plans to open the Gaza Strip’s seaport:

“Hamas knows well that the port’s operation — which was technically inaugurated Jan. 25 — should pass through legal and political procedures with Israel and the Palestinian Authority (PA), so that the Gaza Strip can connect with other ports on the opposite shores of the Mediterranean Sea. Yet, Israel’s refusal of the terms of the truce pushed Hamas to make a unilateral decision — in agreement with the various factions in Gaza — to open the port on Jan. 25. This could provoke Israel, and no one knows how the latter will react to the departure of the first ship from Gaza without its consent.”

Israel’s seeming realism in Gaza may in part be related to the deteriorating situation in the Egyptian Sinai Peninsula.

A correspondent in Sinai reports on the latest, and boldest, attack: “Organized and qualitative attacks targeted 10 military headquarters and bases in three different cities at the same time, including the largest headquarters of the army in Sinai, known as Battalion 101, in el-Arish. The attacks left more than 35 military personnel dead and 70 others wounded. This led to a trust crisis and raised the ire of the Egyptian people; meanwhile, military commanders made speeches confirming their control of Sinai and progress toward the eradication of terrorism.”