The snowstorm that blanketed the Middle East added to the misery of Aleppo’s residents and refugees, as children died from a lack of power, water and heating. 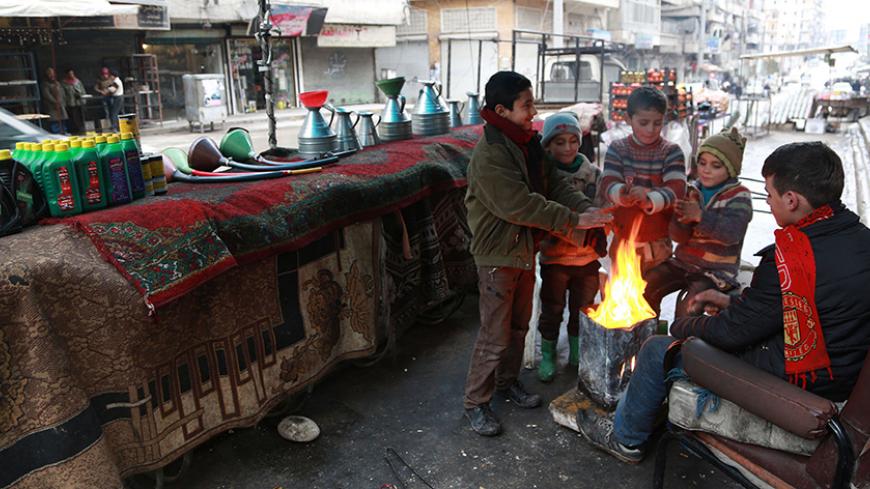 The snow that blanketed Aleppo brought misery to its inhabitants. It was just one more unbearable burden added to the horror and toil of the war. A freak winter storm that hit the region claimed the lives of children in refugee camps in neighboring countries, but also some inside Syria itself, including the battered city of Aleppo. The reason was quite simple: There were no means of keeping warm, and what little there were, the average person could never hope to afford. Where once children were overjoyed when the rare snow fell so that they could skip school and go out and play, they now feared that very same snow could kill them.

Wrecked by relentless war, Aleppo is now also freezing, with no power, no water, no gasoline, no cooking gas and no heating. A city hit by those chronic shortages was in no shape to cope with such a fierce winter storm. As temperatures plummeted below freezing, schools, businesses and government offices shut down. The city came to an eerie standstill as people huddled together for warmth, wearing their heaviest winter clothes indoors. Frostbite, cold burns and vascular diseases became commonplace; the people’s spirit was broken, just like their city.

Electricity from the grid was something people had forgotten about months ago, and if it came on it was only for an hour or two a day. There was little firewood in the city as most of the trees had been cut down the previous winters for heating purposes, and no oil (mazot) was available for heating. Whatever little mazot there was, was either bought up by the businessmen who run the industrial power generators that sell electricity in limited hours and quantities to select neighborhoods at exorbitant prices or was being sold on the black market for four times its price. Only the very rich could afford it. The government was carefully rationing the small quantities it had left, to keep vital services such as communications, hospitals and water pumps running.

Water was also a problem. The main supply was restricted due to damaged pipelines and lack of power at the main pumping plant in the city; running water only came on two or three times a week. People had learned to cope by putting 1,000-2,000 liter (264-528 gallon] storage tanks on their roofs. When temperatures fell, the exposed pipes froze, or even broke.

The US-led coalition’s tactic of crippling the finances of the Islamic State (IS) by hitting the oil wells it controlled in the east of Syria had the devastating consequence of causing a severe shortage of petroleum and its refined products across the entire country. Oil production was completely in their hands, and whoever wanted, including the Syrian state, had to buy it off the IS via middlemen,

In a country where before the war mazot was abundant, subsidized and cheap so that even the poorest could afford to heat their homes, the current state of affairs was particularly painful. It had become more rare than gold, and almost as precious. Living conditions had deteriorated and became unbearable to the point where people were offering for sale their belongings — including household appliances, cars, furniture, pets and mobile phones — to the highest bidder on social media sites for used items.

The government repeatedly promised that supplies and tankers were coming soon, but none arrived. Angry voices were raised publicly, even by the most ardent of regime loyalists such as the Chamber of Industry head Fares Chihabi, against what they perceived as government neglect and indifference to the plight of their city. Some jokingly reminded everyone that Aleppo was still a city inside Syria, and not in another country. Others referred to the city now only as Halabgrad, a reference to Stalingrad and a shared sense of suffering during the war. Even state media reporters such as Shadi Hilweh filed unprecedented reports highlighting the rampant corruption at gasoline stations, which were rationing fuel but where soldiers and officials would take bribes to let customers cut in line.

The government’s response was predictably very anemic, with yet more empty promises, and much fanfare made when the mayor went to an unfinished housing complex where the displaced were sheltered and promised an emergency 20 liters (5 gallons) of mazot for every family there — a quantity not enough for even a week. To add insult to injury, the government soon after raised energy prices, claiming it was by popular demand to stem illegal cross-border smuggling, which baffled just about everyone. The sad truth is that had it not been for the various charities in Aleppo providing winter clothes, warm meals and blankets, many more people might have frozen to death. It is estimated that at least 8,000 such displaced families have received emergency aid this winter alone in west Aleppo, according to the Syrian Arab Red Crescent — the state did little to nothing.

In rebel- and opposition-controlled areas, the situation was even more dire, as poverty was rampant and basic services were nonexistent. There was a fierce backlash against the perceived failing of the opposition, their interim government and their relief agency in providing even the simplest of aid. It appeared that both the Syrian state and the opposition had failed their people in desperate times, yet again.

There was perhaps only one silver lining to the misery of the freezing cold: It got so bad one day that for the first time in three years, no one in Syria died due to the fighting. The irony was that a cease-fire that countless UN resolutions, initiatives and diplomatic talks could not produce was achieved by Mother Nature’s own wrath. Regardless, the Syrian people were happy to see the storm go, but remained resigned to the fact that they were now not only at the mercy of men and their war machines, but the fickle-tempered elements, too.